The Medium is a psychological horror developed by Bloober Team. The game was released for both PC and Xbox Series X/S. It’s actually one of the first few games to show off the power of the Xbox Series so it is a rather anticipated release. The game truly brings the skills of a medium to life with its unique way of displaying a medium’s gift. The overall game is gorgeous from the get-go, but starts to get repetitive when it comes to gameplay later on.

After a very emotional start, players take on the role of Marianne as she receives a call from a man named “Thomas” who knows of her supernatural ability to communicate with the dead. Thomas offers to explain her past to her along with an explanation of the recurring nightmares she has about a girl appearing at a lake. Thomas asks her to meet him at an abandoned Soviet Union vacation resort. Our story truly begins once she arrives.

The Medium is quite unique in the way it shows how a psychic is able to communicate with spirits. I love to watch documentary shows on ghosts and other supernatural elements which often showcase a psychic communicating with or asking to speak with the dead. They constantly mention how they can see stuff that a normal person cannot. The Medium really nails these ideas with its split screen presentation of Marianne in the normal world and spirit world at the same time. Sometimes we see her communicating with a ghost in the spirit world while she appears to be speaking to nothing in the normal world. 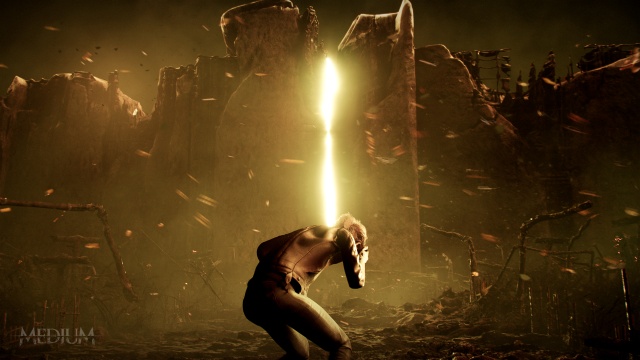 The spirit world is presented as a surreal landscape. It is full of dark colors and symbolic objects. The spirit world often looks like a wasteland. Hands might stick out of a ceiling and other imagery of the dead is in constant view. It has been mentioned that the developers modeled their spirit world after Zdzisław Beksiński’s spiritual works of art. The game’s spirit world is a truly impressive view of an afterlife.

The overall gameplay in The Medium reminds me a lot of Murdered: Soul Suspect. You wonder throughout linear environments in search of the next objective needed to progress while picking tons of collectibles, files, and items along the way. The Medium is far more interesting than Murdered: Soul Suspect, but it also carries some of the same flaws present in that game. Besides solving puzzles there is a bit of platforming every now and then and some chase sequences. The game has some variety, but by the end, I got tired of repeating the same old “balance yourself on the narrow beam” or “climb this ledge” while creepy stuff happens. It literally devolves into the aforementioned situations in the final parts of the game.

The majority of the game is spent alone, but sometimes an evil presence will appear. Sometimes you’ll have to sneak by an enemy while staying behind cover and holding your breath. The game does well to keep the enemy encounters interesting overall. There are a few chase sequences here and there to break up the monotony of exploration. It’s rather hard to die in the game overall. The only ways to die are to be found by an enemy that shows up every now and then or spend too long outside your body while controlling your spirit. 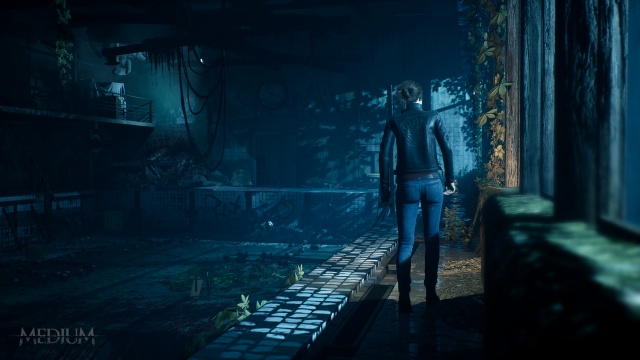 The character models look around the same as those you find in most horror games. They aren’t incredibly detailed but they do the job overall. The character models do have some great motion capture however! The environments are where the party’s at when it comes to graphics. Environments are absolutely fantastic in whichever world you choose to inhabit. The detail is rich and the atmosphere is definitely there. Eventually, the areas get really dark in the normal world and you’ll be forced to carry around a flashlight to illuminate your way. Sometimes the flashlight is all you have to guide you to your next destination in some super dark corridors. Bloober Team definitely knows their creepy atmosphere and locations since they have been doing well in these categories ever since Layers of Fear.

Oh, and then there is the sound. Oh, my dear, the sound! Akira Yamaoka and Mary Elizabeth McGlynn. Do I need to say any more? The soundtrack has many vocal tracks and moody pieces. If you like Silent Hill soundtracks, you’ll find something to like with The Medium. The overall sound in itself is really great as well. Sound effects are well placed and fitting. The entire cast of voice actors do a great job during cutscenes. The voice actress that does the voice for Marianne is so perfect. The cutscenes can really bring the emotions during specific key scenes. I don’t think I’ve ever gotten teary-eyed during a game’s first few cutscenes like I did with this game.

The Medium has literally everything going for it – perfect sound, great graphics, unique way of presenting a medium – but when it comes to the gameplay, it’s like the developers just couldn’t put it all together well. The majority of the game isn’t all that exciting to play. It has some great ideas, but it’s like the developers didn’t want to challenge the player too hard throughout the majority of the game. The final area is the only area that really showcased some memorable and creative puzzles. Just about every other area up until then just had some minor puzzles that could be solved easily or either had a solution that was not too far away. The gameplay deserved to be more memorable with all the creativity that is displayed in its mechanics. Overall, the game is about 8 hours long (including reading files). There is also next to no replay value unless you skipped some collectibles along the way and want to replay to go back after them. The game seems to only have one ending. The game is definitely worth a try for horror fans, mainly for the overall experience, but I definitely recommend trying before buying.

The Good:
+ Fantastic music and sound – this is easily the best part of the game
+ Very creative way of showing a medium’s gift (split screen)
+ Cutscenes are well done (good motion capture)
+ Good atmosphere and environments

The Bad:
- The overall gameplay gets tedious and repetitive
- Almost no replay value

Final Rating: 70% - The Medium is a decent psychological horror from the start, but it’s rather hollow when it comes to gameplay.