Qix is a classic arcade game that is just classic enough to have its gameplay emulated from time to time, but not classic enough to be remembered as well as games like PAC-Man and Space Invaders. It went through a revival of sorts in the 90s with Gal Panic, a game that took the core Qix gameplay and placed the play area over anime pin-up girls. Mokoko is the latest game to revive Qix's gameplay, although it's more a tribute to Gal Panic than to Qix. It takes the gameplay from Qix, the anime pin-up girl playfield idea from Gal Panic, adds a few twists, and wraps the whole thing in a bizarre narrative.

If you're familiar with Qix, you already have a pretty good idea of what to expect from Mokoko gameplay-wise. The object of the game is to capture 70% of the play area. To capture a section of it, you must draw a line from any edge to any other edge. Once you make contact with the second edge the area within the rectangular polygon you've created is cleared, adding the area captured to your total percentage and revealing part of the pinup image beneath. 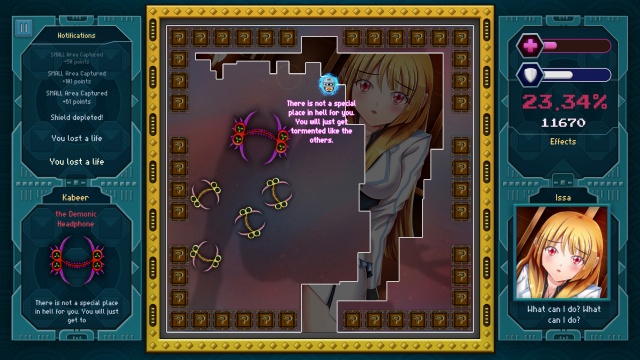 Making your task more challenging are the enemies that roam the play area. If one of them comes in contact with a line you're drawing before you can close off an area, a spark races down the line. If the spark catches you before you capture the area, the line you've drawn disappears and you'll lose a life. These enemies can only roam the area that you haven't captured, so the more you capture the more challenging it becomes to capture more. However, you can turn the tables on your enemies by enclosing them within an area as you capture it, thereby eliminating them from the level and triggering a special effect such as temporarily freezing the remaining enemies. Adding to the gameplay are boxes in the play area that act as obstacles to your lines, but will award you with bonus points if you capture them.

Each level features a unique set of enemies, with their own attack styles and special attacks. In line with the game's strange sense of humor, one of these enemies creates pop-up ads that obscure your view of the play area while another creates "lag" that will freeze your movements for a few seconds.

If you capture the required area of the level before you lose all of your lives, you'll clear it and unlock the next. You'll be given a score at the end based on your play and a few other factors such as the number of lives you have remaining. The game rewards you for being more aggressive, so capturing a large area at once will earn you a higher score than capturing that same area one small piece at a time. Once your score is tallied, you'll be able to instantly see if it was good enough to place you on the leaderboards. 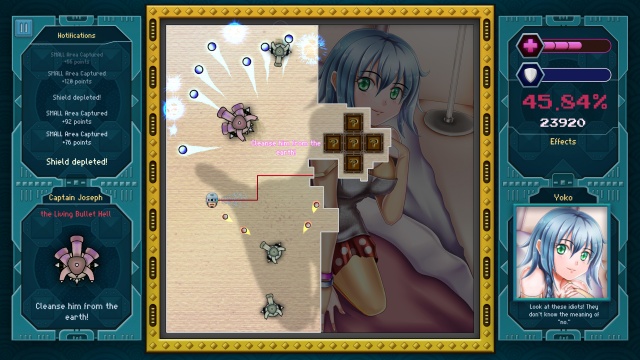 The game's story is divided into eight chapters, each focused on a different girl for you to rescue. Each chapter includes three levels, and each level can be played at one of three difficulty levels. You can go back and play any level that you unlocked at any time to try and beat your previous best or simply to play it again. Since Mokoko is an arcade game, the levels will never quite play out the same way twice and as such are essentially infinitely replayable. Completing levels also unlocks different outfits for each girl to wear while you're playing a level, but to access these you'll need to download the free uncensored patch separately since the "outfits" are actually the removal of their outfits.

The game does deliver the core gameplay of Qix while adding a few new elements to increase the challenge. The early levels are fairly easy to beat on the first time through at the medium difficulty level, but later levels will probably take a few tries before you determine the best way to beat them. Unlike an endless arcade game, each level is a self-contained one-shot and you can clear the entire game in one sitting. Once you do, you'll unlock an arcade mode that will throw the levels at you in random order, but it's rather pointless since you can go back and play any level that you want once you clear it. There's some fun to be had beating the game, but once you do you'll have to be the kind of person who really wants to place on the leaderboards or else you'll probably lose interest in the game not long after you beat it, and as noted it won't take long to beat it. Personally, I'd rather find an old release of Qix and play that, seeing how far I could get as the levels get faster and harder to beat.

Final Rating: 55% - There's some fun to be had with Mokoko's Qix-style gameplay, but that fun won't last for very long.