If you played Little Nightmares, you’ll know what to expect from Little Nightmares II. There are some evolutionary changes to the gameplay, but overall this new nightmare will be similar in style to your last nightmare. For those of you new to the franchise, you don’t have to play Little Nightmares before starting on this game as it is a self-contained story and doesn’t make any assumptions about your familiarity with the previous game (although you may want to play the first simply because you missed out on a good game when it was first released).

Little Nightmares II is best described as a puzzle/stealth horror game. You play as Mono, a child who’s the only remotely human person in the strange world he finds himself in. Well, not entirely the only one. Accompanying you on your journey is Six, the young girl who was the protagonist in Little Nightmares. Together you set off on journey to reach the Signal Tower, which seems to be the source of a mysterious signal controlling and distorting the world around it through its televisions. While the first game took place within a large ship known as the Maw, Little Nightmares II will take you through five distinct levels each with its own unique theme. While the overall look of the game is consistent across these levels, each has its own distinctive traps and hazards, enemies, and primary antagonist who will stalk you throughout the level (and who you will finally have to face down at its end). The horror atmosphere in the game is surreal, creepy, and unsettling, but not at all gory – you face a lot of death in the game, but none of it is graphic or grotesque. 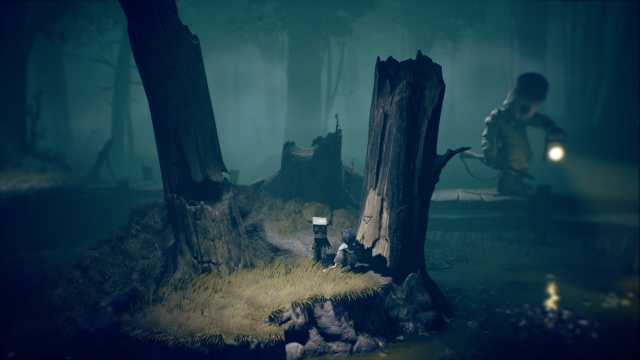 The goal of the game is to traverse the levels without being detected or falling victim to the pitfalls and traps that they are filled with. Should you meet your demise at the hands of one of the denizens of the game’s world, by triggering a trap, or through a simple misstep, you’ll be restored to life at the start of the sequence during which you died. Death is frequent as you learn your way through the levels, but the penalty won’t set you back too far and you’ll quickly get another chance at what you failed moments before. The puzzles in the game are primarily traversal-based, but you’ll have plenty of chances to reason your way through more traditional puzzles using your wits, trial and error, and clues in the environment. You’ll also face a few chase sequences, but they’re survivable with average platform gameplay skills – this isn’t a game that’s overall designed to test your reflexes more than your brainpower.

Little Nightmares II adds a new gameplay component not seen in the prior game in that you can now wield weapons. Weapons aren’t something you’ll carry with you throughout the game, when they do appear they are very specifically tied to the current puzzle sequence you’re in. Weapons are usually lead pipes or hammers, and are used to break through some walls and doors as well as to protect yourself from attackers. In the outsized scale of the game’s environments, Mono is about the equivalent size of a housecat so the weapons are overly large and difficult for Mono to swing. The wind-up and follow-through take a little time, so fights are not so much button-mashing affairs as they are another form of timing-based puzzles. Swing early and your strike will land short and you won’t have time to bring the weapon around for another try. Swing late and your enemy will be on top of you before you even have the chance to hit them. To be honest, it can be a little frustrating when the game throws several enemies at you in succession, but with a little perseverance you can work out the timing and survive the onslaught.

Even though Six accompanies you for most of the game, Little Nightmares II isn’t playable in co-op – Six is strictly an AI escort. If you’ve dealt with annoying AI compatriots in the past, you’ll be very pleasantly surprised by Six. Six never gets lost or hung-up on the objects in the environment, and she is always where she needs to be to give you a boost up or to reach a hand out to help you make it across a gap. If you watch her carefully, you may even find her subtlety giving you a hint on occasion. Most of the time you only really notice AI-controlled allies when they are particularly brain-dead, but sometimes you really take notice because they are so much better than you’re used to seeing. I haven’t seen a standout AI catch my attention like Six has since Bioshock Infinite’s Elizabeth. She’s definitely an asset rather than a liability, and in a nightmare world like this it’s good to have someone on your side. 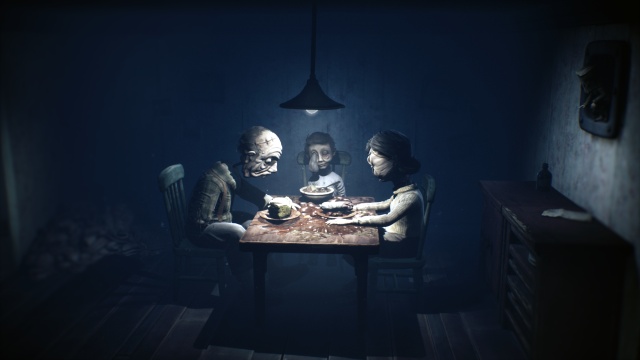 For those of you who like collecting things, Little Nightmares II has two sets of items for you to pursue. The first is glitches, which appear as shadowy forms resembling children. These can usually be found the traditional way, that it is by looking for places just off the beaten path. The other collectible is hats and these can be equipped by Mono to change his look, well, the look of his head anyway. Hats are a little harder to find and are often hidden behind puzzles you’ll have to solve to earn them. If you miss the collectibles in one of the levels, you can return to them later in an attempt to complete your collection or to fulfill your need to complete 100% of the games that you play.

Little Nightmares II excels at creating a creepy atmosphere through its twisted nightmare dreamscape. You’ll feel compelled to keep pushing forward, as much to help Mono escape from this world as to discover the mystery behind the Signal Tower. Death awaits around every corner, but I felt that each death was a learning experience more than it was a source of frustration. After each one, I learned a little something, be it when to swing a pipe, where to make a jump, what to avoid knocking over, or that loose floorboards are probably a trigger for a trap. And with each death I picked myself up and pushed further on, because I had to see how this nightmare ended.

Final Rating: 90% - A nightmare you’ll be happy to see through to the end.