WARSAW is set during the Warsaw Uprising during World War II. The Polish Underground Army tried to take advantage of the approach of the Red Army to kick the Nazi occupiers out of their capital. Unfortunately, the expected aid from the Soviets never came as the Red Army let the two sides fight it out so that it would be easier for them to occupy Poland once Germany was defeated. Facing overwhelming odds and firepower the uprising was crushed, and WARSAW now gives you the chance to see if you can win the fight despite the superior forces arrayed against you.

WARSAW is at its core a rogue-like, turn-based strategy game. It takes a lot of inspiration from Darkest Dungeon, so if you've played that game you've already got a pretty good idea of what it's like playing WARSAW. In WARSAW, you'll start with a squad of four characters, each of which has their own set of attacks, buffs, and debuffs. You'll need to carefully choose how to set your line with the characters that you have as their attacks and abilities are all dependent on their position in your line and/or the positions of the enemy soldiers you'll face. Positioning is so important in the battles that some characters have special abilities that can force enemies into different positions so that they can no longer effectively attack your squad or to move your own squad members into more advantageous positions. When a new turn begins each combatant is given a set of action points and when everyone is out of points the next turn begins. 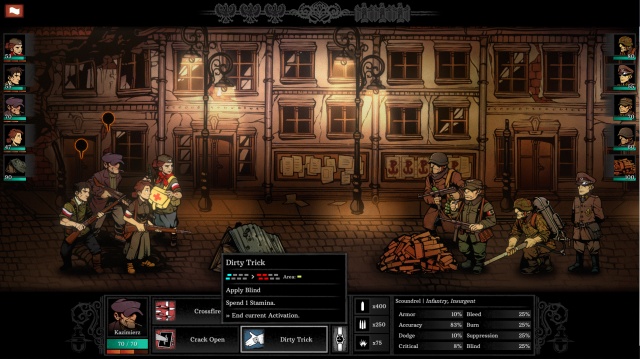 You'll begin each turn in a game at your safehouse. This is where you can try to recruit replacement soldiers, give your existing ones time to heal, and manage the resources that you need to purchase ammunition and equipment. Occasionally you'll be presented with a random encounter and asked to make a choice based on the information presented to you. You'll have to go with your gut feel on which opportunities to pursue and which to pass on, because making the wrong choice can have devastating results. The safehouse is also where you'll select from the available operations. Each operation is set in a different district of Warsaw, and your overall goal is to keep morale high enough in each district to keep the Resistance going. Completing an operation will boost the morale in the district and ensure that your resources keep flowing. Failure has the opposite effect and can lead to lost districts and dwindling supplies.

Once you select an operation you are taken to a map of the district on which your squad is represented by an icon. You'll move the squad through the streets in an attempt to locate your objectives, which is in itself is not an easy task as you won't be provided with much guidance as to where they are located. When you get close to an objective, an arrow will appear indicating its general direction, but these arrows aren't always that helpful as Warsaw's winding streets make it difficult to tell how to get from one point to another. You would think that one of the great advantages a resistance force would have over an occupying army is familiarity with the city streets, but I continually felt lost in an unfamiliar place. You can't scroll the map around to see which road to take from each intersection or city square, leaving you to guess if you're heading down an alleyway, a major avenue, or a cul-de-sac. This is more than an annoyance, though, because each operation gives you a limited number of action points to use when on the map view, some of which are expended as you move. It's not entirely clear how much you are draining the amount allocated for your mission as you are moving around, so there's a chance that each accidental wrong turn that brings you back to where you started could potentially cost you the mission in the end. 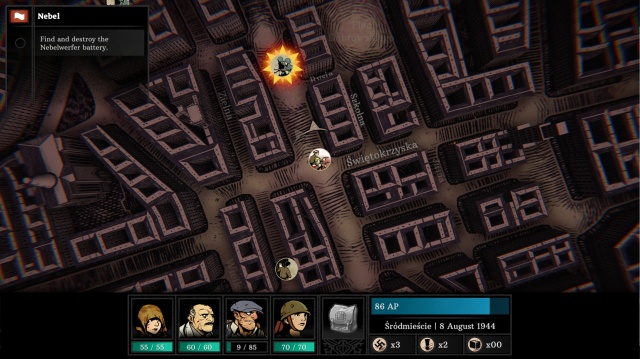 As you move around the map, German positions and patrols will be marked and there will be a circle around them representing the German line of sight. Should you enter one of these circles you'll initiate combat. Some of these can be avoided by carefully maneuvering around their circles of awareness, but once again your unfamiliarity with the map will make it impossible to decide if taking the long way around will be potentially more costly than initiating the encounter. Another issue is that there is no way to tell the size of the force you'll be facing before you enter a battle. This can be devastating, especially in operations in which you're tasked to harass the enemy, because there is a huge difference between taking on three versus six Germans.

Once you fail a couple of operations, things will begin to snowball out of control. The lack of resources and low morale will make it difficult for you to procure ammunition and recruit replacement soldiers, making it that much more difficult to succeed the next time you leave the safehouse. Once you reach this point, you can find yourself with a squad of two fighters who will run through all of their ammunition within the first or second encounter. This is probably pretty realistic in terms of what the real Polish Resistance faced during the Warsaw Uprising, but it makes for a very difficult game. It's not only hard to succeed, it always feels like it's hard to succeed and that the best you can do is to push out your inevitable defeat a little farther. You can almost view WARSAW as a game in the mold of Oregon Trail, a game in which the difficulty in succeeding brings home the lesson of how difficult it was for the people who actually had to live through those times. It's hard to recommend the game to anyone except those looking for a brutal challenge or those with an interest in the historical event represented by the game.

Final Rating: 66% - WARSAW is the Oregon Trail of the Eastern Front.