Reigns: Game of Thrones is one of those games that provide surprisingly challenging gameplay from a set of a few simple rules. You are placed in the role of one of the ruling characters in Game of Thrones, and you goal is to manage the four pillars of your kingdom, military, religion, populace, and treasury, such that your control over any of them is never reduced to nothing. Should that happen, you'll be summarily executed, assassinated, eaten, or face any number of other fates that all result in your demise and the end of your game.

On each turn you will be presented with a card notifying you of an event or informing you about the results of a prior event. Events can be reports from your advisors, messages from allies or rivals, or actions to be taken. For each one you'll have a choice of how to respond and you'll make your decision by swiping the event card to the left or right. All actions have consequences in the game, both immediate in terms of an effect on one or more of your kingdom's pillars or in determining which events will follow later in the game. The game will let you know which pillars will be affected by your decision, but whether that effect will be positive or negative will require you to carefully read each card to determine its possible impacts. Sometimes a card will have both positive and negative effects, so you may be forced to take a particular action to save your hide for the moment no matter the consequences down the road. The cards that you see will be randomized so that each game will not start out in the same way, but some of the cards you will see later in a game will depend on the choices that you made earlier. 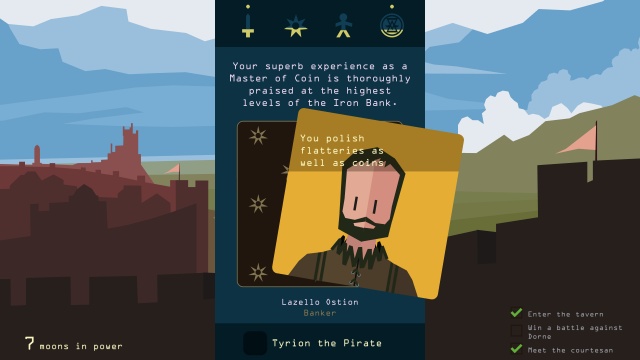 The game is set after the events of the seventh season of the HBO version of Game of Thrones, but don't look at it as a way to get a glimpse into the events of the upcoming final season of the show. Each game that you play is presented as a vision of a possible future seen by Lady Melisandre as she stares into a fire. At first you'll have the option of playing as only a couple of the show's characters, but as you play and unlock events in the future timeline it will open more characters for play as Melisandre chooses to focus on her visions of other characters and their fates. It's a clever device that allows you to make the choices that you want without feeling like you're breaking canon the whole time. There are a lot of "what if" scenarios for the series' fans to explore, making the game in some ways a Season Eight simulator. The Game of Thrones license also allows you to move away from purely reacting from one random card to the next as the events you'll face will be customized and appropriate for the character you're currently playing as. Some choices will even lead to a sequence of events that tie into a character's narrative and lead you to that character's victory over the White Walkers and allow them to secure the Iron Throne for themselves. Pursuing this ultimate goal will require you to rely on your knowledge of each character and selecting a path that plays to their strengths. You can certainly play the game without any knowledge of Game of Thrones, but you will probably find it more difficult to both play and to follow.

Reigns: Game of Thrones is easily played in small chunks of time when you need a distraction, but it can easily suck you in for longer than you intended. While the mechanics of the game make for a challenging solitaire experience, the game has a greater value to Game of Thrones fans as they can play out the many directions that Season Eight may take while they wait for HBO to debut Game of Throne's final season.

Final Rating: 88% - A great way for Game of Thrones fans to kill time waiting for Season Eight to premier.