The time has finally come! The Resident Evil 2 Remake has to be one of my most anticipated games of the last few years, and of course nostalgia was a huge source of that anticipation. It was over 21 years ago and I was 14 years old when the original RE2 came out. I never played the first RE, but the hype was so strong I had to get my hands on the game. I remember a buddy and I got the game the same day and we started the game at the same time at our respective homes. He chose Leon and I chose Claire. If memory serves me correctly, this type of choices in a game was a rare occurrence at the time. I'm not even sure it was evident at the time the stories would vary between the two. We were talking to each other on the phone and describing everything we were experiencing. Indeed slightly different, but also some similarities and of course the screams of horror. I will never forget when the dogs jumped through the window in a narrow hallway within the police station and scared the heck out of me. The graphics, sound, and environments were amazing, puzzle struggle was real, and I hate puzzles. However after the police station my memory gets a bit fuzzy. I remember playing the game over and over again and trying the alternate Leon storyline, but can't seem to really place what happened after the police station. Though overall I remember loving the game and continued the series after that to this day. Question is: did Capcom do the remake justice not only for the fan base, but for the newcomer as well?

Since I vividly remember playing Claire my first playthrough on the original I wanted to run as Leon for the remake. For those that aren't familiar with the series, Leon is on his way to Racoon City on his first day on the job as a Racoon City police officer. However, he instead finds himself facing a zombie outbreak impacting the city as a whole. He ultimately makes his way to the police station where the main focus of the game takes place. I know it wouldn't matter what profession I was in, first day or not, I would be running in the other direction. Luckily there are heroes like Leon to face fear head-on. You eventually make it to the police station which may seem like a safe haven, but it is really just the beginning of your story. Barricaded in, Leon must find another way out of the station. Over time in reading journal entries or newspaper clippings you learn a lot about what has transpired over the course of the outbreak. As the story takes shape you make your way out of the police station to meet more characters that build on the fact that maybe this outbreak didn't just occur out of nowhere. Racoon City is the home of a virus developed by a company called Umbrella and you aren't the only one trying to find the origin of the outbreak to put a stop to it. 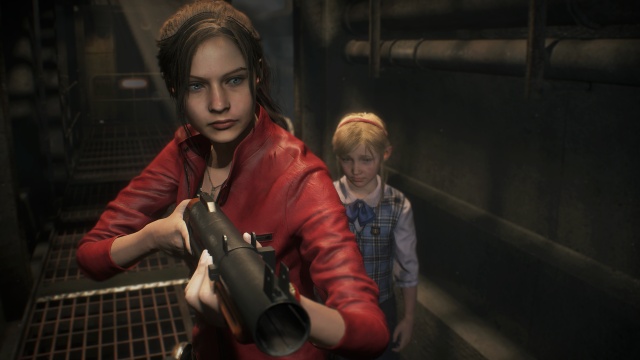 The Resident Evil series has never had huge depth in plot, but it does provide a lot of context surrounding it and the remake is no exception. Both Leon and Claire have two sides of their stories to complete, an A and a B. That is over four play-throughs! Once you complete the first play-through for a character the B side opens the opposite character. For example, when I completed Leon's play-through it opened Claire's B play-through. In the original I only remember two sides of the story and no more, though don't quote me on that. In the modern day gaming industry it is almost unheard of to have so much replay value and it doesn't end there! Also when you beat the game you are graded based on your overall performance. At first glance the grading criteria is based on the amount of time to complete along with total saves. My first play-through was graded a B, which was a surprise to me because I knew I saved a lot and wasn't very quick. I had 32 saves and total game time of nearly eight hours. Despite the grade, not only did I unlock another side of the plot, but a ton of collectables such as player and enemy models, and costumes I could dress my protagonist in. Historically RE games are known to have challenges that open additional content and the remake is full of it. Beat the game in a certain amount of time on standard and hard difficulties and you will unlock various weaponry. Continue to beat the game normally and you will unlock other more challenging and themed play-throughs. Of course the multiple play-throughs won't take the same amount of time as your first. You do eventually learn the game like the back of your hand and it becomes much easier the more you devote time to it. Additionally to spice things up, not only are the routes different for each character, but the weapon availability is as well. The environments are the same, but the puzzle items may be in different places and the weapons are completely different. For one, Claire gets a grenade launcher and Leon gets a high-powered pistol. 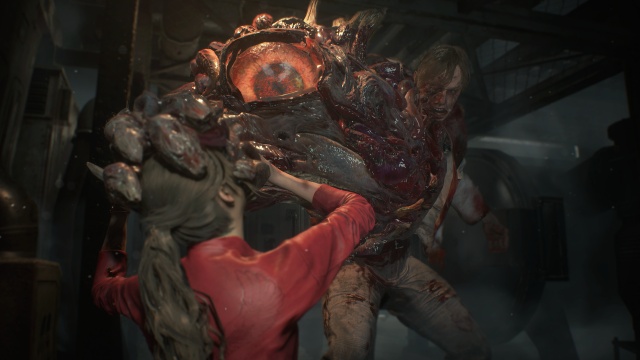 So how was the near eight hour experience? Intense compared to the original. I was younger and hated scary elements. I was probably more on edge back then, too. I felt the remake focused more on the survival aspect than horror. I can't think of one situation that scared me in the remake, though there were some surprises that made me clench my butt cheeks and run in the other direction. The zombies all act the same, slow moving and yet can turn on you in a second. Thankfully you can dismember them, meaning you can take out their kneecaps and arms to keep them at bay. Of course to put an end to them completely you will need to deposit some ammo into their head. Sometimes they will even play dead and really aren't so beware! In the end you start learning each enemy's exploits, thus playing smarter to avoid using all of your ammo. In some situations it is even a better tactic to just run, but where is the fun in that? Initially the biggest challenge for me was inventory management. There were so many items to pick up, but only a small number of slots to use. I was constantly asking myself what could I do without and questioning if an item was for an upcoming puzzle. Thankfully there are chests you can access through the game that act as storage. Whenever I would get an item that I knew I wouldn't immediately need I would deposit it into storage. Over time you eventually expand your inventory lessening the OCD. Overall item placement is some of the best I have experienced. The devs made progression so natural with the item placement and made sure you experienced the entire environment before moving on. Even the puzzles aren't on the peripheral destruction level of frustration. but can take a moment to think through. The most lackluster experience for me had to be the boss encounters. I don't really recall them in the original, but in the remake they felt few and far between, short, and easy. Sure, I was playing on normal difficulty, but the exploit to defeat them was always evident. Continue to take advantage of the exploit, rinse, repeat. One encounter just required you to dodge multiple times. While a neat experience, it only lasted for about 30 seconds. To me they all fell flat but definitely fit with the gameplay and story, which is their only redeeming factor.

Back to the original question at hand, does the remake appeal to the masses or just the fan base? If I weren't already a fan of the series, I am not certain I would choose this game to try and get on the bandwagon. If you are a fan of survival horror, then there are plenty of other independent story-based games to experience. I think this is a true nod to the original and fan base to scratch the nostalgia itch. RE2 remake is probably one the best remakes, if not the best remake, available. If you are serious about wanting to try an RE game, then I would recommend RE 7 as it is still my favorite out of the series.