Gore is a first-person shooter set about 50 years in the future, a time when street gangs have grown so powerful that they are able to control entire cities.  In response to this problem, a desperate government develops a highly advanced training simulator to train a new breed of soldier.  You are that new soldier and join the fight to take control of the streets back from the gangs.

This run of the mill dark future story is really just a thin glue used to string together the missions of the single player campaign.  The campaign is really more of a training mode for online play, and the levels are very similar, if not identical, to the multiplayer maps.  As a result, the mission maps have a 'circular' feel to them, and you will often find yourself passing through the same locations a few times while trying to find your way to the next level.  This is not entirely a bad thing, as many multiplayer-focused games use the single player mode to give players a little practice before venturing online.  In Gore's case, though, the campaign won't help players too much as the enemy AI is very poor.

Enemy attacks often follow the same script: notice player, charge player, stand in one place shooting at player while player kills you.  Sometimes enemies will move around a little or even jump down from higher places, but you'll spend a lot of time shooting stationary enemies in the head.  The AI enemies are also horrendously bad shots, even when standing a few feet in front of you.  At the game's higher difficulty levels their aim improves a little, but you still are left wondering how they took over any cities when they can't even shoot straight. 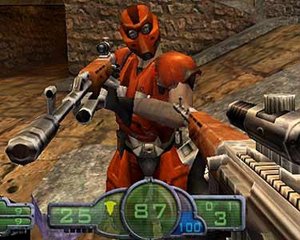 The single player campaign is further hindered by some serious interface issues.  The first is easily fixed, but the others will prove to be a major point of frustration.  The first issue is with the default control scheme, which doesn't use anything close to the "WASD" scheme that has pretty much become the de facto standard in FPS games.  Arrow keys are used for movement, the E, S, D, X keys to look around, and the right mouse button to jump - one can only imagine that the game's designers must have eight inch pinky fingers.  Luckily the key layout is completely configurable, so you can change the keys to something a bit more familiar.

The other issues are not as easy to fix.  The first is that the single player campaign does not save missions automatically as you progress.  If you sit down and play your way through the first several missions and then die, you won't be able to replay the prior missions.  Even worse, should you exit the game at this point, you'll be stuck starting the campaign over from the very beginning.

To make matters worse, even if you diligently saved your progress every so often, you may not be safe.  The saved game interface is a little screwy, and it is easy to mistakenly think you have saved your game when in fact you haven't.  Some successfully saved games don't seem to work properly either.  After you select a saved game to load, the game will go through all the motions of loading a game only to kick you back out to the main menu screen.

Unfortunately, the campaign is the only way to play the game offline.  There are no bots available to play against in simulated multiplayer games offline.  So if you're a single player kind of guy or gal, Gore is probably not the game for you.

All single player issues aside, Gore does inject some interesting features into the FPS formula.  The first is that any armor obtained actually appears on the player's character.  If it takes enough damage to be destroyed, the armor will be removed, providing a nice visual clue as to your enemy's strong and weak spots.  The next interesting feature is that of stamina.  In Gore, doing a lot of running, jumping, and climbing, or even carrying heavy weapons will reduce your stamina.  Should your stamina fall too low, you won't be able to move, making your doubled-over, wheezing body an easy target for your enemies.  Finally, look down at the ground in Gore and, lo and behold, you'll see your feet - not that seeing your feet has any effect on your gameplay; it's just a visual surprise for gamers not used to seeing them in other games.