As with many games over the years Day of Infamy started as a mod for Insurgency now turned standalone game, one of the most memorable and successful of those mods being Counter Strike. Well watch out because Day on Infamy could be the next successor. Simply put, Day of Infamy is a tactical close-quarter combat FPS based in WW2. Funny how over time the old war-based games go stale and then resurface again in full force. Battlefield tried their hand with an interpretation of WWI and now Call of Duty is going back to a World War 2 scenario. But I tell you what, Day of Infamy feels like a solid replica that delivers an intense authenticity that none of those games have. The immersion factor is through the roof and is filled with many memorable moments in each match played.

There are eight classes to choose from each with their own set of gear and abilities. Depending on the game type the number of each class you can have is also limited. For instance, in most game types you can only have two officers and two snipers. This of course limits stacking similar classes and more importantly provides a genuine sense of tactical combat.

I won't bore you with details on all the classes, but I will highlight the most notable in my opinion. The officer is the most unique in the fact that it can call in various types of air strikes based on the game type. Artillery, which again varies depending on the faction and game type, but is a pure offensive attack and does heavy damage, smoke used as a utility for any attack or defense, and resupply to restock your fellow allies. The only problem is you can't do it solo and require a radioman. If you are in the radioman role you can see where an officer is anywhere on the map and head towards them like a moth to a flame. Once there the radioman only has to be in proximity for the office to call out the command with their binoculars. The strikes aren't instant and take some time until a plane or planes actually show up and once they do, look out, because all hell is about to break loose. Even if you are a friendly and are in the vicinity of the strike you will either have your noggin rocked or will die. The sound and explosions are some of the best. At one point there is silence or brief cover fire and then you hear the buzzing of the plane and the whistle of the bomb strike leading to your impending doom. Again you will either die instantly or your ears will be ringing from the blasts of the explosion which is a really nice touch. Taking cover or lying flat on the ground does seem to help survive a bit more which makes sense given the blast radius and debris flying around; again the subtleties are a very nice touch and complete the immersion experience. 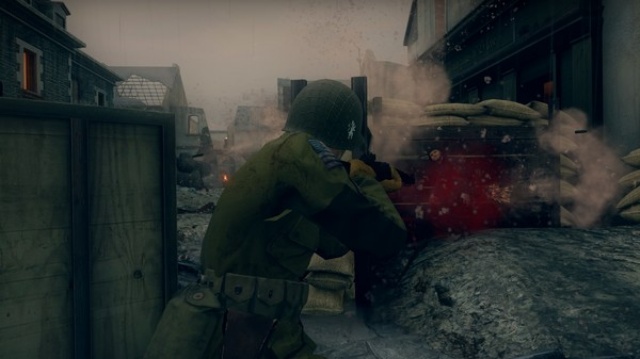 The next unique class is the engineer. While they have the regular arsenal as the other classes they are important on some maps and game types due to their ability to destroy specific objects with explosives. These are usually cracked walls that you can clearly identify as destructible and are typically a prime method of advancing to a point on the map. While that does sound ideal and very strategic most engineers I encounter would rather see your corpse explode than a wall. Very dramatic when you are running from building to building or in an open area and see rockets flying across your path.

This other classes may not be so unique, the machine gunner and support classes, but they're a bit unique to me. The reason why they are unique to me is that they are essential in putting down cover fire for your mates to advance through the map. The problem is you can be very exposed and die to sniper fire or someone sneaking up on you. The class is one of the most fun because you are toting a massive machine gun which once setup by laying down and aiming you are one of the loudest and boldest entities in the game. The clip feels infinite and with a slight burst you can mow the enemies down or lay down on the trigger and unload on a bunker as a scare tactic for your allies to march forth. On the receiving end of the machine gun it can either be a quick death or a pants-soiling moment when your screen starts to shake, your ears ring, ricocheting bullets pinging off objects or penetrating walls, screen starts to blur your vision, and again one of the loudest noises in the game. It definitely make you rethink your approach to the situation. One of the easiest ways out of those situations is to call it out to your fellow sniper teammate or smoke'em out.

Lastly one of the coolest classes is the flamethrower class. Who in their right mind in real life would strap a tank full of fuel on their back and race into a battlefield? All classes already have a huge target over their head (except maybe the sniper) but the flamethrower is basically announcing themselves almost as much as the machine gunner. Though they might be easily exposed if used correctly they are also some of the deadliest. Run up to a trench or bunker and easily clear out a group of enemies with one click. Having trouble pushing through a room? Have your flamethrower class blast a few flames in the windows or door to flush them out. It may sound morbid but there is nothing like rushing a point, burning out the enemy, and hearing their screams while they burn. 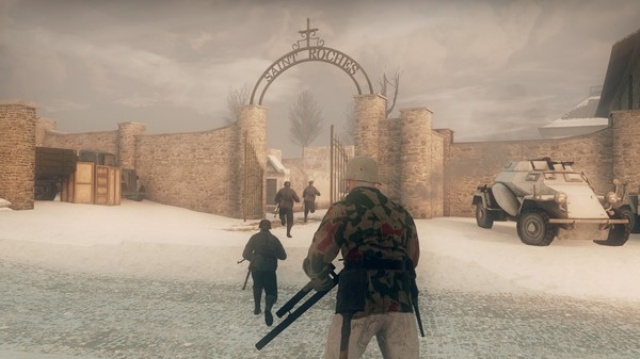 There are five game types to play, but to me they all feel the same and revolve around attacking or defending points. Some maps are balanced in such a way that it's more of an attack/defend situation where others are evenly matched and both teams are attempting to conquer and maintain captured points. The huge difference depending on map and game type is the starting waves for each faction. Waves are the amount of times a team can spawn in a given match. Die quickly and your team will burn through their spawns and more than likely fail the objective. When the wave number reaches zero no more spawns until your team gets a set number of kills in a row or an objective is taken. More than likely by the time the wave counter reaches zero your team has already lost, however in a more evenly matched game both teams may be down to zero and the game turns into a hide and seek match. The biggest problem of the game is the spawn timer. Sometimes in a match if enough of your teammates die someone can go back and regroup which means your team is spawned early from the auto spawn timer. Normal wait times are 30 seconds which is way too long, though I get it. It's like the game is giving the opposing team an advantage for doing well and killing off players and encouraging players that do die to learn from their mistakes and not die so carelessly. That's another tough deal for most people especially those from a Call of Duty or Battlefield background. Day of Infamy is not a run and gun type game, but more of a slow and steady chess match. Most games I played go for 10-20 minutes depending on the situation. Not to say all games last that long, but I think 15 minutes would be an average and the quickest was 5 minutes. Typically those quick matches are because the winning team had captured all the points in a match.

There is a co-op mode which has a different and quicker pace than the other competitive modes. For those that are familiar with horde modes in a game you will feel right at home in co-op. It is a control point progression against the AI. At first the AI may feel a little dumb and clunky and very easy, but as you get past that first and second points the AI seems to get a tad bit quicker and sharper on their attack. This slows the pace a bit and forces some communication amongst your team since ammo might be getting low. There are no waves to respawn so don't be as careless with your lives as in a competitive match, but once your mates win a point you will respawn. I didn't find myself playing co-op as much as the completive matches, but feel that it is ideal for trying new weapon loadouts and getting a feel for each of the various classes. 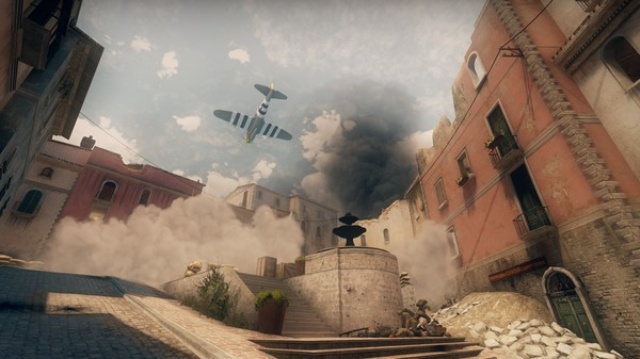 After each completed match you do get experience towards a leveling system. Playing well and completing objectives will give you more experience. Play like crap and sometimes you won't even see a point of experience. I haven't been able to nail down rhyme or reason to it but in the end you really don't get much for leveling anyway except skins for your character, although I still to this day cannot figure out why people love skins for their character. Developers shouldn't waste their time on personality and individuality of each character avatar, stick to the game and make it fun. In the end it is always nice to achieve a level and be rewarded in one way or another - to me it's just a waste.

The biggest gripe I have with the game is that it is dated. Yea, yea, graphics don't matter but in a sense they also do. Day of Infamy is based on the Source engine which is now 13 years old. Give me a more modern take of this game and it would rival the best in the FPS gig. Even with that said I still can't stop going back and wanting more. Day of Infamy is one of the most tactical and hardest FPS I have ever played. It reminds me of the Dark Souls series in the fact that at first it can be very difficult but once you start to learn the maps and how to utilize the classes to your benefit you can slowly start seeing your score and skill building. Honing that skill is where I am at now and I a loving every minute of it. I die less and am way smarter on my approach which benefits not only myself but the success of the team and a more enjoyable experience. For an entry price of $20 this game is an absolute steal and if you are in a lull with Call of Duty or Battlefield you will in no doubt fill the gap with Day of Infamy.