Little Nightmares is a surreal puzzle/platform game in which the game's atmosphere is more the focus than the puzzles. You control a young child in a bright yellow slicker known only as Six who awakens in a gray, dark, dank cell. There's no introductory cutscene, opening narrative, or scrolling text explanation - nothing to tell you who you are and why you're there. And it's not just the beginning that's devoid of a narrative, there aren't any of these narrative devices for the rest of the game. Instead, the environment, atmosphere, and actions around you work in concert with your imagination to tell the story. The rooms in wherever you're trapped rock slightly, and often the only source of light you have available comes from the small flickering flame of your lighter. Things, very odd things, scurry about in the darkness, some benign, but most interested in turning you into their next meal. I enjoyed the mystery surrounding the game, and playing with different evolving theories as new events unfolded or new areas were discovered. If that isn't your particular cup of tea, no worries, the game can be enjoyed as a series of puzzles that share a similar, creepy theme. 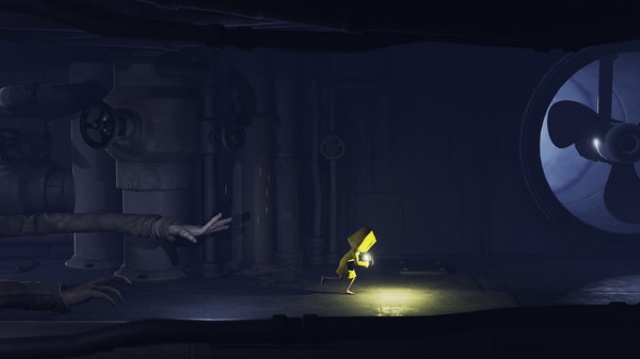 The game itself is progression-focused in that the goal of each puzzle is to escape the room that you're in and progress to the next one. Most of the puzzles involve finding a way to reach objects or places that are out of reach to a small child trapped in an out-sized world. I can't say that any of the puzzles are challenging - although the solutions aren't always obvious, you can work them our without too much time and trouble. More often than not, failures come from mistakes made during platform style moves. In addition to the standard sprint and jump buttons, there's a grasp button. This is used for picking up or dragging objects, but also for grabbing onto things to climb or ledge edges. To leap across gaps you'll often need to sprint, jump, and then grab, and it seemed to me that the grab is a bit too touchy in the game which resulted in a number of fatal falls. There's no death penalty in the game beyond being taken back to the beginning of the current room and a reset of the level, but I was occasionally annoyed by the need to replay part of a puzzle to return to fatal jump only to have it turn out to be fatal again for a second time. Those who prefer more puzzle and less platform may be frustrated by these sections of the game, as well as the occasional chase segment that the game throws in here and there. There will also be times when you'll need to be stealthy and avoid making noise, sticking to the shadows, and trying to create distractions to throw a potential pursuer off of your tail. I found these moments to be tenser than the chase sequences - perhaps the anticipation of being chased is more nerve-racking than an adrenaline-filled escape from a full pursuit. 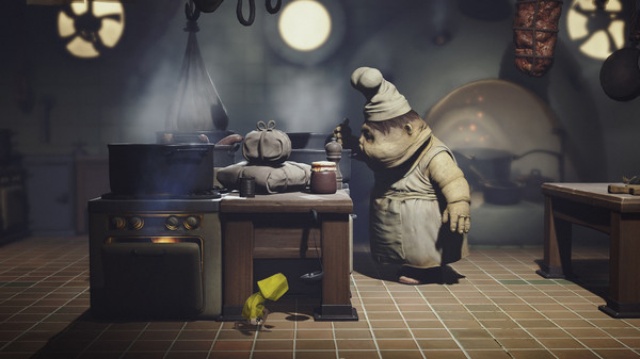 Most gamers will get through Little Nightmares in short order, about a half dozen hours, due both to the game's length and the fact that the puzzles can all be solved within a couple of tries. It's worth playing through even if you prefer more challenge in your games, though, as the game's world is so dark and imaginative that it makes for a unique experience. You'll remember scenes and moments from Little Nightmares long after you've finished the game.

Final Rating: 86% - These Little Nightmares will continue to haunt your thoughts long after you've finished playing the game.