Conflict: Desert Storm is a tactical shooter that is pretty light on the tactics.  It can't really be called an arcade-style shooter either, as it lacks the frantic action that usually marks that class of games.  What you have here is a mediocre effort that won't be of much interest to fans at either end of the realism spectrum. 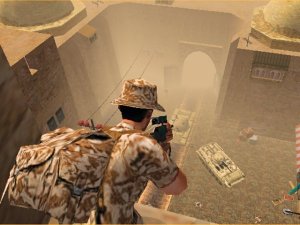 Conflict: Desert Storm takes you back to Iraq and Kuwait in August 1990 and puts you in charge of a squad of up to four special forces soldiers.  The game is a series of 15 missions which require you to accomplish a few objectives and then move to an extraction point.  These objectives include rescues, demolitions, and safe escorts.  You can fight for the British SAS or US Delta Force, but the only difference your choice makes is the color used on the soldiers' uniforms.  The game is played from a third person perspective, but a click of the right mouse button will provide you with a zoomed, first person view.  When you have one than one soldier in your squad, you can switch between them to take control of any of the squad members.

The first real problem with Conflict: Desert Storm is control.  The mouse is used to control your view and to aim your weapon, and both actions are frustrating, but for the exact opposite reason.  When you use the mouse to turn or change facing you spin like a mad dervish, which can be very disorienting.  Imagine turning a corner in a building to see someone rushing at you, and after shooting him dead realizing that you had spun over 180 degrees instead of 90 and just killed a squad mate.  It actually happened to me while playing the game.

Aiming suffers from the complete opposite problem as turning; the mouse movement is not sensitive enough.  Lining up shots is an exercise in frustration, especially given the AI-controlled enemies' penchant for standing out in the open, challenging you to hit them.  Imagine trying to hit a target on shore from the deck of a boat after you've knocked back a few beers and you'll get the idea. 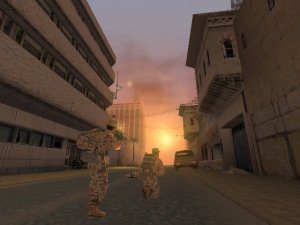 Control problems also extend to the game's interface, which features one of the clumsiest inventory systems ever to appear in a tactical action game.  Holding down the [Shift] key displays a list of inventory items and weapons directly on screen.  The list shows about seven items at a time, which is never enough to show you the whole array of weapons, medkits, and special items.  This forces you to constantly scroll through the list looking for the item that you need.  This is made even more frustrating by the fact that there is no organization to the list, and you'll have to dig between your guns and grenades just to locate a medkit.  To change firing modes for a weapon, you need to go through the inventory, find the weapon that you want, and keep clicking on it until it is in the desired mode - even if that weapon is already armed.  Why should it require so many steps just to use the grenade launcher attached to the rifle you're firing?  The final point of frustration is that the movement keys are mapped to the inventory list when it is open.  If you take fire while digging for a medkit and react by trying to move away, you'll only send your list madly scrolling while you take a few bullets.

The squad command interface is limited and awkward to use.  Orders are given from the main screen by pressing [Alt] and then entering a string of letters to give a command.  For example, to order a soldier to a new position, you must hit [Alt], followed by [Page Up] and [Page Down] to select the desired man, press [a] to give an advance order, click the mouse at the new location, use [q] and [e] to specify his facing, and then hit [a] to confirm the order.  Trying remembering all that under fire.  It's far better just to have your entire squad follow you around the whole mission.

The game curiously limits you to only two saves during a level.  This would normally be an issue as game designers should always let the player decide how much saving he/she would like to do during the game.  However, in this case saving mid-mission is not critical.  First of all the AI is not very smart, and likes to come right towards you and then stand at about 50 yards away.  It always does this out in the open, be it a road, city street, or open desert, completely ignoring any available cover.  Secondly, you never really die in the game.  If you run out of health, you only need to switch to another squad member and have him apply a medkit to his fallen comrade and he'll be good as new.

In The End, This Game Hath Been Rated: 54%.  It doesn't cut it as a tactical sim or an action shooter, leaving you with a strictly mediocre title.