Zombie Night Terror turns the tables on the standard zombie game. Instead of fighting to survive the zombie apocalypse you are the cause of it, and you'll need to ensure that no one escapes infection.

Your primary tools for turning people into zombies are your syringe filled with the contagion and the zombies that you create. Select a person for infection, give them a shot, and within seconds they will become a shambling undead nightmare. When that zombie puts the bite on another human, the human will become infected and will join your ever growing zombie horde. 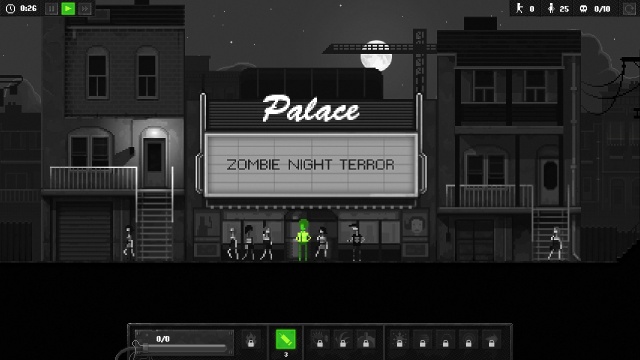 While that all sounds relatively simple, converting all of the people on a level to zombies isn't. First, the number of shots you'll have available is very limited, so you'll have to be selective when choosing your victims to ensure that your mindless zombies will be able to reach every person on the level. Also, some of the humans have armed themselves, so infecting a person across the room from someone holding a shotgun is not a good idea - your zombie apocalypse will quickly come to an end. Each level is essentially a puzzle in which you need to plan ahead and strategically select which humans to infect and when they should be infected.

There's more to completing a level than injecting people, though. You'll face obstacles that will prevent your horde from pushing forward, and zombies being what they are will only want to relentlessly push forward. When they hit a wall they'll simply hit it, and then do an about face and head in the other direction. They'll also blindly walk off balconies, drop into pits, and commit mindless zombie suicide in plenty of other ways if you're not careful.

You're not stuck helplessly watching your zombies die before your eyes, though. You'll be able to control certain aspects of the environment, marking a door for destruction by your zombies or toggling an arrow by a staircase to direct the zombies to take or bypass the stairs. You'll also be able to mutate individual zombies, turning them into roadblocks that will send your other zombies back in a different direction or into explosive bombs that can blow holes through walls or floors. These zombie mutations are introduced at a managed pace by the game, and when a new one is unlocked you'll get an opportunity to learn how to use it in a small tutorial level.

The presence of weapon-wielding humans, and an ever increasing response from the authorities, add another interesting dynamic to the game. There are times you'll find the roles reversed and your hunters will become the hunted. Things can turn a little tense when you're trying to keep your last remaining zombies safe from harm until then can unleashed on fresh meat again. 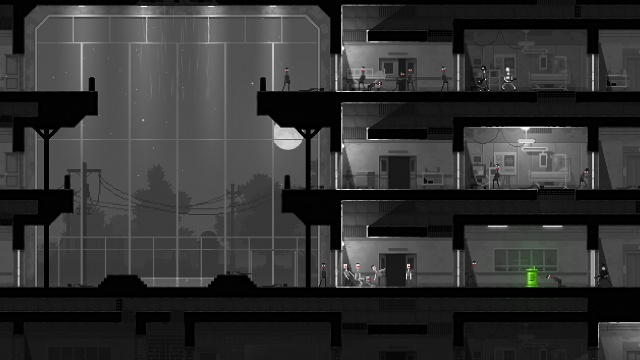 There are limits to everything, of course, if there weren't it wouldn't be a puzzle game. You'll have limited numbers of shots to give, limited mutations available, and a limited supply of humans to turn into zombies. Mutations are powered by a DNA resource, and if you don't have enough to trigger a required mutation you'll even have to sacrifice a few of your own zombies to harvest them for DNA. It's entirely possible to back yourself into a no-win situation, and the optional objectives can be deviously tricky to complete. I loved the puzzle aspect of the game and appreciated the challenge, but those who just want to unleash zombies without putting much thought into it may find the game to be frustrating. The game is kind enough to allow you to pause the action whenever you'd like, so those of you who prefer a little time to think before making a move are safe here.

I also enjoyed the game's style and other aesthetics. The primarily black and white pixelated graphics give the game a classic zombie B-movie feel, and help to pronounce the mindless lurching of my zombie hordes. There's also a horror film worthy story running through the game, one with a keen sense of humor, and the levels fit nicely into the narrative.

When I was given a demo of the game at E3 it was described to me as "Lemmings with zombies". While there is some truth to that comparison, I think that it sells the game short as there is more to Zombie Night Terror than that. It is one of those indie games that's rather unique and makes for an interesting change of pace from other games.