Being an 80's child I've had the opportunity experiencing decades of platform gaming. Slain: Back From Hell reminds me of so many of the early platform games I have played. Castlevania because of the Goth-like environments, Mega Man due to the choose your own path hub, and Metroid by gaining special weapons in varying environments. You can say it's a rehash of all those games, but to me it is a nod to the greats, instant nostalgia, with a heavy metal influence.

Slain doesn't mess around. With very little introduction you play Bathoryn who is a resurrected hero that has been summoned to defeat the god-like overlords and their minions who have taken over the world. The gameplay is super simple; Bathoryn is armed only with a giant steel sword, a couple of magical abilities, and crazy long metal band hair (which I am super jealous of). Along with your wits you will encounter several different enemies, jumping puzzles, hidden rooms, and traps. You will also die...a lot! Some platformers you can just plow through and essentially speed run them while skipping enemies - Slain is not one of those games. Encounters usually entail a lot of enemies and one slight mistake can be instant death or severely detrimental for the remainder of the level until the next checkpoint. This can sometimes be very frustrating because you can get so close to the end and make one mistake that will send you back to the start. However, when you finally get to that next checkpoint it's instantly gratifying. Never once did I feel like I had to stop playing and give it a rest. Slain is difficult, but not to the point of needing to purchase a new controller after destroying it in frustration.

While controls are super simple Bathoryn actually has quite the arsenal. Over time you will get the abilities of fire and ice for your weapon each with their own unique move set and charged attack. They do seem similar, but the timing is very different. You also have a type of magic missile which can also be a charged attack and a magic bomb that emits energy in all directions. Each enemy has a weakness that can be exploited by either a well-timed counter block, charged weapon attack, or magic. The same goes with the bosses. While graphically well-designed and unique, they are also fairly lackluster in their abilities and generally only have two phases. Learn the exploits and the counter moves and eventually you and Bathoryn will be slicing through them like butter. 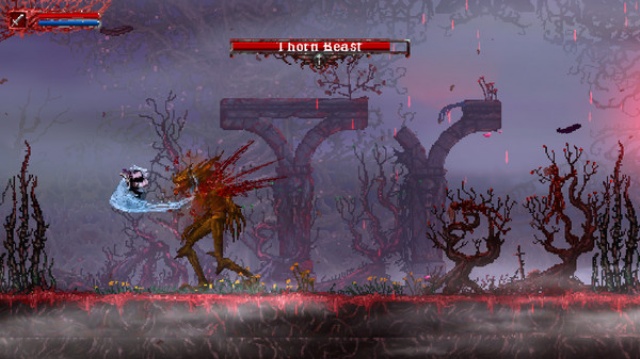 Not only are you mowing down enemies, but you'll also be pitted against numerous jumping puzzles and traps. More than 90 percent of my deaths were due to miscalculating a jump or getting hit into a trap by an enemy. Not that they are difficult to avoid, it's more so because there are so many enemies in the way that should be disposed of before moving forward. The levels are littered with these obstacles and some are triggered by switches that need to be pressed in order to make any progress. Overall, the level design is very linear aside from a few "hidden" rooms that are actually pretty obvious. None of the levels are super memorable, but the graphic design and the heavy metal soundtrack are superb. The 16-bit graphics are so smooth and there is so much detail it is worth it sometimes to just sit back and admire the art. Before each level you are given a summarization of what to expect when in actuality it's like a chapter in a book which is beautifully brought to life. The transition gives the gamer a real sense of immersion.

For me nostalgia does come with the side effect of pain and suffering. Those early platformers could be very unforgiving and the enemies and bosses repetitive. Slain seems to have adopted those side effects. In an attempt to spice things up each level is essentially just a fresh coat of paint, but ultimately the same pain and suffering. I don't mind a challenge, but it does get very repetitive and dull no matter how pretty the paint job. Thankfully the game isn't very long so the pain and suffering is short-lived, however, for me it's not easily forgotten.