It's going to be difficult for me to assign a rating to Overwatch. On the one hand, it features a diverse cast of well-designed characters battling it out on expertly crafted maps. On the other, there's not a whole lot to the game - there are only four team-based, objective-focused modes (and those four modes are really just variations on two game styles), there's no single player content outside of a couple of training modes, and it's completely devoid of story and narrative. In short, what it does it does well, but it doesn't do a whole lot.

If you've been following the game before its release, then you've probably seen the animated shorts that have been giving gamers a glimpse into the world of Overwatch. The videos are really well-done and feature some impressive animation, so they are worth watching even if you ultimately decide that the game isn't for you. They are more individual vignettes than a continuous narrative, though, and from them you can gather that Overwatch was once a team of world-defending super heroes that was disbanded by a public outcry from the very population that they were working to protect. A new threat has arisen, though, and the team is reassembling on its own to meet the threat. On a side note, I have to say that I couldn't help but think of The Incredibles while watching the shorts. 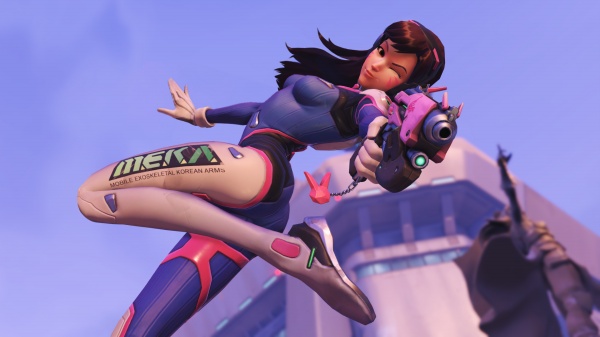 The reason that I mention these videos is not simply because they are enjoyable to watch, but because they are all available outside the game. The game itself has no story to it, which seems a little odd given Blizzard's track record of elaborate game narratives backed by high quality cutscenes and voice acting. I'm really not sure how the world painted by the video shorts has evolved into the heroes fighting each other for control zones or to escort a car from one side of a small neighborhood to the other. It's not that I feel that a compelling story is necessary to enjoy some multiplayer action, but it feels odd that a Blizzard release is so devoid of story.

The lack of story goes hand-in-hand with the lack of single player content in the game. If that's what you're primarily interested in when you play shooters, then you should pass on Overwatch because you won't find any of it here. There's a short single-player tutorial that gives you the basics of the game's controls, which will be intuitive to anyone who's played a shooter before anyway, and a practice area where you can get a feel for each hero's abilities against some target robots. You can also play in a match against an AI team, but I'm not sure why you would want to spend time in this mode rather than simply jumping into the multiplayer action.

That being said, the multiplayer action in the game is pretty good, and it all starts with the game's roster of heroes. There are twenty-one heroes available in the game, all of which are available for play from your very first match. The heroes are divided into four classes - Offense, Defense, Tank, and Support. There are no restrictions on hero selection on the match start screen, so all players on a team are free to select the same hero if they want. It's a better idea to have a balanced team, though, and the game will inform you if you are going into battle with a team lacking in a particular class or skill type. And if you're finding that your team's mix of heroes isn't working for you, you can change to a different hero each time you spawn into the game - or after a jaunt back to the spawn zone if you can't manage to die fast enough. 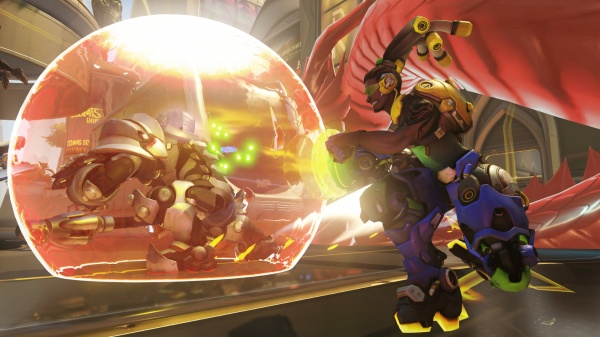 The character roster is impressive from both a design and a balance perspective. Each character has a distinct and interesting personality which easily comes out through their emotes, taunts, phrases, and animations despite the lack of any backstory content in the game. Again, learning anything else about the characters has to be done outside the game, in this case by reading the character bios on the game's website. Each character has a unique set of abilities that includes a slow-charging ultimate ability, all of which feel distinct from one another. Playing as one tank character and then switching to another doesn't feel like the same thing with a different skin - you'll have to adjust your tactics and playstyle to suit each character. The different abilities of the characters can be combined in many different ways during a match, and I have to say that one of the enjoyable aspects of the game is seeing the clever ways that players come up with to orchestrate the talents of the various characters; I often learned or discovered a new trick or tactic during a match.

Overwatch keeps things balanced by dispensing with character levels, loadouts, upgrades, and the like. Each character has the same weapons and abilities whether it's your first time with the hero or your hundredth match. This keeps the matches balanced and welcoming to newcomers, but on the other hand there's no reward for your progression in terms of new gear or abilities. The game does keep extensive stats on your play, both on an overall and a per hero level, and that combined with game achievements will give you a sense of accomplishment and progress in the game. Your match performance will contribute to your player level, but there's not much tied to your level beyond bragging rights and the loot box that you're rewarded with each new level reached. Loot boxes contain a random assortment of hero customization items, emotes, catch phrases, and victory poses to name a few. New skins are a pretty rare drop, but you can also use game currency to unlock them. The game does a poor job of explaining this, but you can only use real world money to buy extra loot boxes and not in-game currency. The currency comes from the loot boxes - rather than giving you duplicate items, the game will give you currency instead. This is a slow process, though, and it will take you quite some time to earn the currency that you'll need to unlock just a couple of alternative skins for the characters that you play the most.

The game features four modes at launch, but they are all combinations of the same two activities - capturing zones and escorting a car from one point on the map to another. Zone capture/defense doesn't really require much explanation - stay in the zone and kill any enemies that try to enter or vice versa. If your team is escorting the car, then you need to have players next to the car for it to move forward otherwise it will come to a stop. Conversely, the attacking team is not attacking the car, but rather trying to keep it from moving forward. If it stays stationary for a long enough period of time, then the attacking team wins and the escorting team loses. The four match types each have three maps assigned to them for a total of twelve, but this assignment seems a bit arbitrary as I'm sure the maps are suited to some of the other modes in the game as well. On the plus side there's room for a number of tactical approaches to playing the game modes, but conversely you're essentially getting two game modes for your money. 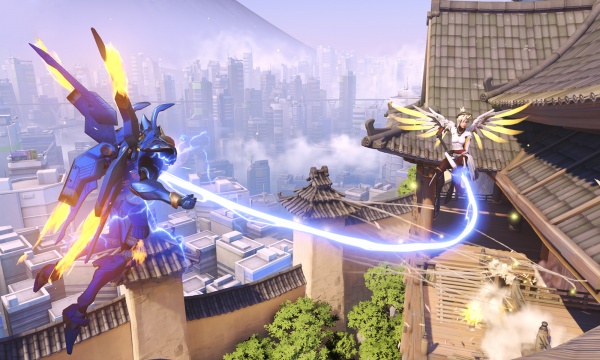 If Overwatch was a free-to-play game or was sold at the $19.99 level or below, then it would be very easy to recommend. The game is enjoyable, the maps and characters are expertly designed, and the controls are tight and responsive, even on PCs that are not at the bleeding edge of technology. However, it's currently priced at the same level as a top-tier, AAA title, even though it delivers a fraction of the content that you'd expect from a game at that price level (Editor's Note: at the time of this writing, $59.99 on PC and consoles, with a $40 version available on PC that comes with five fewer skins and without any cross-game digital bonuses). There have been indications that the game will see future updates in the form of new heroes and game modes and that these update will be added to the game at no charge, but it's hard to recommend paying full price for the game until those updates are actually delivered. As it stands, it is easy to see some gamers enjoying the heck out of the game for a few hours and then growing tired of it due to the decided lack of variety and content in the game. You really want quality and quantity out of the games for which you pay top dollar, and while Overwatch delivers on the first point it is sorely lacking in the latter.