As of this review I can't believe it has been nearly ten years since the release of Gears of War on Xbox 360. Back in 2006 I remember Gears being one of the best looking games available and becoming one of the most successful cover combat game series on Xbox 360. The series in my opinion did lose its edge in later games, but there still were some memorable moments and the series of course had a dedicated following. Enough of a following to remaster Gears of War for Windows 10, or is the remaster just a quick cash grab?

For those that aren't familiar with the series, Gears of War is a third-person shooter on an Earth-like planet overrun by aliens called Locust that emerge from the depths of the planet. The focus is on a group of soldiers called the Delta Squad that are a part of the resistance group called the Coalition of Ordered Governments and its leader is Marcus Fenix. The primary objective of the Delta Squad is to discover the source of the Locusts in the planet and deliver a well-placed bomb to put them away for good. The plot is clear and simple, but the character personalities and overall delivery is what really shines through. The Delta Squad is made up of a group of five guys that look like they only eat steroids for their meals. They are literally walking tanks with loud mouths who sometimes bicker like little girls, but overall they are total badasses. In each chapter you learn a little about each character's background prior to the Locust outbreak, and you also see a bromance and a lot of trust develop between them which is fairly enjoyable and gets you emotionally invested. The first few encounters with the Locusts is fairly entertaining, but you start to notice that it's pretty much the same every time; a wave of enemies that sometimes you take head on, flank, or split up into two groups and meet up in the end. In between each battle there is some additional lore which is presented in a couple of different ways, one better than the other. One way is through the cutscenes which ten years ago looked great but now in the remake look even better and are very enjoyable to watch - especially when you encounter a boss. These cutscenes feel like movie quality and progress the story and improve overall emersion. The other less desirable story progression method is delivered in-game and for some reason brings your squad to a screeching halt - not sure why the developers thought it would be a great idea to not allow your character to continue through the environment and make them walk while talking amongst themselves or with headquarters over their coms. I honestly wished they would have removed this in the remake because it really slows the fast-paced run and gun feel the series has, and is essentially a mood killer. It's basically like stopping a roller coaster ride in mid drop; no one wants to be cut short on their experience. 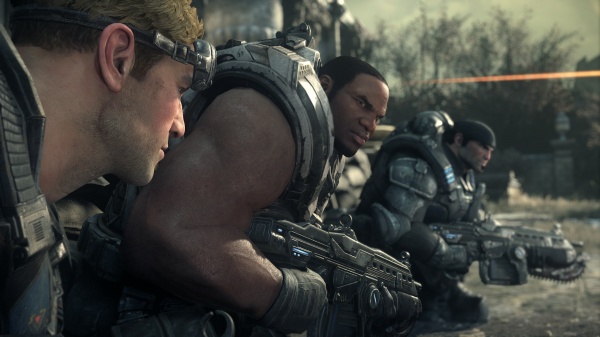 One thing that Gears always executed well was the cover system because it brought a real sense of scale, weight, and combat. The downside is that they game relies on it too much. Even on normal difficulty you can easily die from flanking enemy or direct shots if you do not play into the cover system. In some parts of the game you can take the run and gun approach, but will more likely find yourself diving and transitioning into cover whenever possible. On the 360 the cover system felt a little clunky; slow and heavy yet executed better than anyone before them, and it seemed to fit with the freakishly oversized tank of our protagonist Marcus. I remember feeling like I had to really pause and press the buttons on my controller in order for the game to register my cover actions which added to the clunkiness and frustration. In the remake this has less of an impact because of its upgraded graphics, and improved frame rate and response time. The moveset transition into and out of cover do not seem to hinder gameplay, but enhance it and it feels way more fluid. This still doesn't change the fact you basically have to utilize cover in almost every situation.

Another thing that Gears introduced to third-person shooter was the roadie run. The intent, I think, was more immersion with the character. When entering the roadie run the camera would shift more behind your character and you'd enter a crouched sprint to effectively become smaller and harder to hit. If you listen carefully you can also hear the character breathing heavier and the camera effect makes them feel faster. The worst part is you can't even shoot while in the roadie run, effectively making you vulnerable. I never liked this feature on the 360 and still don't like it in the remake. I understand what the developer was trying to do, but the camera view is horrible and I feel like you can't see where you are going and it is very difficult to adjust while in the roadie run. Similar to the cover system, on the 360 the transition in and out of the roadie run was a bit slow, but in the remake it feels a bit easier to transition in and out of the roadie run, though that doesn't change my opinion of how useless it feels to me. Some may have arguments for its purpose in multiplayer, though I always felt crunching yourself into a more solid target makes you an easier target for the enemy especially since you can't fire back. 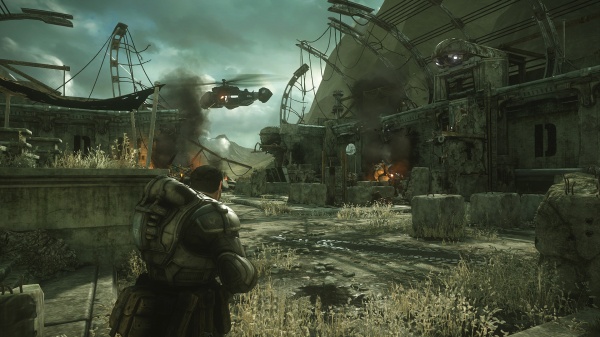 The biggest draw of the series as with any shooter nowadays is the multiplayer. Over the course of the series there have been many great maps and categories. In the Ultimate edition not only are the graphics improved and the frame rate increased, but over 19 multiplayer maps have been added, including the most popular of game categories across the series such as Team Deathmatch, King of the Hill, Blitz, and 2v2. There are plenty of modes to suit your playstyle though early on in the Windows release the experience in finding a group has been very unpredictable. I had spent roughly an hour in the forums verifying I wasn't the only one experiencing difficulties and I wasn't. Hopefully over time improvements will be made in the matchmaking and the community will not bail and remain strong. When I did eventually catch a multiplayer match I did feel like I had been out of touch for too long so I found myself getting dominated. If you haven't played the series in a while, or are experiencing it for the first time, there will be a heavy learning curve in the multiplayer. For some reason it just feels like the physics of the weapons and speed of the game is completely different than in the campaign, but experiment and find the weapons and game category that fit your style and you will slowly creep up in the ranks. Remember, roadie run is not your friend in multiplayer, but maybe I am just not doing it right. The campaign also has a co-op experience, however I didn't have much luck joining or even getting anyone to join my game. When I did get connected with someone the session was severely laggy and unplayable. Again, a little research showed I wasn't the only one having issues. Similarly to the multiplayer, I hope it just takes some tweaks in the matchmaking to make it better over time.

Even though Gears of War Ultimate may have been spruced up with improved graphics and frame rate I don't think there was enough draw to the PC release. It felt like a marketing stunt to entice people to make the jump to Windows 10. The timing of the release didn't help either; the Xbox One release occurred months prior and if you were an early adopter you even were given codes to download the remaining game series to use with the 360 backwards compatibility feature, which, yes, I had done myself. Keep in mind the extra games were a time sensitive perk, though, and in comparison the Windows 10 release came with no extra games. This makes sense because not all of the Gear's games were released on PC, but it still would have been a very welcomed surprise and of course more bang for your buck. Having played on both PC and Xbox One, the PC release is by far graphically better and feels smoother, but I think you will have a better experience with the already established Xbox One community for co-op and multiplayer. The Xbox One release satisfied the nostalgia hungry gamers while perfectly introducing a large number of newcomers to the series in a perfect package. The Windows 10 release feels out of place in comparison, and with no real intended audience.

Final Rating: 75% - It feels out of place compared to the Xbox One release, but it looks and feels amazing.