Interplanetary is a game of artillery or bombardment on a stellar scale. A system of planets inhabited by sentient beings with a penchant for designing powerful weapons but with a complete lack of space-faring technology has somehow reached the point in diplomatic relations in which the only thing acceptable to each planet is the complete and utter annihilation of every one of its neighbors. You are given control of one of those worlds, directing the deployment of weapons systems and defense networks on the planet's surface, and launching deadly projectiles at your enemies while trying to survive the bombardment raining down on your world. 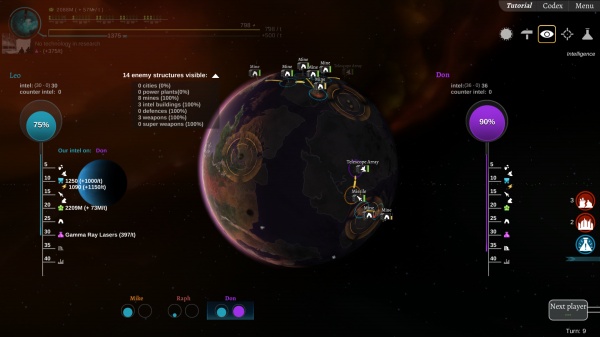 The key to each planet is its cities. Lose them all to attacks and you're out of the game. Protect them and allow them to grow, and you'll generate the technology and resources that you'll need to smite your foes. You don't have any control over where the cities are placed on your planet, but you'll be able to determine where you want to place your limited defenses to protect them and where to deploy the weapons you'll use to attack the other planets.

The defenses and weapons available to you will depend on how you decide to invest your scientific resources. A surprisingly large tech tree gives you plenty of options to pursue a defensive, offensive, or middle of the road approach to your war.

As in all artillery games gravity rules here, but instead of trying to clear a wall or a mountain you'll need to guide your projectiles past the gravitational wells of a network of orbiting planets and the star that sits at its center. The game is primarily turn-based but resolves all weapons fire simultaneously in real-time. This means that when you are plotting your weapons trajectories you are doing so in a static snapshot of the planetary system and must anticipate where your target will be at the time your warhead will strike it. Unfortunately this approach to weapons targeting is fundamentally flawed. 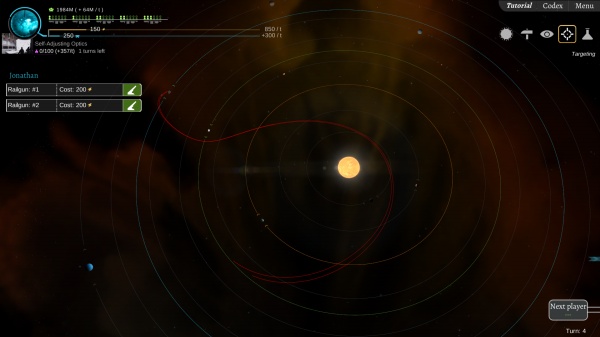 The trajectory lines that you draw before entering the fire phase are essentially meaningless. They'll curl and squiggle as you move them past planetary objects to reflect the effect of gravity, but as soon as things begin to move those lines will no longer be valid. You'll be able to pound your planetary neighbor into dust if you hold your fire until your planet passes by it, but trying to hit an inner planet from an outer orbit or vice versa is essentially a crap shoot. The game is a long exercise in researching new technologies, deploying systems onto the planetary surface, and then watching your missiles detonating in empty space or flying off into the interstellar void. Making matters worse is that the AI begins to get more and more accurate as the game wears on. It's as if it is missing on purpose at first to give you chance to survive for several turns, but then the trajectory algorithms begin to make use of inside information to start raining missiles down on your cities. And meanwhile you're still trying to figure out where your missile will end up while trying to ignore all of the gravitational curves that are essentially giving you false information.

There are some good ideas at the core of Interplanetary, and you're initial time with the game will be enjoyable. However, the weapons phase of the game is a poorly designed exercise in frustration that will have you soon giving up on the game.