If you cut your gaming teeth on the cardboard chit and hexagon boxed war games from companies such as Avalon Hill, you probably at one point or another played the game Third Reich.  Its grand scale and gameplay allowed players to try out what-if scenarios of World War II, from the obvious to the more far-fetched.  What if Germany mounted an invasion of England?  What if the Axis had invaded Turkey?  The game lets players try out new strategies or try to execute historical ones.  After playing Strategic Command, it is very probable that the game's designers were inspired by Third Reich,, as the game shares a lot of similarities with its cardboard predecessor. 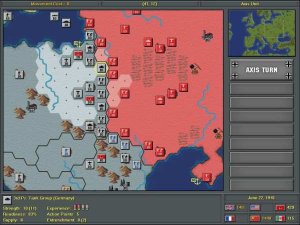 Strategic Command is a turn-based war game that takes place on a 50 miles per hex scale map of Europe that stretches from Spain and Ireland in the west to the Urals in the east.  From north to south, the map includes the southern reaches of Scandinavia and the northern coast of Africa.  In addition to major terrain features, the map also contains major cities, ports, and resource sites.  Control of the cities and resources is critical to victory, first of all because taking a country's capital is a necessary step to defeating it.  Each city, port, and resource site owned contributes to the controlling nation's economy in the form of Military Production Points (MPPs).

MPPs are the basic currency of the game and can be spent to build new units, reinforce existing ones, or to conduct research that will yield combat bonuses.  At the end of each turn, MPPs are awarded for controlled cities and resource centers, and bonus MPPs are given for any countries conquered during the turn.  The new MPPs are placed in a pool with any left over from the turn and are available for spending on the next turn.

The play mechanics are simple, especially for anyone who has played traditional war games in the past.  Each unit - land, sea, or air - is rated on several factors such as attack, defense, and mobility.  During a turn, you can move any unit a distance determined by the unit type and terrain crossed, attack adjacent enemy units, or chose to reinforce damaged units.  When attacking an enemy unit, several factors are take into consideration when determining the results - attack and defense ratings, experience, proximity to a headquarters units, and entrenchment, to name a few.  Damage takes the form of a reduction in a unit's strength points and should the number of points be reduced to zero, the unit is eliminated.

Air units do not need to be adjacent to an enemy unit to attack.  Instead, they can attack any unit within a set radius of their base.  Any enemy air units in range of the attack will scramble automatically and defend against the air strike.  Unfortunately this automatic interception also applies to your own air units.  You are not given the option to select your intercept missions.  This can cause air units you'd rather save for strikes the next turn to take damage flying intercept missions.  It can also waste your intercept missions on inconsequential attacks while leaving you helpless to defend against more critical strikes later in the turn.  Of course you can turn this to your advantage when attacking by saving your most important air strikes for last so that the defender runs out of intercepting air missions before your critical strike takes place.

In addition to ship to ship sea battles, naval units can also strike by performing shore bombardment of ground forces on coastal hexes.  Carrier units can also perform air strikes further inland.  The game also includes submarine units, but their use is limited and not very effective.  When at sea, their position is not hidden from the enemy and they do not get any special advantage for striking first.  Instead, their special ability is to randomly avoid attacks by diving to avoid taking damage.  Considering the large role played by the German U-Boat forces in World War II, it is surprising that the game has left them as ineffective minor players.

The game also features a diplomatic component that allows you to declare war on neutral countries, bringing them into the war on the other side and giving you the opportunity to gain more MPPs through conquest.  The major combatants of the war can be set to join the conflict at their historical times of entry, or to enter at random.  When set to enter at random, there is a percentage chance that the country will enter the war at each turn, with the chance increasing when the game reaches the country's historical time of entry.  There is no mechanism, though, to use diplomatic means to try and forestall or hasten a country's entry into the war, and countries will always join the side they did historically.