Sudden Strike II, like its predecessor, is a real-time strategy game set in World War II.  It is not, however, a wargame that takes place in real-time.  This may at first glance appear to be not much of a distinction, but if you're looking for a latter day Close Combat you won't find it here.  Sure, you get hundreds of World War II era units from all of the major combatants, but they are inserted into a very average RTS, a game that both war and strategy gamers will find frustrating and unsatisfying.

I hesitate to use clichés in reviews, but there is one that is so appropriate in this case that I'll have to make an exception: Sudden Strike II is a case of "missing the forest for the trees."  The designers did a lot research into the equipment available during the war, providing unitsfor armor not typically seen  in games such as the Sturmtiger, T-26, and the chi-ke.  The game's box claims that there are more than 150 unit types available, although very curiously they are not listed in the manual or within the game.  Each unit in the game is modeled taking into account factors such as range, armor, speed, and vision, to name a few.  In addition, infantry comes in many forms: riflemen, machine gunners, officers, and bazooka gunners to name a few.  Each infantry unit is an individual soldier, with his own level of experience, ammunition, morale, and health.  However, in spending so much time caught up in unit details, the designers missed out on bigger picture game aspects such as unit command and control, AI, and even historical accuracy. 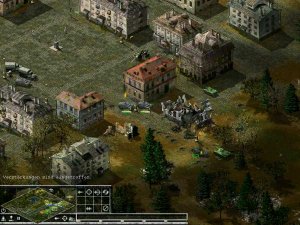 The issues with Sudden Strike II begin at the interface level.  You can have literally hundreds of units in a scenario running through jungles, forests, and urban environments, and keeping track of them all can be quite an exercise.  The units are small, quite often get lost in the scenery, and are often impossible to distinguish from one another by sight.  Even if you select a large number of units, you are not given any information on the units selected and still must select an individual soldier to find out his specialty and status.  The game allows you to select all of the units currently visible that are of the same type with a double-click, but this does not help much.  There are not enough group keys available for you to create balanced squads or even large groups for each unit type.  Not that this would help much anyway as you can never really tell what you are up against since the enemy's units are as tiny as yours.  So, you are stuck moving around huge blocks of units and primarily performing frontal assaults on the enemy.  A game of this scale really needs some sort of command and organization scheme - there's a reason that generals don't micromanage the movements of their units in the field.

Unfortunately adopting human wave tactics is not enough to free you from micromanagement.  The pathfinding is so bad, that your human wave will be spread all over the map if you did not monitor its progress nearly every step of the way.  There are always units that decide that the best way to get from Point A to Point B is to visit Points C, D, and E on the way, even though the route might take them across two bridges and through an enemy camp on the way.  Units also have a very difficult time navigating gaps, and stuck units and traffic jams are common occurrences.

For all the game designers' research and modeling of units, it seems that they neglected to balance infantry versus armor combat.  Infantry has a pretty easy time with armor, tearing apart hard targets that happen upon a squad of soldiers.  In one case, I saw a group of three armored halftracks full of soldiers reduced to a smoldering pile of metal by a group of about ten infantry - and they weren't even armed with bazookas.  This brings us back to the human wave tactic.  You might as well group all of your infantry together and methodically move them across the map, overwhelming anything that the enemy can put together.