Mayan Death Robots is a reality TV show. It just happens to be an alien one. From 600 years ago. Set on Earth. The robots that these aliens send to Southern Mexico to do battle for their entertainment are viewed as gods by the local Mayans, and the natives decide to take sides...

Mayan Death Robots is essentially an artillery game, but it throws a few curves into the standard formula. You start out by picking your robot, each of which has their own unique pair of artillery shell types. The robots are inspired by Mayan gods, bear their names, and have suitably themed attacks, such as the monkey god's banana bomb. They're basically mobile artillery pieces, but their unique looks and attacks give them more personality than you get from your typical howitzer. 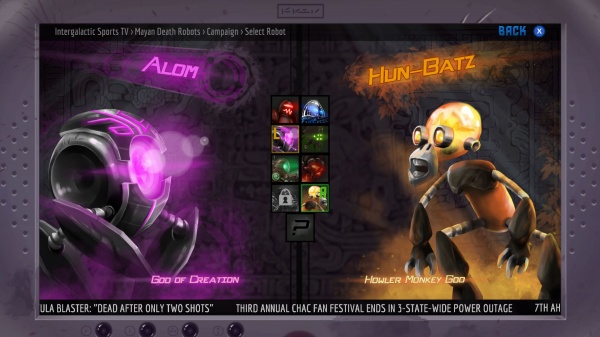 The battles take place on 2D maps with each robot on opposite sides of the screen. The goal is not to destroy the other robot, but to destroy its small treasure box-like core that begins each battle tucked in an underground cave. In fact, taking out a robot foe merely means it misses a round of shots before a duplicate replacement is brought to the battle. The game consists of rounds, with the first part of each round essentially pausing the battle as each robot selects its next type of shell or special move and taking aim, and the second part consisting of the selected actions taking place in real-time.

In addition to selecting between your robot's two different weapon types, you can also choose to add additional pieces of terrain to the battlefield, to have your robot jump to a new location on screen, or, once every several rounds, choose the a randomly selected weapon that's not a part of your usual arsenal. The new terrain pieces are Tetris-shaped blocks of rock that you can use to shore up the protection around your core or to build shell-blocking barriers. This is more of a tactical option than a strategic one because each time you go to the well you're given fewer pieces to work with.

The jump move lets you reposition your robot with a hop aimed in the same way you aim your weapon, and you can even make the leap to your opponent's side of the battlefield. While jumping can improve your firing position, there are a couple of risks involved. Since the action part of each round plays out in real-time, the landing spot you were aiming for might disappear in a cloud of rock and shrapnel before you land. If there's nothing beneath you when you come down, you'll fall through the bottom of the screen, lose your robot, and miss out on the next round. And jumping to the other side of the screen will incur the wrath of the other robot's Mayan followers, who will attack your robot mercilessly.

The game features a small handful of maps, but it likes to mix things up on you. You may find that snow has made things slippery and unleashed a gaggle of angry snowmen, or that the Mayans have brought in catapults to launch rocks at each other, or that a boss creature decides to rudely attack in the middle of your private battle. In this last case, the game switches things up a bit and both robots must work together to defeat the boss, with the robot that does the most damage gaining a bonus like an increase in the radius of its weapon explosions. It's one of those "probably sounded better on paper" things, because the battlefield gets so torn apart in the boss battle that it doesn't leave much left for the robots once the boss is dispatched. 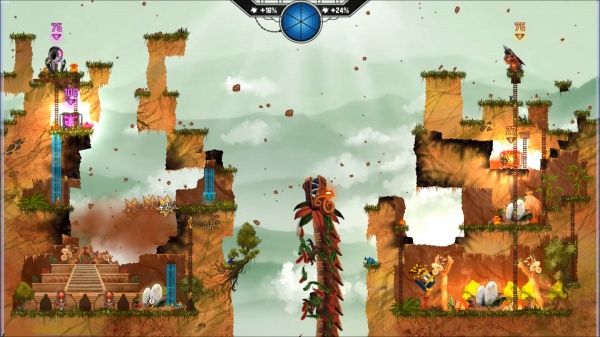 Mayan Death Robots is for the most part enjoyable, but there are a few issues which drag down its fun factor. First and foremost of these is the controls. The game can be played with a keyboard or controller, but inexplicably not with the mouse, and in either case trying to set your weapon trajectory can be frustrating. Fine control is difficult, and the line used to set the arc and power of the shot has a tendency to make little jumps that take it passed your desired spot. There were too many times when I was bouncing back and forth across the trajectory that I wanted until the timer ran out and my shot just went off while I was still fiddling with the aim. In general the controls need to be more responsive and give you a finer degree of control, but it's while aiming your shots that it really becomes a problem. The game also seems to run into issues now and again. During one game the framerate started stuttering when there were a lot of Mayans running around the screen and I had to restart, and in another the game ran without any sound. These issues were fixed with exits and restarts, but you should be aware that a little patience will be required with the game.

The game can be played in a single player campaign mode or in two-player local play. In the latter, both players will share the keyboard, or one can use a controller and the other a keyboard, and play on the same PC. There's no LAN or online play support. The campaign is a series of battles across the available maps with some of those variations that I noted earlier. You can pick any robot that you've unlocked for any battle and the computer picks its robot at random each time, so the campaign comes across more as a simple sequence of battles than a campaign.

Mayan Death Robots certainly has its fun moments and there are some good ideas here that make it more than just another artillery game, but the execution is not quite there. Improved controls and a little more meat to the game would go a long way towards making the game more than the niche indie distraction that it is.