Duke Nukem.  The name evokes images of a buff action hero, spouting one-liners as he blasts apart mutants and saves scantily-clad women.  The all-man action hero now returns for another adventure in Duke Nukem: Manhattan Project.  This incarnation is a bit of a mix of the old and the new.  Most recent Duke games have been 3D shooters, but the series has its origin in a side-scroller game.  Manhattan Project returns to the original side-scrolling action, but does so with 3D graphics. 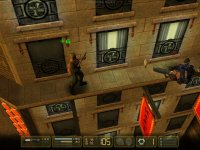 The 3D graphics give the game a good look that is a far cry over typical side-scrollers.  The characters are modeled in 3D, and even cast shadows as they pass light sources.  The character animations are fluid, and the environments have a nice, albeit slightly cartoony, look to them.  However, you are definitely locked into the 2D world of a side-scroller, and during the first part of the game it will take a little getting used to the fact that you can not go exploring the environment, but must instead move either back or forth.  To its credit, the game does give the illusion of greater freedom at points, as the ledges or pathways make short bends towards the player before returning to a left-right orientation.  Don't get me wrong, the side-scrolling aspect is not necessarily a bad thing.  It's just that in a world where players take a certain degree of freedom of movement in their games for granted, it should be noted so that you know what you are getting into.

That being said, what about the gameplay itself?  In Manhattan Project, Duke once again finds himself up against hordes of mutants, this time in New York.  A power-hungry villain, Mech Morphix, is using a radioactive slime to mutate creatures to help him take over the city.  As if this wasn't enough, Morphix has also captured the city's babe population and strapped them to radioactive G..L.O.P.P. bombs.  Morphix didn't count on Duke in his plans, and Duke is out to make him pay for the trouble he has caused.  Your goal in the game is to use Duke to shoot just about anything that moves, rescue the trapped babes, and defeat Morphix's minions and end the plans of the mad master. 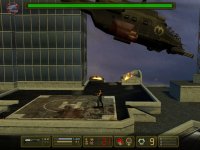 The game is divided into eight locations, with three levels per location.  These locations take Duke down into subways, along ledges on skyscrapers, and eventually into space.  Each of the eight locations ends with a boss creature - each of which has a vulnerable point for Duke to exploit.  The boss battles often have several phases since most evil heavies have a way of coming back just when you thought that they were down for the count.  When moving through the levels, Duke must kill just about everything that moves, rescue a babe, and secure the keycards necessary to move ahead to the next level.  In addition to the aforementioned bosses and the ubiquitous pig cops, Duke will face a horde of mutated rats, alligators, insects, and other creatures - for a total of 25 different foes.

To accomplish his mission, Duke has an arsenal of weapons at his disposal (or at least at his disposal once he finds them).  In addition to the venerable pistols and shotguns, Duke can acquire a total of nine different weapons, including a rocket launcher, a pulse canon that can be charged up to fire in multiple directions, and a G.L.O.P.P. ray.  This latter weapon returns mutants to their original state, allowing Duke to step on them and squish them.  As in most games, you'll find that you'll use a couple of the weapons most of the time, with the basic assault rifle a good choice for your basic mutant killer.  The downside to the weapons is that most of them are constrained to fire in the four cardinal directions, forcing you to align yourself with your enemies before opening fire.  Also, there is a pipe bomb weapon that is a lot of fun, but seems to exhibit some quirks that make it impractical to use as a main weapon.  It tends to bounce around when tossed making placement difficult, and it is hard to consistently trigger the bombs instead of tossing another one by accident.