Usually reviews should avoid comparisons to other games, but in the case of Prince of Qin it is unavoidable; the game's packaging makes not one, but two references to Diablo on the front box cover.  The game does owe a lot to Diablo, with similar play mechanics and action/RPG elements, but falls short of recreating the excitement of its source of inspiration. 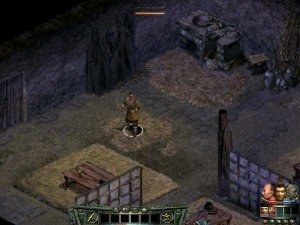 Prince of Qin takes place over 2,000 years ago in China during the time of the Qin Dynasty.  You assume the role of Fu Su, the crown prince of Qin.  Historically, Fu Su committed suicide when ordered to do so by his father, the emperor.  However, the order did not come from his father, but was a forged document created by his enemies.  In Prince of Qin's alternate history, Fu Su recognizes that the document is a forgery and sets off to find the source of the document and claim his birthright.

The gameplay is straight out of Diablo - movement and combat take place in real-time, and you control Fu Su by using the mouse to select NPCs to converse with and enemies to attack.  Prince of Qin does add something new in the capability to pause the action at any time.  When the game is paused, you can switch weapons, eat health restoring items, and the like without worrying about being hacked to death by enemies in the mean time.  Success in combat awards experience, and when you reach the next level you can upgrade your attribute's and skills.  If you played Diablo II, then you'll recognize Prince of Qin's skill system since the concepts are identical.  In Prince of Qin, though, the skill system is not as varied or as interesting as in Diablo II.

The skill system is typical of most everything in Prince of Qin - inspired by Diablo II but not as interesting.  The Diablo games feature a lot of combat versus varied and imaginative enemies.  In Prince of Qin, however, battles are far fewer and far between, and the enemies are similar and pretty bland.  In fact, they seem to fall into three categories:  melee, ranged, and jumping melee.  This last group includes wolves, ogres, tigers, and a few assorted other critters (wolves and ogres look identical, only one is labeled 'wolf' and the other 'ogre') which jump over your character in an attempt to attack from behind.  Unfortunately, Prince of Qin uses so few frames of animation for all of its creatures that this effect comes across as a comical game of leapfrog.  The only real difference between different enemies seems to be the number of hit points they have and the degree of damage that they can inflict.  You can use the same basic strategy of frontal melee assault, occasionally pausing the game to restore your health when needed, against all of the enemies that you'll face in the game.

The side quests in the game do not fare much better than the combat.  There seems to be an endless supply of fetch quests, often requiring that you to buy an item for somebody.  These items are always quite overpriced, so you'll be stuck with looking for things to kill so that you can sell anything left behind for the privilege of blowing your entire bank account on quest items.

One of the major shortcomings of Prince of Qin is that its pacing is far too slow.  Its world is huge, but there's too much nothing in it - you'll spend too much time walking across endless fields looking to find something interesting.  Weapons and armor are hard to find, so you'll spend long stretches of time using the same equipment.  Weapons can be upgraded with gems (surprise, just like Diablo II), but the gems are difficult to come by as well.  After hours of gameplay, you'll find yourself with the same basic equipment that you started with and still unable to cast any spells.