Shovel Knight is a love letter to NES games. In fact, had Shovel Knight been originally released on the NES it would certainly have taken its place among the best games available for that system and would still be fondly remembered to this day. While its 8-bit graphics and chiptune soundtrack may make Shovel Knight feel a bit dated to those gamers not experiencing an NES nostalgia high, the gameplay will appeal to anyone who enjoys a good, and challenging, platform game.

Like many NES adventures before it, Shovel Knight's world is populated with towns in which you can converse with the locals and purchase upgrades and the dungeons belonging to the Enchantress' knights. A world overview map gives you a little choice as to which knight's dungeon you want to take on next, which can be helpful if you're having a little trouble with one of them. 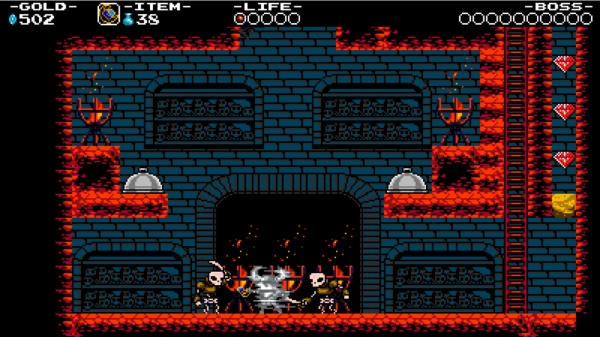 Each one of the dungeons is uniquely themed to fit the personality of the knight that waits for you at the end and serves as your opponent in the level culminating boss fight. This not only affects the look of each level and the monsters within, but adds variations to the gameplay. When you take on Specter Knight's realm, for example, prepare to make your way through darkened rooms only briefly illuminated by lightning, and when you enter the Plague Knight's lair you'll have to contend with erupting and exploding potions everywhere.

Given that your name is Shovel Knight, it's not really all that surprising that your primary weapon of choice is a shovel. You can swing it at enemies or bring it down from above pogo-style in a move that will surely elicit fond memories of the Duck Tales game. When you're swinging the shovel you'll have to be careful because each strike will generate a little kickback (and there's even more of a knock back when you get hit by an enemy) and in Shovel Knight's platform-heavy world an ill-timed swing can send you falling to your death. You can also use this to your advantage as well, and one-hit kill an enemy by sending him over the edge and into oblivion. Secondary weapons and magical attacks are available as well, and while they do have their uses I found that it was the shovel that was used the most in the end. 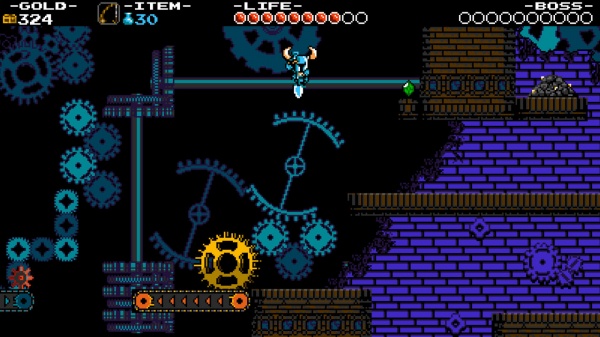 The shovel has other uses as well. You sometimes come across little dirt piles, and a few seconds of shoveling these will uncover a little treasure. You can also dig through some walls and platforms - sometimes this is necessary to get through a screen but at others it's a good way to find many of the game's numerous secret rooms and tunnels.

A good portion of the game's challenge outside of the boss fights comes from the game's platforming. The game's controls are tight and edge-detection is spot-on, but there's no forgiveness for a mistimed or misjudged jump. I found that my deaths due to jump challenges far exceeded those at the hands of enemies. Penalties for death aren't too severe, though; you lose some of your money (which can be retrieved later at your place of death as long as you can get to it and don't die again in the meantime) and you travel back to the last checkpoint that you passed. The checkpoints are spaced well enough to avoid long frustrating slogs back to where you just were as long as you didn't get greedy and hack apart the checkpoint totem to grab a bunch of extra treasure. This gentle death penalty coupled with unlimited lives makes the game a little more accessible to gamers who don't necessarily possess leet platforming skills. Persistence and patience will eventually pay off for those gamers. You do have to complete a dungeon in one sitting, though. I found that a bit annoying since boss fights can take a little while to get through and if you don't commit the time to make it all the way to the end of a dungeon you'll have to start it all over again the next time that you play. 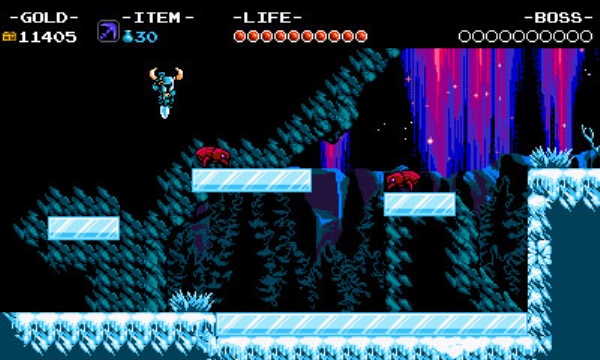 Overall, there's a lot of enjoyable and challenging gameplay in Shovel Knight, and its NES nostalgia vibe will wrap you in its warm embraces. If 8-bit NES gaming means nothing to you or challenging platformers aren't your thing, then you can take a pass on Shovel Knight. Everyone else will have a great time shoveling it all in.

Final Rating: 90%. One shovelful after another of classic NES game inspired goodness.