If you've ever played a Breakout style game before then you already know the basics of the game. You launch a ball at the lines of little spaceships at the top of the screen, the ball destroys the ships that it comes in contact with, and you must use your ship to keep the ball in play by preventing it from dropping out at the bottom of the screen. You know the routine. 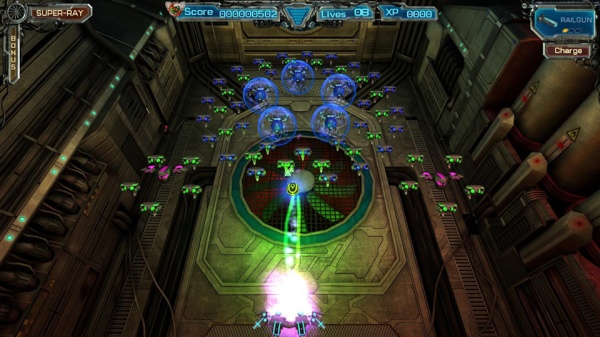 As you make your way through the game's levels, though, new challenges are added to the gameplay. Ships may need to be hit multiple times to be destroyed, some may be able to briefly boost above the playfield and safely away from the ball, and some may be able to generate shields to deflect the ball. The playfield itself may present its own challenges as well, with different levels adding spinners or other obstacles that can send the ball bouncing (or even warping) off in unpredictable directions.

There are also a few twists to the formula which will be a benefit to you. First there's the Super Beam which slowly charges as you destroy enemy ships. When it reaches full charge a beam will strike down from the sky and destroy an enemy at random. Also, some enemies drop power-ups when destroyed and if you catch them with your paddle, I mean spacecraft, and you'll be awarded the power-up for a short period of time. Some of these will arm you with weapons that can be used to destroy the enemy ships directly, while others will have an effect on the gameplay such as slowing everything down to a more leisurely pace.

Usually the soundtrack of a game like this isn't really worth mentioning in a review, but it is in the case of Ionball 2. The soundtrack consists of driving and booming dubstep and techo tracks, and you'll either love it or hate it. Or you may love some of it and hate some of it. I'm not quite sure if every level has a unique track, but at the very least there are a lot of them, which is a good thing because they are so bombastic that it would really be difficult to listen to the same track over and over again with every level. 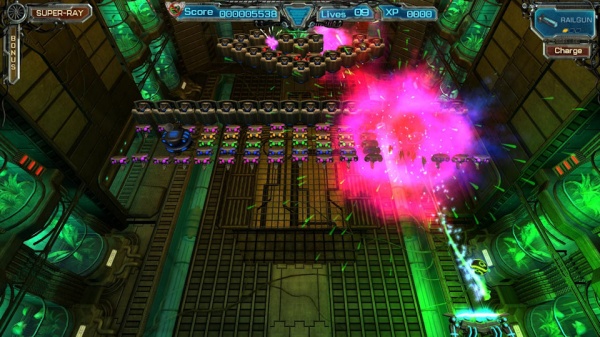 There's a ball in there somewhere

As for the gameplay itself, I liked the variety of ship types and obstacles that helped each level feel at least a little distinct. However, I felt that the playfield was too short, giving you very little time to react to the ball once it began dropping towards the bottom of the screen. This is especially problematic because it can be impossible at times to see the ball. The ships exploded in large, firework like explosions of color that completely obscure the ball. With the obstacles and other things that can send your ball in all sorts of directions, keeping track of where the ball is at all times is even more important in Ionball 2 than it is in your average brick-breaker. I lost the ball in all the 'noise' often enough that it really did detract from my enjoyment of the game and lead to many frustrating moments. Ionball 2 adds a few twists to the Breakout formula to make things more interesting, but then counters that with the fundamental issue of making it very difficult to see where the ball is going.

I had some enjoyable moments playing Ionball 2, but overall it's hard to recommend it to most gamers. Constantly losing the ball in cascading explosions of color and then having almost no time to react when the ball drops out of the fog of sparks can lead to a lot of aggravation, and this may in turn lead some gamers to start punching the real bricks in their walls.

Final Rating: 66%. It's like playing Breakout during a rave.