You might look at Broforce with its 16-bit era graphics and its over-the-top skewering of action movie heroes and dismiss it as a mindless side-scrolling shooter that serves to deliver a punchline to a joke and not much else. I hope not, because under all those "bro" jokes and puns and the non-stop explosions lies a pretty good, and challenging, game.

The goal of each level is basically the same, get to the chopper, which given the nature of the game shouldn't come as a big surprise. You start out with a randomly selected "Bro", a character based on a famous action movie hero, each of whom wields their own unique primary and special weapons. Even casual movie fans shouldn't have too much trouble determining the inspiration for each Bro as they all carry names like Rambro, Brominator, Brobocop, and Broheart - and, yes, the 80s are represented on the roster (broster?) more than any other decade. Standing between you and the chopper is an army or mercenaries and terrorists - later in the game other action movie baddies like aliens make an appearance - and while they're not the brightest enemies in the world you'll still need to be careful because a single shot will take down your bro. You might think that in a game of this kind that the first thing that you would do is to push down the fire button and then relentlessly push your way from left to right without ever letting up on it, but that's not the case. Well, you can try it, but you probably won't be able to get to the chopper doing that. There's a puzzle aspect to the levels in selecting the best path to take, and the direct route is usually the one that's the most dangerous. Usually the best course of action is to make your own path. 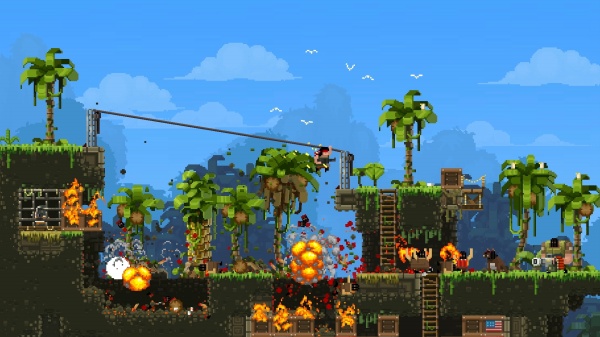 The levels in Broforce are delightfully destructible. Fire your primary weapon into the ground and you can 'dig' a tunnel for yourself - horizontal or vertical, it doesn't matter when a Bro can scale and descend vertical surfaces with his knife - while your explosive weapons can blast open big holes and caverns. This destruction not only opens new paths through a level, it has tactical implications as well. Tunnel under a minefield to avoid its dangers or under a boulder to send it crashing into the cavern below and onto the heads of your enemies. The more you play the more tricks like these you'll discover, but you'll need to be careful. You can easily bring the roof crashing down on your own head or blow your way to the "bottom" of a level, which essentially opens a bottomless pit that will take your life. And your enemies love to stockpile explosives everywhere, and a carelessly (or carefully) placed explosion can lead to an utterly chaotic chain-reaction.

In most levels you'll have three lives to make it from the drop point to the chopper, and each time you play a level you'll begin with a randomly-selected Bro. The bros really do play differently and you'll have to adjust your tactics each time you lose a Bro and a new randomly selected one takes over. Rambro is a good, straightforward Bro with his machine gun and grenades, while the Blade-inspired Brade will force you to get up close and personal to use his primary melee-based sword attack. And MacBrover (MacGyver) likes to simply toss bundles of dynamite everywhere. You can gain additional lives for a level by finding and rescuing POWs, but when you do you'll switch to a new Bro. You'll need to decide whether or not you want to keep your current Bro badly enough to forgo picking up an insurance life. However, rescuing POWs is how you discover new Bros to add to your roster.

The levels are surprisingly challenging, given the game's melodramatic tongue-in-cheek humor. They are certainly challenging in a good way rather than in any unfair or unbalanced way in which cheap deaths masquerade as an increased level of difficulty. Each time I failed in a level I felt compelled to go charging right back into it, certain that I had a new trick up my sleeve that would get me to the chopper this time. This is also the case in the game's boss fights that are epic, multi-stage affairs that are difficult to walk away from until you can do so victoriously. The game supports co-op play, and while that may seem like it would make it easier to get through the game the opposite is actually the case. Trying to keep the mayhem at least somewhat under control is difficult enough when you're by yourself, but add another person to the mix and real pandemonium ensues. While it may not help you finish the game faster unless you are a seriously coordinated team, co-op can certainly lead to so much craziness and laugh-out-loud moments it's worth playing just for the experience of playing it. 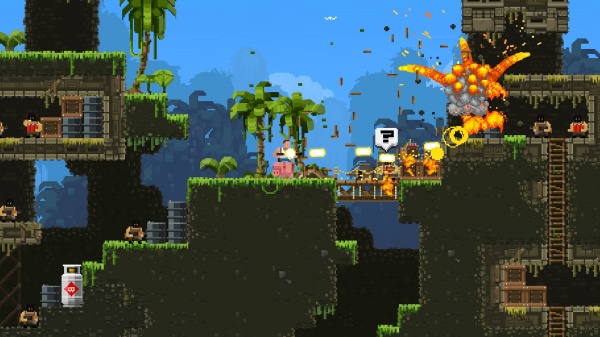 It would have been easy to just stick to the Bro-jokes and hope players wouldn't tire of it too quickly, but the game's developers didn't make this a one joke game. There are humorous touches throughout the game's levels and part of the fun in playing the game is discovering them all. In one level I paused for a moment on a ledge while deciding how to deal with the pack of attack dogs below me when they apparently got bored waiting for me and so began to eat each other. Soon I was no longer facing a pack of dogs, but rather one now quite large dog. Surprises like that keep you coming back for more.

When I first sat down to play Broforce my expectations were set relatively low for the game. I thought it would be a one-joke affair that would be good for a couple of laughs before the premise wore thin, and that the gameplay would provide for a little harmless diversion filled with non-stop gunfire. It didn't take long for the game to both surprise me a very good way and to hook me in, and if you give the game a shot I'm sure you'll find the same thing.

Final Rating: 90% - A great game wrapped in every action movie ever.