Here we are going on 10 years since Resident Evil 4 had been released on GameCube and we have a PC rerelease in HD. If I recall correctly the original PC release had been riddled with issues. With this release has Capcom redeemed themselves or is it too late?

Reoccurring character Leon Kennedy has been tasked to find the U.S. President's kidnapped daughter Ashley Graham. Set in a rural village in Spain, Leon finds himself faced against the village's deranged occupants. It doesn't take long for Leon to figure out that the villagers must have taken part in the kidnapping. Leon is later captured by Osmund Saddler who is the leader of the religious cult Los Illuminados and injected with the Las Plagas, aka mind-controlling virus, which explains why the villagers are not your typical zombies from previous Resident Evil games. Sadler also reveals that Ashley has also been injected and plans to use her as part of a terrorist attack on the U.S. The objective is crystal clear at this point, find a cure and eradicate the Illumnados. 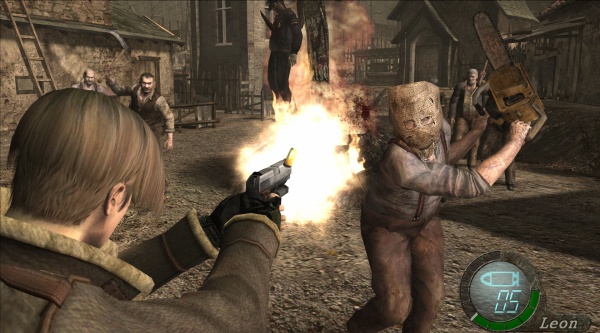 RE 4 at the time of initial release was way ahead of its time, introducing the over the shoulder third person view to the RE series and pulling it off really well. RE 4 still claims to be a survival horror game, but to me it is more action horror. The enemies aren't your typical "dumb" zombie as experienced from previous games, but are human beings under mind control from the virus. Enemies react quicker and attack smarter. Most common enemies wield pitchforks and dynamite. They will even charge at you and attempt to dodge your bullets - the more modern A.I. is a welcome challenge. One thing that really set RE 4 apart from other games at the time of its release was the unique boss encounters. Each boss had phases of abilities depending on the type of attack or amount of damage unleashed upon them, making it seem as if the bosses were evolving into a completely different boss. To give the series even more of an immersive feel, Capcom added quick time events which are knee jerk reaction button combinations that need to be pressed in a set amount of time. If time slips by or the incorrect button configuration is pressed bad things happen, usually resulting in immediate death.

To help Leon along the way there is a mysterious merchant that shows up throughout each level who carries a massive weapons cache. Leon can handle just about any weapon, which is good because the merchant has everything from a pistol to a rocket launcher. The only problem is Leon can only carry a set amount of items in his case. Limited by space you must choose your arsenal wisely. The best part of the weapons cache is that you can upgrade all of the weapons, making them more powerful, with higher ammo capacity, and faster reload times. As you progress further it is evident that this is more of a requirement than a choice. The merchant even entices Leon with free weapons by introducing a type of mini game. Throughout the early part of the levels are hidden jewels; shoot enough jewels and you get a sweet weapon. Later in the game there is also a shooting range mini game that will reward you with even more weaponry. This is a welcome break from blowing away infected villagers. 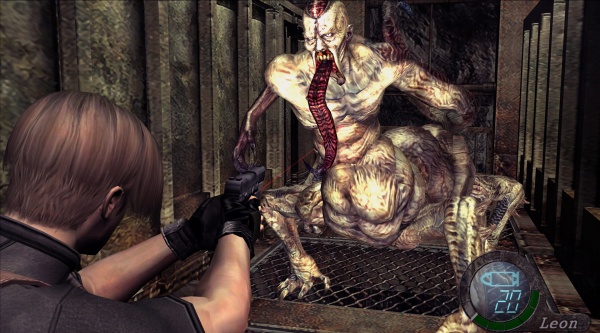 One of the greatest downfalls of the RE series that has always boggled my mind is controls. In order to attack, your character is locked into position to aim, throw grenades, or attack with a knife although you are being chased by infected and want to run and shoot! In its defense the control layout does lend itself to a type of stand your ground effect and makes the infected situations more intense. I didn't even try to use the keyboard and mouse and went straight for the controller. It is a little awkward at first but after a while it becomes more fluent, less mistakes are made, and the controls actually begin to feel natural.

In the end I am always a sucker for a Resident Evil game. Each one has a unique story, intense enemies, and memorable experiences. RE 4 had been in my opinion way beyond anything else that had been out on any system in 2005. RE 4 has aged really well and just needed a fresh coat of paint, or in this case HD textures. Even though I had previously played and conquered the game on GameCube it was really fun to revisit. RE 4 not only revolutionized the survival horror genre and RE series, but also introduced gamers to quick time events and phased boss encounters. RE 4 became an instant classic, yet it's still relevant to today's style of play, and a game that should be played by any survival horror or RE fan.