Back in the day, Ace of Aces was a book-based air combat game. Each player would select an aerial maneuver in an attempt to gain a positional advantage over their opponent. Based on the comparison of the maneuvers chosen, each player would be directed to turn to a page in their book that gave the view from their cockpit and another series of maneuvers from which to chosen. Sid Meier's Ace Patrol uses the power of the personal computer to do much the same thing. 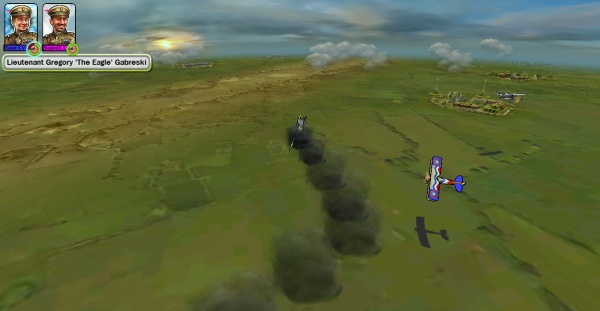 Take that, you dirty Kraut!

Sid Meier's Ace Patrol is a simple one- or two-player game simulating air combat in World War I. The game eschews the immersive experience of a first-person flight simulator and the more complex physics that the experience brings. Instead, the game uses a hexagon based movement system with a view of action from the side, much like a board game. Flight physics is simplified by giving the player a selection of "legal" maneuvers so you don't have to worry about pushing your pilot or aircraft beyond its limits. Airspeed doesn't play a factor in the game and altitude is generalize to one of four levels (well, five if you count the ground). It was very easy to learn the game's mechanics despite the lack of documentation. There is a tutorial and hints are displayed at the beginning of each scenario. 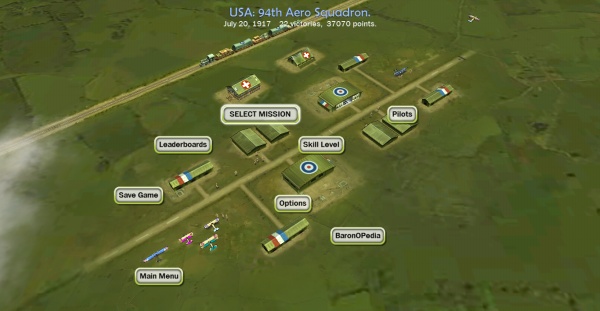 The game itself is set up in a campaign style. The player selects one of four nationalities (British, American, French or German) and a special skill for one of their pilots. During the game, players manage a squadron of four pilots, selecting skill upgrades as pilots increase in experience and aircraft upgrades as the squadron completes missions. The player has the option of switching aircraft types for each pilot between missions. Aircraft have five characteristics that they are rated from one to five to allow players a general understanding of each type's performance against other aircraft. 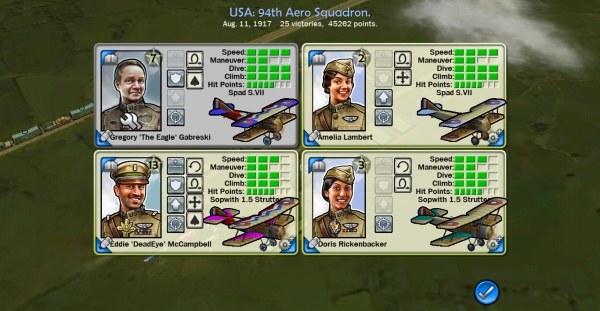 Covering the years between 1916 and 1918, the player's squadron participates in four campaigns with six battles each. Each battle presents the player with 1 to 3 different missions with varying degrees of difficulty and reward. Missions are performed either over friendly territory or enemy territory. The location of the mission will determine what side of the map the objective is on. Landing behind enemy lines will result in your pilot being captured as a prisoner of war and unavailable for the remainder of the campaign. Crash landing in friendly territory will result in injuries that will keep the pilot out of battle for a number of missions. Missions available are randomly selected with the exception of the final battle which appears to always be a "boss fight" against an enemy zeppelin and its fighter escort. 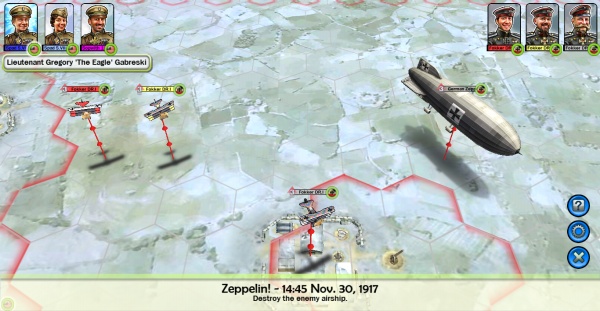 The Zeppelin boss and his little friends

I found the game to be highly enjoyable simulation of air combat with a small element of asset management. Missions are short and could be completed in less than 15 minutes and an entire game in the space of two to three hours. The randomization of missions for each battle provides extended replayability.

Final Rating: 80%. A simple game with a simple interface that is a delight to play.