The Wolf Among Us - Episode 1: Faith Review

I was very skeptical about playing this game for a few reasons. First, I am still bitter about the loss of my Walking Dead save game on Episode 5. Second, it feels like The Walking Dead just finished not too long ago and I wasn't sure that Telltale could pull off another smash hit in such a small period of time. Third, I have absolutely no connection to the comic book series Fables on which The Wolf Among Us is based. However, within minutes of starting to play the first episode, subtitled Faith, renewed my faith in Telltale as well.

The Wolf Among Us takes the characters from the fables that you remember from childhood such as The Three Little Pigs, Snow White and the Seven Dwarfs, Alice in Wonderland, and Beauty and the Beast, and places them in modern Manhattan, New York in an area called Fabletown. Your main character is the wolf from Three Little Pigs who now uses the alias Sheriff Bigby Wolf and is the sworn protector of Fabletown and those who live there. Bigby wanders the streets keeping tabs on everyone making sure that they are maintaining a low profile. Some give Bigby a hard time by constantly reminding him of his big bad past while others are merely trying to make ends meet and struggle with real world issues. It doesn't take long for Bigby to find trouble when he comes across an altercation in an apartment building run by a toad. Bigby investigates and finds an attractive girl being assaulted by a tall bearded lumberjack looking guy called The Woodsman. Ultimately Bigby has a hard time controlling the situation and ends up out the window with The Woodsman - luckily a perk of being a Fable is borderline immortality and so both Bigby and The Woodsman walk away from the scene. What Bigsby doesn't know, though, is that the day is about to get worse. Shortly after saving the life of this mysterious girl finds himself trying to solve her murder. 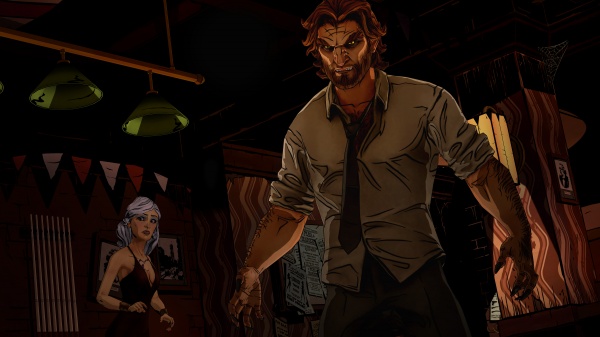 The greatest thing about this game is that as Bigby meets more Fables during his investigation you unlock books. These books give you a view into the background of each character in their original story are well as their present state - meaning if you are anything like me and draw a blank on any of the Fables you encounter, there's a mini history lesson to bring you up to speed. Even if you aren't familiar with these characters from your past they are still enjoyable and memorable. As with The Walking Dead the experience isn't just about the people you meet, but how you interact with them. Telltale is amazing at giving the gamer the choice of how to handle situations thus carving a unique experience throughout each episode. One lesson I learned from The Walking Dead is that no choice is forgotten no matter how small the impact. Sometimes the choices come back to haunt you while others can save your life. There are plenty of those identical moments in The Wolf Among Us, which in the first episode feel more like plot-driven choices with little affect but that's the fun of seeing their eventual impact in later episodes.

By no means is this game set up to be a huge action adventure game. Similar to The Walking Dead, Telltale stays true to their point and click style of control with a mixture of quick-fire button combinations and cel-shaded motion graphics. Some people may be turned off by the lackluster control scheme, however in a comic-themed game it makes perfect sense. There is a nice blend of dialog and action within each scene and the pacing never really seems to slow down for long - Bigby never gets much of a break in this episode.

After playing The Wolf Among Us you can see that Telltale has a real grasp on creating amazing interpretations of comics. Even without having any knowledge or relation to the Fables comic I can't wait for the next four episodes. The only downside to the game is having to wait for each new episode to come out...

Final Rating: 90%. If the following episodes are anything like Faith they will huff and puff and blow your mind.