Brutal Legend is an homage to metal music, and how much of an appreciation that you have for all things metal from Black Sabbath to Rob Zombie will have a big impact on how much you enjoy the game. And a healthy appreciation for Jack Black wouldn't hurt either. The game's protagonist, Eddie Riggs, is a roadie who, with the help of a demonic belt buckle, is transported to another world. Riggs looks, talks, and acts like Jack Black, his public persona anyway, and you're in for a whole lot of Jack being Jack in the game and so had better be OK with that. Personally, I think he's really in his element here, and it's hard to imagine the game being as much fun without him.

The strange new land Riggs finds himself in looks like it was built from an amalgamation of forty years' worth of heavy metal album cover art. It's a world that was forged by the ancient titans of metal, but its rock purity has become corrupted by demons and impure forms of rock like hair metal, glam, and goth. Riggs quickly joins forces with the local resistance movement, helping them form an army and taking their show on the road to fight for rock and restore the land. 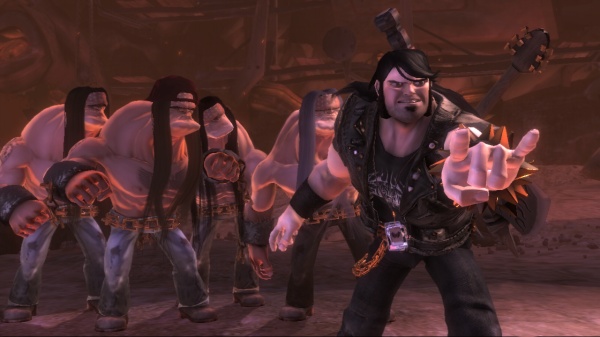 The game's world and story are by far the best thing about the game, and the desire to see the story through to its completion is a bigger motivation for finishing the game than is the gameplay itself. The game's world is filled with mountain-sized guitars, cliffs made of giant speakers, and magic spells that are cast by playing guitar riffs. Think of an epic fantasy world like that of The Lord of the Rings, but replace all of the monumental locations and iconography with heavy metal inspired tropes and you'll have a good idea of what to expect from the game. Taking it all in, I can't help but think that Brutal Legend would make for an absolutely awesome movie and that the whole experience would have been better if the gameplay didn't get in the way.

Part of the issue is that the game is a mishmash of gameplay styles drawn from the hack-and-slash, strategy, and open-world action game genres. The hack-and-slash side of the game equips Riggs with an axe (guitar) and an actual axe (axe). The axe is used in the obvious way, while the guitar fires bolts of lightning that momentarily stuns enemies. As you play the game you'll have the opportunity to purchase various combos that use these two weapons in different combinations, but overall the fight engine is left rather basic and underdeveloped. Button-mashing is an adequate strategy for success.

The strategy gameplay kicks in at certain points in the game when Riggs must lead his army against the minions of an enemy. The game makes full use of its rock theme during these battles - your home base is your concert stage, fans are the resource used to pay for your units and to "harvest" them you must build merchandise booths on "fan geysers", and your units include "headbangers" and "roadies". As Riggs you're basically your side's hero unit, able to jump into a melee and quickly turn the tide of battle with your attacks and guitar riff spells and buffs. Your units take their orders directly from Riggs - there's no battlefield map from which you can issue orders to remote units - and those orders are of the rudimentary "stay here" and "attack that" variety. During these battles Riggs sprouts demon wings that allow him to fly and see more of the battlefield while giving orders, but you have to be a glutton for punishment if you choose to fight the battle as a flying general. Battles fought by issuing orders to units turn into long, drawn-out battles of attrition that can run for an hour or more. On the other hand, building a band of units and then leading them into battle yourself and using Riggs as an uber unit usually leads to quick victories. These strategy battles probably sounded like a good idea on paper, but instead they make the flow of the game come to a grinding halt. After a couple of these battles I had had enough of them, and would cringe whenever I was forced to fight another one. 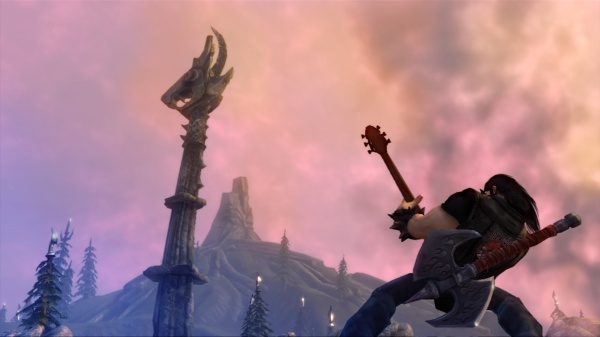 The game is structured as an open world environment in which you're free to explore the world behind the wheel of your roadster until you decide that you're ready to take on one of the story or side missions marked on the map. There are a number of things to look for and discover while exploring the world such as special jumps, secret shrines, and viewpoints; the kind of things that are fun for completionists to seek out but are generally ignored by those just trying to push their way through the game. The side missions are rather disappointing - there aren't that many different types of side missions and they're repeated over and again throughout the course of the game. With all of the imagination that went into designing the game's world it's a shame that not much went into designing the side missions.

The game includes a multiplayer mode which pits players against each other in the game's strategy style battles. This mode includes three factions to play, giving you the chance to command demonic and goth forces in addition to Rigg's metal faction. The addition of human opponents adds a little more unpredictability to the strategy battles, but they still play out pretty similarly to the single player game battles. Build a party around your leader and press the attack against your opponent's stage early and often and you'll be pretty successful. Overall, I didn't find the multiplayer strategy battles to be that much more compelling than they were in the single player game.

In spite of its faults and flaws, overall I had a good time with Brutal Legend. This was in no small part due to the fact that I enjoyed the game's story, soundtrack, and fantastic setting. If rock's not your thing, though, the gameplay on its own is probably not enough to make the game worth your while.