Out of the Park Baseball 14 Review

Everyone has had that moment when watching their favorite sports team and says "What kind of play is that?", "Why are they keeping him in the game?", and the infamous "I could even do better". Now is the time to step up to the plate, literally and put your skills to the test. Out of the Park '14 is a baseball simulator that gives the player complete control over a team's destiny by playing as the Commissioner, GM, or both. I have played several mainstream sports games with simulators built in, however now I think of them as a mere fast forward button compared to OOTP14. Don t be fooled by the title, this isn't your typical MLB The Show; it is a text-based statistical model which is developed over time by your decisions.

Right off the bat you are presented with links to an online manual, tutorial videos, and the forums. As the game recommends for beginners, I took to the manual and videos. However after reading the manual and watching the videos I knew I was going to be in for a bumpy ride. There are several game types to choose from including Major League, Custom (create your own rules), Historical (play any historical season from 1871-2012), and Quick Start (start a pre-configured game similar to an exhibition). There is even an option for those who wish to continue their dynasty from OOTP '13. I chose to stay simple and started a Major League game. 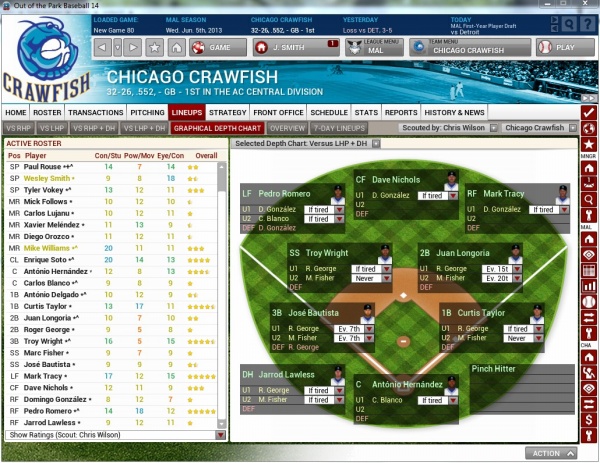 When starting a new season you need to create your manager, complete with name, birth, and employment. The biggest choice you will make for your manager is employment. Your manager can start unemployed, which is based on available positions within a league or you can choose from the vast list of teams from international, minor, and major leagues. I don't have a good enough grasp for minor or international leagues so I picked my home team Washington Nationals and chose a GM role.

After choosing my team I figured that I was well on my way to playing a baseball game, but not so fast! I had to choose what decisions I would be making as a manager - which the game calls the manager options. I kept it at the defaults; however, you can set it so the computer will make decisions for you. The manager options range from managing team injuries, to signing, releasing, and trading players, news subscriptions, ... even what happens when you are on vacation. Immediately I was overwhelmed and surprised by the amount of choices this game has. After completing the recommended actions such as setting a scouting budget and choosing a free agent to strengthen my first base position I was ready to play some baseball. In order to move on you have to simulate the season to your first game. If at any point during your simulation something monumental happens, it will stop and tell you any major events that you should look into. These events can range from emails on news of other team's progress to injuries, future prospects, trades, signing, and releases. None of them impacted my team so I was able to simulate to my team's opening day against the Marlins.

As for all typical sports games you get to check out your lineup prior to the game. For OOTP14 though I am not talking just about who will be in the lineup but the strategy of my offense, base running, defense, substitutions, and pitcher warm-ups. I am sure there is a ton of strategy behind it all though it's opening day: let's play! Alright now we are talking, the sound of the game catches my attention. You can hear the crowd cheering and booing and the old organ playing. All I need now is a hot dog and a cold drink. The next thing that caught my attention was the game interface. It is a layout of the actual ball park and all of the defensive players on the field in their correct position. The offensive lineup is on the left side of the screen complete with statistics on each player. The controls you are given on the bottom portion of the screen will depend on if you are at bat or in the field. Defensive controls range from the type of pitch you want to throw to the infield/outfield approach. Do you want to check in on how a pitcher is feeling during a game? Well you can even visit the mound and get feedback based on his performance. Offensive controls are very similar; you can choose to take a pitch or swing but not much else. You can choose to play pitch by pitch or you can even simulate each at bat, half inning, full inning, to the middle or end of the game complete with in game text based commentary. If you choose to simulate the game, everything is generated based on the player and team stats. If there are any major decisions to be made during the simulation, play will be stopped for you to make any changes such as substitutions for a player because they are hurt or fatigued. While you are playing and your curiosity gets the best of you can check out what else is going on in the league by checking on other teams' games complete with scores and stats. You can even choose to sit in on another game and watch. Though controlling the game seems rather simple and I was projected to win based on previous stats, it was evident that as a GM you are clearly the determining factor on your team's success ... and I failed them. 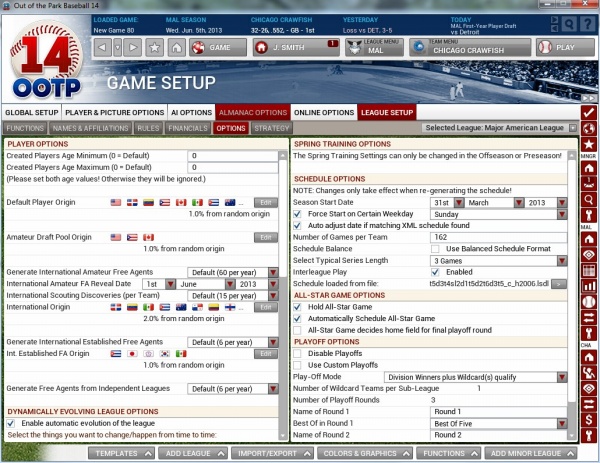 Simulating the game is honestly just scratching the surface, though for me it was the most exciting part of the game. There are so many aspects to take into consideration. For example just signing a free agent doesn't mean you click a button and they are on your team. They have stats you must consider, quirks that may not fit with the style of your team, and down to the amount of money they are demanding for a contract. Make an offer and they will say they need to think about it. In my experience I offered a guy $300k less and said he would think about it. Well I ended up simulating half my season until he made a decision. There are so many variables, not only for free agents, but for deciding on a pitching rotation, to dealing with player fatigue, to extending contracts. You can even create a player from scratch, generate or even import a picture complete with a baseball card. It took me a few games to realize that simulating the game isn't really the heart of the game. You are the GM and you have a job to produce a product, not just sit there watching the game unfold, and that product is a healthy, well-balanced team that wins championships. As a GM you can literally make almost every decision you can think of minus the food at the concession stand.

Think you have honed your skills enough in solo play? Then take it up with other human players in an online league. The experience doesn't change much minus the fact that you will compete in a season with human players instead of a computer. Nothing better than trading players with your friends or crushing them in the playoffs. I didn't get the complete social experience since I didn't know any of the people I was competing with. However I can see this is where most people would get their enjoyment from the game.

Overall my perspective on simulation based games has changed. This is by far the most advanced and sophisticated simulator around. Though intimidating and a little confusing at first, this game is perfect for the hardcore fantasy league players, as well as anyone who has a huge passion for the sport. OOTP14 is packed with statistics and strategy that literally takes time and experience to master. I have a lot of respect for the amount of detail that is packed into what may seem a simple text-based simulator. While this is not my ideal baseball experience, OOTP Developments has delivered a home run.

Final Rating: 89%. OOTP 14 is a complicated, in-depth simulator geared towards the hardcore gamers of fantasy leagues.