In Edna & Harvey: Harvey's New Eyes, you play as neither Edna nor Harvey, but rather as Edna's friend Lilli. Edna and Lilli are roommates at a convent orphanage run by the strict Mother Superior, and Edna spends all of her time hatching plots to escape. Her plans inevitably require Lilli to do all of the groundwork, and Lilli is perfectly happy to oblige. 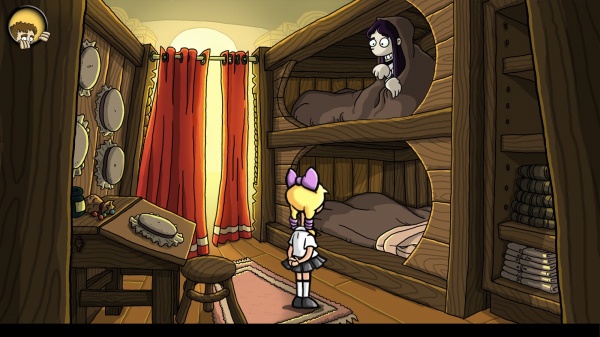 Edna has another task for Lilli

Now Lilli is not your typical little girl. First of all, she somehow manages to carry out conversations with people despite the fact that she only ever utters single syllable filler words like "um" and "er". She also doesn't quite view things in the way a typical child would, at least that's what the game's narrator would have us believe as he gives us a running commentary on Lilli's thoughts, observations, and state of mind. Oh, and there's that other thing. The thing where Lilli's actions seem to accidentally but inevitably lead to the untimely demises of her classmates. It's not that she does any of it on purpose, or does she? And what's with those little goblins that resemble potatoes that keep showing up to coat the scene of each death in bright pink paint?

Harvey's New Eyes is an adventure game in the classic sense - you move Lilli from one screen to the next looking for objects to add to your inventory, objects that will be needed later to solve puzzles on other screens. The game hits the sweet spot with its puzzle difficulty - the puzzles aren't overly challenging or unfairly obtuse, but aren't overly easy either. At certain points in the game you'll face some logic puzzles as well, so it's not all a matter of using one item with another in the game. Overall, the game should take about six to eight hours to complete, which includes the time you'll spend stuck and staring at the screen while trying to reason out what to do next. 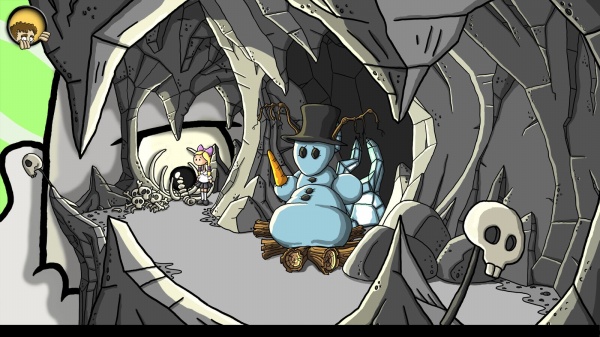 Lilli takes a walk through her psyche

I enjoyed my time with Harvey's New Eyes. The story is a bit strange and twisted, and grows more so as the game progresses, which to me is a big plus for the game, especially considering how generic and clich�d most classic adventure game stories are these days. In fact, I found that I was playing the game as much to see where the story went as for the gameplay itself. The game's artwork fits its mood perfectly, looking like a bright cartoon on the surface, but with a slightly subversive bent on closer examination. If classic adventure games don't appeal to you, I doubt that Harvey's New Eyes will change the way that you feel about the genre. If on the other hand you're not adverse to a little point and click adventuring now and again, the game's twisted tale makes for an enjoyable adventure.

Final Rating: 80%. Just twisted and demented enough to be recommendable.