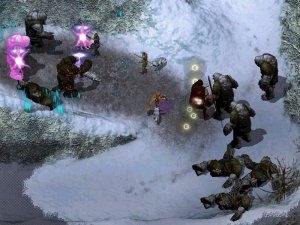 You'll see that this is not your father's Dungeon & Dragons before you even start play during the time-honored character creation process.  Gone are the random die rolls to create your characters' attributes, replaced by a set of base statistics based on your character's race and class, and  bonus points that you can add to these statistics as you see fit.  In addition, some of the races can be further specialized into sub-races.  For example, elves come in three varieties, moon elves, wild elves, and the dark drow.  The sub-races inherit most of the features of the race from which they are derived, with a few additional bonuses (and drawbacks to maintain balance).

Another traditional feature that you won't find in Icewind Dale II when you are creating your characters are multi-classes.  Set multi-classes have been replaced by a far more flexible system that allows you to customize your character's class every time he or she levels up.  When a level is gained, you have the option of gaining the level in the current class, or adding a level in another class.  Focus will build a stronger character, but there are some decided advantages to diversifying.  The one restriction on this system of multi-classing is a 20% experience penalty if any two of your character's classes are more than two levels apart.  However, this does not apply if one of the classes is the character's race's preferred class.  For example. elves prefer to be wizards, so you can add a fighter level or two to toughen up your elven mage without incurring the experience penalty.

Unlike the previous games in the series, you will need to create an entire party of six adventurers at the start of the game - NPCs will not join your party in Icewind Dale II.  For players that are concerned about picking the right mix of characters to complete the game successfully, the game provides a number of pre-built parties.  These parties each have their own personality and history, so you won't suffer too much by not putting your personal touch on your party.

There are more surprises in store as you create your party in the form of skills and feats.  At creation time and when leveling up, characters will be given a set number of points to spend on obtaining and improving their skills.  The skills include passive abilities such as bluff, diplomacy, and intimidation which will make different options available when conversing with NPCs, and skills which must be activated to be used, such as all of the thieving skills.

Feats are special abilities that are awarded every few levels to your character.  Like skills, feats can be active or passive, and the available feats vary by character class.  They can give your character special advantages in combat, such as improved initiative and damage, spell casting, such as better spell penetration or the ability to cast spells even when silenced, or provide an advantage when trying to make saving throws.

Once your party is complete, you will begin the game in Targos, one of the Ten Towns of Icewind Dale.  The town is having trouble with goblin invaders and is bracing itself for the arrival of a large goblin force.  Your quest is to help the town repeal the invasion and then go out and discover the cause of the goblin incursions, putting an end to them in the process.  If you did not play Icewind Dale, you do not need to worry about coming into the middle of a story; Icewind Dale II stands on its own. If you're curious about what went on in the prior game, you can find books in town that will provide a synopsis of the first game and its expansion.