No One Lives Forever 2 Review

The first No One Lives Forever game was known for its originality, humor, and fun gameplay.  No One Lives Forever 2: A Spy in H.A.R.M.'S Way (NOLF2), does a great job of maintaining the standards set by its predecessor, and action gamers should not miss this thoroughly enjoyable sequel.

Once again, you take on the role of super spy Cate Archer, an operative for a top secret covert agency known as Unity.  The evil conspiratorial organization H.A.R.M. has teamed up with the Soviets to hatch a plan to invade a small island and set-up a resort there.  Since this is the mid-60's, nuclear tensions are high and such a plan has the potential to set off a nuclear Armageddon.  It is up to you as Cate Archer to uncover the details of the plan and put an end to it before it can begin. 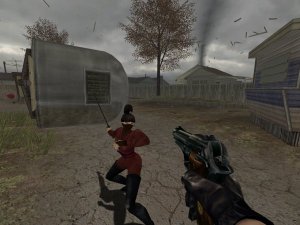 In true spy story tradition, your mission will have you globe hopping to exotic locations around the world such as Siberia, Calcutta, and Akron, Ohio.  Yes, Akron, and in a trailer park during a tornado, no less.  Overall the game features 15 chapters broken into several levels each, providing you with plenty of secret agent gameplay for your money.  All of the levels feature plenty of dry, and often somewhat silly, humor that demonstrates that the game's designers thoroughly enjoyed developing the game with their collective tongue planted firmly in cheek.  NOLF2 is the thinking person's Austin Powers, a delightfully clever homage to 60s spy movies without the crutch of scatological humor.

The levels are packed with little details that help to bring the game's world to life.  NPCs carry on conversations when they are not aware of your presence.  Office plants rustle with the breeze caused by your passing and will lose their foliage in a crossfire.  In Siberia you'll see the condensation of Cate's breath in the cold, and little rabbits scurrying through the woods leaving their prints behind in the snow.  When holding a listening device shaped like a ladybug, Cate will occasionally play with it as if it were a toy.  You'll keep your eyes peeled for all of these details as you are playing the game, and will be delighted every time that you find a new one.

Of course this would all be moot if the gameplay itself did not deliver.  NOLF2 does not disappoint on this count, due in large to its excellent AI.  Enemies in the game behave intelligently, and realistically react to your actions.  When you are trying to sneak around, they can hear your footfalls if you don't step lightly, or notice a door you've left open or a light switch left on.  If you are discovered, they'll often take a few shots at you and then make for an alarm switch or yell for backup.  When hostilities ensue, enemies make effective use of cover, or dive to the ground if caught in the open.  They'll work together to come at you from multiple directions (especially if an alarm goes off), and will make use of any secondary weapons they carry such as grenades when the opportunity presents itself. 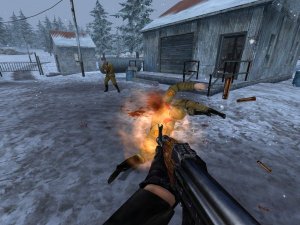 After a battle ends, you can search the bodies for weapons, ammo, and other items.  The game uses an interesting search feature that will let you instantly grab items from a slain enemy's hands, but requires that you spend more time searching to recover any additional items he or she may be carrying.  It is also a good idea to haul bodies out of sight (or use body removal spray) to avoid arousing the suspicions of anyone who comes across the bodies.  Areas are not always "clearable", and patrols can come through the places that you've already been.  If they find a body, they'll move in to investigate and then come looking for you.  An exception to this is the Soviet guards, who will take the time to first remove the bodies themselves to avoid the necessary paperwork.

There is plenty of opportunity to fight it out in NOLF2, but the game rewards smart play and the use of stealth.  Some missions will force you to rely only on your spycraft, as you will find occasionally yourself weaponless or in a situation that prohibits you from creating any casualties.  As an aid to stealth, you'll be able to use equipment that will shoot tracking darts at guards, disable security cameras, and a host of non-lethal ammunition such as sleeping and laughing gas, glue, and banana peels, all of which serve to incapacitate enemies for a short period of time.  You'll also be able to rely on your ability to hide in dark areas as long as you remain motionless, and on the excellent audio cues provided by the game to make your way around unnoticed.