Much like a zombie apocalypse, The Walking Dead is slowly starting to take over the world. First there was the well-regarded comic books (or maybe they're graphic novels ... I don't want to upset anyone) and next was the AMC television series that has also gotten good reviews. So while we're still waiting for them to come out with a reality series, or an energy drink, or sign a shoe deal with Nike they have taken the next somewhat logical step and ventured into video games. However it's not the type of game you might first expect from zombies...like much of the history of The Walking Dead they have done something a little unexpected and teamed up with Telltale Games to create an adventure game with a little undead killing thrown in for good measure.

First off, The Walking Dead: Episode 1 - A New Day is a pretty long title for a pretty short game. However, as the title certainly suggests, this is the first game of a series. Telltale has noted that there will be five games in the series. Episode 1 takes somewhere between two and three hours to finish, so if that holds true for the rest of the series we'll be looking at about a 15 hour experience. Episode 1 follows a formula created by other Telltale games but happens to do it better than expected. At its heart it is an adventure game, so don't expect a first-person shooter. This is a game that you will need to walk around a room a few times and click on everything in order to progress. 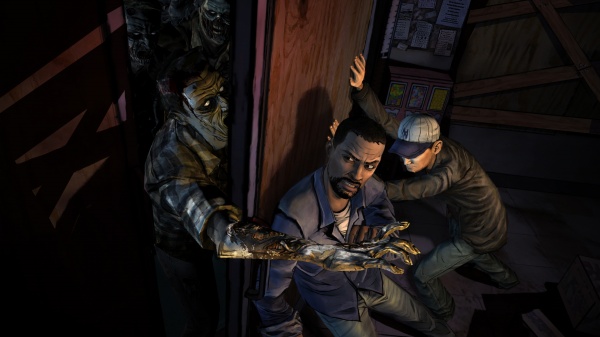 In Episode 1 you play as Lee, a former university professor that has been convicted of murder and is on his way to the big house when a car wreck frees him. Things happen and you soon meet a little girl named Clementine whose parents are...well...let's just say they are not going to be of much use to her anymore. After meeting Clemey you go off to a couple of different locations. I really don't want to get into much detail and risk ruining the story. Let's just say there are several, five or so, different places that you will be adventuring around and killing zombies in.

However, just because there is a zombie apocalypse going on doesn't mean the main objective is killing zombies. No, The Walking Dead is much more about the living than the dead. Episode 1 does a good job of introducing characters that you want to care about and know about. I really want to make sure Clementine is safe. I like her and that's not something I can say about many video game characters. I felt an instant bond between Clementine and Lee and I want to see what happens to each of them. Some of the other characters I don't really care about but I'm still curious what going to happen with them also. The strong point so far to the game is the story and the connection with the characters. There may be some slight problems with game mechanics here and there but nothing that makes a difference in my mind. Sure the camera can seem to be bothersome but it's not enough to take away from the overall experience even if it is irritating at the time.

The art style is a very cel-shaded/comic book style and it works wonderfully. Clementine is adorable with her baseball hat and the zombies are nasty looking. Although sometimes the animation of the facial expressions doesn't really seem to match up with what you would expect. Overall though it is a nice looking adventure game. The voice acting is better than expected. I had no trouble believing the motives and actions of any of the main characters. There are some quick-time events but even those that hate them will not find them too terribly irritating as they are few and don't last long. There will be times during the game where you might need to make some tough decisions...things like who might live or die. Conversations are the traditional dialog tree but there is a timer that makes things a little more frantic.

The Walking Dead: Episode 1 takes the zombie apocalypse and makes it a story about a man and a little girl trying to survive. It's well done with just a few odd things. It's not an action packed experience and that may turn some away.

Final Rating: 90%. The Walking Dead: Episode 1 is a great introduction to what I'm hoping is going to be a fun series.