First let's get the lackluster single player game out of the way.  Unreal Tournament 2003 takes place in the far future, where teams of combatants slug it out in a variety of arenas to take the crown ... or something like that.  In reality, the single player game is a series of games played against computer-controlled opponents, or bots.  Win a game and you get to advance to another in the next arena until you reach the end of the ladder, with each of the ladders consisting of five or six games.  There's not much of a plot (OK, there's none), but that's forgivable in a game that's basically a fragfest.  What's not quite as forgivable is the bot AI, which is at its best mediocre.  For example, you can chase after a bot, firing away, only to watch him pause at an intersection so that you can deliver a kill shot to the back of his head.  The bots are supposed to be rated in four areas (accuracy, aggressiveness, agility, and team tactics), but in practice they all play just as poorly.  You'll essentially be a one man army in each match, as your teammates are just as inadequate as the opposition.  You'll be able to play through the entire campaign in a couple of nights, and can quite easily do so without losing a single match.  So, bottom-line, if you're looking to play the game solo, you might want to think twice before you buy it. 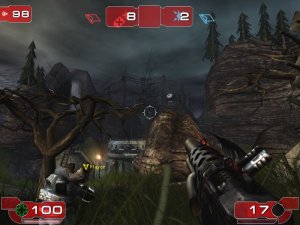 The multiplayer game is an entirely different story.  Unreal Tournament 2003 delivers a fast and exciting online experience.  It's not anything revolutionary or groundbreaking, but that's OK because it sure is fun.  Connecting to a game is easy and is done through an in-game server browser that lets you select a game based on the map, game type, and the number of players in the game.  There are a lot of servers out there and a lot of people playing at any given time, so chances are that you'll be able to find the exact game you're looking for at any given time.

Unreal Tournament 2003 gives you five different game types to play.  The traditional FPS games of death match, team death match, and capture the flag are all here.  In addition, there is a double domination game that features maps with two control points.  A team must hold both control points for ten seconds in order to score.  The last game is bombing run, which is a football inspired game.  There is a single bomb in the game, and each team must try to advance it to the other's goal.  The catch is that the player with the bomb can not fire a weapon.  However, he/she gets to carry a special weapon that allows the bomb to be passed to a teammate.

The game comes with a number of arenas for each type of match, with 35 maps in total.  The maps are large and well-designed, with spacious areas, twisting passages with choke points, and lots of nooks, crannies, and ledges to use to ambush unsuspecting foes.  The arenas are also filled with jump points, elevators, and hidden power-ups to liven up the action.  Even gravity is a map feature, as some arenas are set in a low-g environment that allow you to literally take flying leaps and bounds.

The arenas are not just well laid out, they look fantastic as well with great lighting effects, high polygon counts, and realistic textures.   Most of the maps have a sci-fi feel, but you'll also encounter forest, canyon, and Ancient Egyptian themed maps as well.  The double domination maps also feature scoreboards throughout the arena to help you keep tabs on who owns the control points, which is a nice touch.