If you played The Political Machine 2008, then here's the short form of this review: same game with fewer features and updated issues and candidates. If you loved the previous version and want to be able to give speeches about Operation Fast and Furious and see the number "2012" all over the place instead of "2008", then you should be happy enough with The Political Machine 2012 - although you may find yourself missing the scenarios of the previous iteration. And now on to the long form...

The Political Machine 2012 is a board game styled, abstracted simulation of the whirlwind campaigning that takes place in the heat of the race for the White House. You select your candidate from a who's who list of presidential hopefuls and big name politicians from both parties (or create a fictional candidate of your own), pick your opponent from the other party, and then set out to win the election.

The game is played on a map of the US with bobble-headed caricatures of the candidates serving as playing tokens. Each candidate has a certain amount of "stamina" which translates into the number of actions that he or she can take in a single turn. These actions include visiting a new state to give you a little boost in the polls to more stamina-intensive activities such as giving speeches or hosting fundraisers. The other resources at your disposal include the funds in your war chest and the political capital you'll need to win important endorsements. 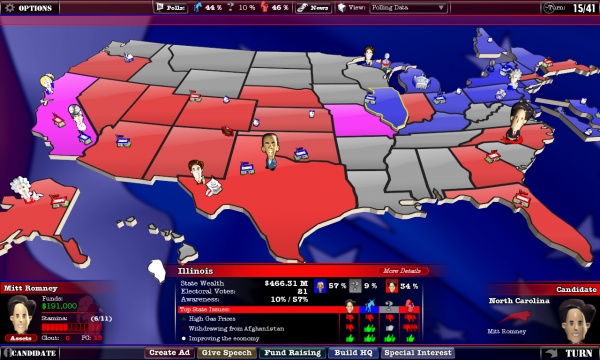 The basic strategies involved in the game are pretty straight-forward - don't waste time in states that you've already lost, hit the high population swing states hard, and use your speeches to tell people what they want to hear. The tricky parts come in knowing where you need to spend your limited time and in making sure that your campaign doesn't go broke before you get to the finish line. The Political Machine 2012 really is like a board game in that there aren't a lot of rules to the game but those few rules make room for a surprising number of different strategies. And those who equate simple with easy will probably be surprised at the tough fight put up by their political opponent at the game's higher difficulty settings.

That being said, after a number of games a feeling of repetition does begin to set in. Although the novelty can be extended by randomizing things like state populations and hot button issues, this is still a game that probably won't stay a part of your regular game rotation much past the actual election in November, which in any case is probably the built-in shelf life of a game based on a single election event.

Perhaps it's that looming deadline of relevance that's only three months off that pushed this game into production before its time. The game suffers from a few bugs, from the occasional random crash to a slowdown issue that has the game slowing to a crawl after you've played a couple of rounds. The last time I played the game the slowdown hit right before the election results came in and it took the game twenty minutes to report the returns. Waiting for the election results to come trickling in was a little too realistic a simulation for my tastes...

Final Rating: 65%. This political machine is in need of a little tune-up.