Wargame: European Escalation does a very good job of simulating company to battalion-level tactical combat in a fictional conflict on the North German Plain. There is a wide array of vehicles and weapons systems for players to select from the time period. A points-based purchase system gives players the flexibility to build their formations one vehicle or squad at a time. Combat is easy to learn with a simplified list of order options and resolution is as expected. The single player campaigns are engaging and challenging the first time through. Multiplayer mode extends the challenge through thinking, human opponents. The casual RTS gamer will enjoy this foray into the Cold War turned hot but the grognard will find it limited.

The game has a simply point-and-click order system. Orders are given via on-screen GUI or keyboard. The key-bindings can be reprogrammed to the player's preference. The major exception to reprogramming is camera panning. In order to pan the camera, players must press and hold the mouse-wheel. I found this uncomfortable and used the panning function much less than in other games where panning is ergonomically easier. What I found most frustrating about the controls was the difficulty in selecting units. Units have a tendency to stack close together and it is hard to select the unit you want. In addition, it wasn't always clear that I had successfully selected the unit I intended. More often than I care to recall, an infantry platoon would level their covered position to move to a fighting position that I intended to send my attack helicopters to.

There are only ten different orders that you can give, some of which can only be given to specific types of units (only helicopters have the option to change altitude for instance). This simplifies the orders process as most of the time you will give orders to move or attack but realism suffers. Unit autonomy is limited to movement to player-designated location and attacking enemy units in range, although drops in morale due to enemy fire will cause units to move away from enemy units. This lack of unit autonomy can make managing units across a broad front difficult, especially when under attack at multiple points. 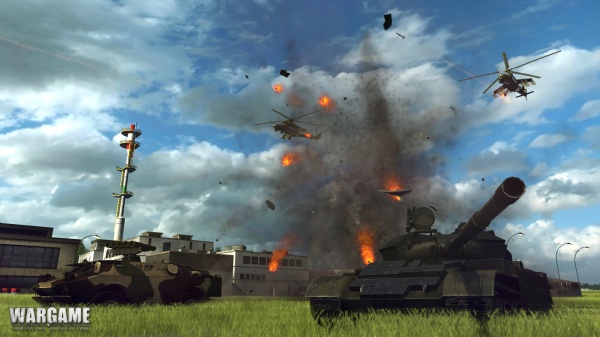 Combat is well executed. Older, smaller caliber weapon systems have trouble killing newer vehicles with heavier armor. Stationary vehicles have a better to-hit chance than moving vehicles. Massing fires from multiple units on a single enemy unit has a devastating effect. However, it takes multiple hits to kill an enemy vehicle, even from advanced main battle tanks like the M1A1 Abrams and the Soviet T-80U. Likely the designers did this to give the player a chance to respond to an enemy attack but the choices are limited to moving or attacking. Units do not deploy smoke to obscure themselves from enemy observing, either autonomously or at player command.

Camera movement can be accomplished either by mouse or by keyboard and is fast, so fast that I found it difficult to make minor adjustments to the camera's position. Zooming in and out is quick with a mouse wheel. At higher levels, units are represented by standard U.S. Army map icons to give a broad overview of the battlefield and objectives. At middle levels, you can see individual vehicles and infantry squads to aid the unit selection and movement/attack process. You can track individual vehicles and zoom down to a third person perspective but I found value of this option questionable since there is little that you can with the vehicle you are observing and you lose focus on the rest of your command. I spent most of the game somewhere at a mid-level view with occasional forays to the high-level view to get an overall perspective and find units.

An interesting feature in the game is resupply. Units keep track of ammunition, fuel and damage. When they run out of ammunition, units no longer fire. When out of fuel, they no longer move. Players have an array of supply trucks and helicopters with which to distribute logistics points from Forward Operating Bases (FOB) or units can resupply directly by moving into range of a FOB. Damaged units within resupply range of a FOB or logistics unit with logistics points will be repaired, including replacing dead infantrymen. I found myself spending almost as much time monitoring and distributing supplies as I did directing combat. 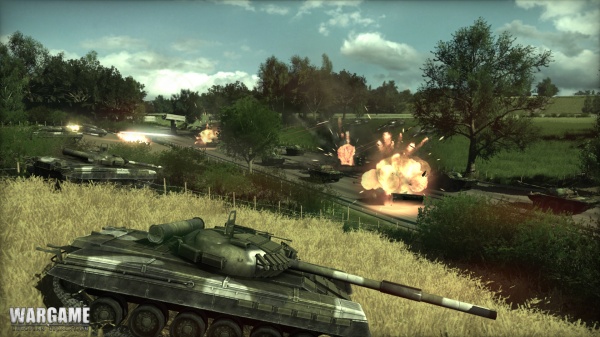 I found one of the most egregious omissions to be the lack of man-made obstacles, such as minefield, wire and anti-tank ditches, and engineer squads and vehicles with which to emplace or reduce them. This omission is interesting as detailed obstacles tied into terrain was a key factor in NATO defense plans and the Soviet order of battle included engineering units at all level.

I was delighted at the number of vehicles and weapon systems represented in the game. The game designers could have easily have limited the equipment to Soviet, German and U.S. forces in Europe but instead chose to include a broader scope with British, French, Polish and East German equipment and variants, including never fielded prototypes like the US-German MBT-70. Initially, you are limited in selection but as you complete single player scenarios and multiplayer battles, are able to unlock upgraded variants and newer equipment. Once all equipment is unlocked, you have the flexibility to create almost any type of formation.

The game lacks a scenario editor for players to create their own battles. In this age of social gaming and player generated content, this omission could ultimately doom Wargame: European Escalation. Without a scenario editor and a method to share player generated content, the value of the single player experience is limited and the long-term success of the game rests with the multiplayer experience.

In the single player campaign, most scenarios begin with the player given a set number of points with which to build their force. As the game progresses, additional points are earned with which to buy reinforcements. You also have the ability to unlock upgrades or newer equipment to purchase during the scenario as opposed to having to unlock all the units that you want to purchase before the game begins. Which is fortunate because once a vehicle or squad is destroyed, you don't get it replaced in the current campaign. 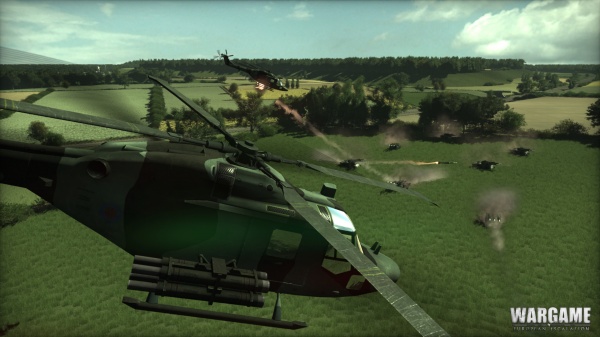 The scenarios are initially challenging, especially if you try to complete all the secondary missions, but after a couple of tries I was able to figure out how to defeat the computer. Replay value is low and I don't expect to return to the single player campaigns once I have completed them. The value of the single player campaigns is to teach you how to play the game and give an opportunity to test different tactics and weapon system combination before venturing into multiplayer mode.

The multiplayer mode allows player to pit themselves against more creative opponents than the single player campaigns can offer. You use points to purchase units from "decks" that you prepare prior to battle and face off in slugfests to see which side can accumulate the requisite number of points first by destroying enemy units. A basic chat function is available but no voice support which would make coordination with your fellow soldiers much easier.

I enjoyed playing Wargame: European Escalation and it whets my appetite for a more detailed tactical simulation of the period. The controls are pretty basic and the simulation simply enough to allow you to jump into the action. The lack of a scenario editor severely limits the long term enjoyment of the single-player mode, so if you have no interest in online, multiplayer gaming, consider skipping this title.

Final Rating: 70%. A solid tactical simulation of armored warfare 1975-1985 whose real value is in the multiplayer mode.