I really enjoyed Borderlands. The graphic comic art style, the synthesis of action-RPG and first-person shooter gameplay, the twisted sense of humor, and the plethora of loot and weapons were among the things that I liked about the game. If you liked Borderlands for those same reasons, then you're going to love Borderlands 2 because it has all of that and it's kicked everything up a notch. I guess you could say that Borderlands 2 is Borderlands turned up to 11.

Borderlands 2 is set a few years after the first game. It also takes place on the planet Pandora, but the frozen wastelands where you'll be spending your time at the start of Borderlands 2 are a far cry from the desert wastelands of Borderlands. Well, it actually looks kind of the same, just with a palette skewed towards whites and blues instead of yellows and browns. Anyway, once again Pandora is a magnet for fortune hunters across the galaxy because another alien vault has been discovered on the planet, this one supposedly even bigger and filled with better secrets than the first. However, these days Vault Hunters have a near 100% fatality rate before they even reach the vault thanks to Handsome Jack. The maniacal Handsome Jack and his Hyperion Corporation own the mining rights to the alien element Eridium that's been found on Pandora, and he's using those rights to close his fist around the planet and monopolize the search for the new vault. Handsome Jack is generally quite efficient when it comes to killing off newly arrived Vault Hunters, but a group of four manage to survive and Jack will stop at nothing to make sure he finishes the job before they find the vault ... or finish him first.

These four survivors are Salvador, Zer0, Maya, and Axton, and together they are the four playable characters in the game (if you feel a pang of nostalgia for the original Vault Hunters of Borderlands, fear not, they manage to make cameos as NPCs in the game). With these four new characters come four new character classes, although a couple of them bear a distinct resemblance to a couple of classes in the original game. The Commando's primary skill is the ability to lay down an auto-turret that in turn can lay down some heavy fire on your enemies, which is pretty much what Borderland's Soldier would do. The Gunzerker can dual wield and work himself into an ammo and health generating frenzy. The Assassin has cloaking powers, as well as the ability to create a holographic decoy to distract enemies. Lastly, the Siren can lift enemies into the air and suspend them there. Borderlands 2 has done away with class weapon specialization, which I take as a good thing because with the diversity of guns in the game it would be a shame having to play through the game trying out only a limited percentage of them. On the other hand, this means that the diversity between the classes is not as pronounced as it could have been - something that is further reinforced by the fact that the game's story is identical for all four classes. It would have been nice to have different opening levels for each class, especially since you don't have access to the characters' unique skills until they reach level five. If you want to try each one out to see which fits you the best, you're stuck replaying the exact same levels until you finally get enough experience to earn the specialty skills. Luckily that's one of my few complaints about the game, and the variety of weapons that you'll find in the game more than make up for the redundant opening levels.

Every battle in Borderlands 2 leaves the landscape littered with dropped weapons, there are weapons vending machines that look like soda machines, lockers packed with weapons and ammo, and even portable toilets that serve as weapons lockers stuffed with some of the better loot in the game. Pandora is practically bristling with weapons, and even more impressive, it's bristling with an amazing variety of weapons. The game randomly generates weapons, not only giving them random ratings in a number of categories such as accuracy, rate of fire, and ammo capacity, but also in adding special features and even altering their looks. I wouldn't be surprised if a big chunk of the game's hard disk footprint was devoted to weapons parts for the game to assemble and reassemble into an almost uncountable number of combinations. There is some order to this universe of weaponry in that the guns of Pandora are created by a number of manufacturers. You'll begin to see certain tendencies within guns from the same manufacturers and probably find that you have your favorites and those whose products you sell without a second thought.

While the variety of enemies that you'll face in the game isn't nearly as large as the weapons, it's still pretty impressive. Different enemies will have different styles of attack, from those who will try to run you down and bash your head in to those who use cover effectively as they try to move to flank you. You'll need to constantly adjust your tactics as you meet different enemies, and manage your collection of weapons so that you're always using the right tool for the job. Weapons that add fire damage are great against some of Pandora's fauna, but you'll want a weapon with acid splash damage when facing armored foes. And that sniper rifle that was so effective against a bandit camp won't do nearly as well as a shotgun when you're being bum rushed by horde of psychos. 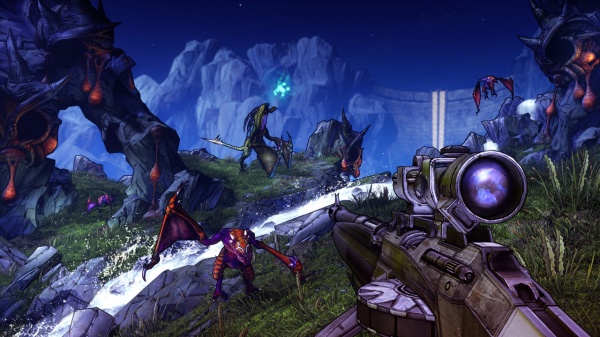 While you'll need to have some twitch skills and be smart about where you try to target different enemies, there's still an RPG engine under the hood in Borderlands 2. Weapons and character stats matter, and you'll see a visual reminder of this as each hit on an enemy will cause a number to pop-up over the enemy to let you know how much damage each hit caused. Character stats and level progression are managed differently than in a traditional action-RPG, though. Leveling up earns you points to spend in the skill tree, which is different for each character class. The skill trees are further divided into three sections that roughly correspond to improving your character's offensive, defensive, or special skills, but that's an oversimplification. The skills themselves are probably more like what most gamers would consider to be 'perks' rather than 'skills', and include things like being able to regenerate health while your weapon's ammo is maxed out.

The other RPG character element comes in the form of the game's Badass Points system. The game is packed with achievements (that are completely separate from the game's Steam achievements) that are earned by tasks such as killing a requisite number of enemies of a particular type, earning kills in unusual manners, or completing a zone-specific challenge. Completing one of these achievements will earn you a Badass point that can be spent on a stat boost such as increased health, better accuracy, or faster shield regeneration, and they stack on top of one another giving them a cumulative effect on your stats. Furthermore, your Badass rank and bonuses are shared among all of the characters that you own, which means that even though a new character must replay stretches of the game that you've already seen, at least you'll get through the early levels faster. On the downside, you're customizing towards one style of play more than you are on a character by character basis.

Vehicles make their return to Borderlands 2, but this time out they seem to be more powerful both in terms of firepower and in the amount of damage that they can sustain. Your basic two-person buggy style vehicles have returned, with one person manning the machine gun or missile turret while the other drives. These can be driven by a single player without losing the ability to operate the weaponry, but you'll only be able to fire in the direction that you're facing. New vehicle designs in Borderlands 2 provide room for four players and for new weaponry like saw blade guns and exploding barrel catapults.

The game is fully playable as a multiplayer game as much as it is a single player game. Player matching is handled through the game's Steam integration, making it very easy to bring your friends into a game. Leaving your game open to strangers to join is another option when you don't have friends playing. Games are hosted on players' machines, so the host's progress through the game determines where in the story you'll be when joining the game. The game scales difficulty to the number of players and to the host player's character's level, so it's best to keep to games within a few levels of your character. 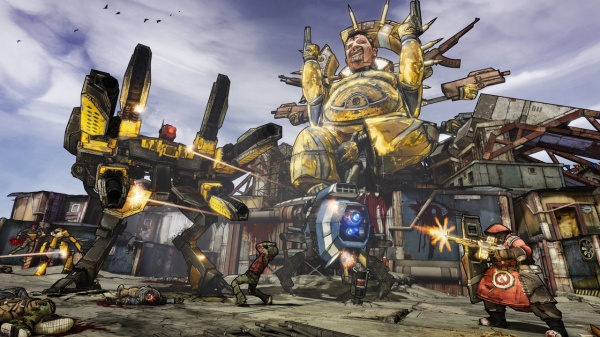 Borderlands 2 sticks to the graphic comic art style of the first game, and while it may not be as novel the second time around it still looks great and fits the game well. The sense of humor prevalent throughout the first game is back again, and overall the game is probably even funnier than its predecessor. Since this is the second trip back to Pandora the writers probably felt more comfortable taking chances and pushing the boundaries a bit more than the first time around, and we the players benefit from this. The moment at which my endearingly annoying robot companion Claptrap fashioned himself a Mohawk out of some animal fur I collected he earned a spot on my all-time favorite robot list. And while we're on the topic of all-time favorite lists, you can add Borderlands 2 to my top games list.