The fate of humanity and the world continue to hang in the balance as Death is brought into the apocalyptic fray brought forth by a mystery power. In this installment of Darksiders you will fight your way through a much larger open world system in an attempt to not only clear War's name, but also to hopefully save humanity. Get ready for a much bigger (and often times better) Darksiders in almost every way possible.

Darksiders II sheds away its previous realm in favor of a more majestic dimension that exists somewhere between heaven, hell, and earth. This allows for tons of open world gameplay with hours of exploring and side quests as you progress through some of the larger missions. New to this edition are a few RPG-like game elements such as a loot system and stat trees, as well as a fair amount of dungeon puzzles that require critical thinking in between all the hack-and-slashing. The storytelling aspect of Darksiders is a thing of beauty, with brilliantly executed cinematics and voice acting to keep you engaged throughout.

Playing a game with God of War-like controls on a PC without a gamepad took a little bit of getting used. I'm not sure if it's just because I've spent so much time on other console systems recently or if it's because some part of me wanted to button mash a controller instead of my mouse, but I will say that even when I was running into more complicated tasks like advanced attack chains and a pesky wall climb here and there, the games response intelligence (going where I think I'm pointing instead of some other random direction the game would like to assume) was always pretty helpful. I think both control types are easily manageable, especially if you're primarily a PC gamer (and if not, why are you buying this on the PC?). Will a gamepad makes things more fun? For me, the answer is yes (I used a controller through parts of this review). But for you, there's only one way to find out. 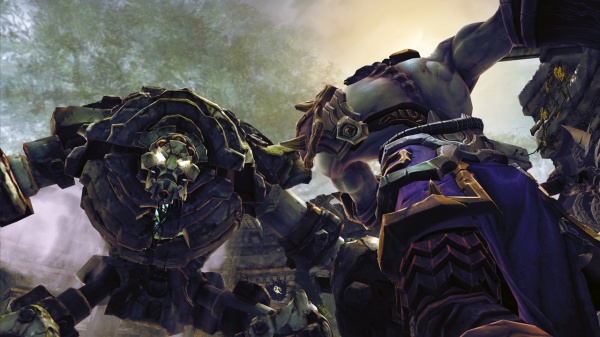 As of this writing I'm in kind of in a love-lukewarm relationship with the graphics in Darksiders II. Like I mentioned earlier, the parts of the game that have a story to tell really seem to shine and I do enjoy the effort put into the seemingly endless array of characters and weapons, there's just something about a number of them (and the world they exist in) that feels unpolished. It could be that I just don't have as high-end of a gaming rig as I once had and my playthrough was on a lower setting. Or maybe that's simply the look that goes along with the style of a big open world game like this. I'm willing to concede to both if they are true, but if you're a stickler for the most unfortunate of details like I am, then the warning is out there. It should also be noted that this was pretty much my only gripe with the visual aspects, and I can't imagine most people will spend as much time analyzing every visible pixel.

Darksiders II brings in a decent cast for the audio assets of the game, carrying what I think is a pretty strong musical score and some well scouted voice actors. I think the only area that felt a little off to me was the scripting for Death. For a character that is built up to have such drive and confidence, he often comes across as a little bland. Dare I say it, but Death seems like kind of a killjoy, and not in the ironic way you'd expect. However the voice acting behind him (like most of the cast) is executed really well, making it difficult to really pick any bones in this area.

So all things considered, how does it stack up? Well let's get the most obvious out of the way, Darksiders II is MASSIVE and well worth the asking price on content alone. The story is going to take you somewhere in the neighborhood of 20 hours to complete (if you're really good or play with noob settings like I do). Add another 10-20 hours or so if you want to complete all the side quests and/or revisit areas in Game+ mode (where items become available only on your second playthrough). There are a few things I griped about in this review, but as I noted with each one, they are quite minor in terms of overall experience. If you were an early adopter of the game, there is no doubt that it came with its fair share of bugs, most of which have either been squashed in the first few weeks of release or are acknowledged and actively being worked on by the developer. Being a fan of almost every genre this game has smashed together into one has made it highly enjoyable, and the ending had me hoping that the next installment (should they choose to make it) gets in the development queue soon.

Final Rating: 96%. The fate of humanity and the world continue to hang in the balance as Death is brought into the apocalyptic fray brought forth by a mystery power.