It some ways reviewing a monster game like Call of Duty: Modern Warfare 3 is a thankless duty. Besides being one out of a million reviews on the game, many people will already have a pretty strong opinion about the game. So either I reinforce gamers' opinions or gamers will think I'm an idiot for not agreeing with their ideas. It's very unlikely that anyone will be swayed is what I'm saying. So why bother? I have one other handicap reviewing this and it's that multi-player games are not my favorite, I'm still a single player gamer at heart. But being the professional reviewer that I am I'll sill move forward and give an honest review.

Modern Warfare 3 (MW3) really must be reviewed in two parts; one focusing on the single player campaign and one for the multiplayer. Let's talk about the single-player campaign first. Honestly, you're not going to be doing much new if you have been keeping up with the series. You will play from the point of view of several different characters in several different locations from around the world. I've played MW1 & 2 and I have to admit that I really have no idea what is going on story-wise, at least not the details. Sure I got the general idea of a bad guy that just wants to watch the world burn, but I really get confused who's who and what they did or didn't do in the first couple of games. There are some familiar names like Soap, Frost, and Price but after that it's all just noise to me. But it's a very loud noise to be sure. And really, I'm not too disappointed in my lack of ability to figure out what exactly is going on. I mean some of the best action movies around are more than a little flimsy when it comes to plot. I don't watch an action movie solely, or even mostly, because of plot; I watch because I want to be entertained, I want to be thrilled, and I want to see something I wasn't expecting or at least something really cool. So think of MW3 as a playable action movie and I believe MW3 understands this and it doesn't spend a whole lot of energy trying to catch you up on what happened in the first two games and really doesn't even try all that hard making sure you know what's happening in this game. It knows why you're playing; you want to shoot things, blow up things, ride things, and see some really cool stuff happen. And with that in mind it delivers.

In the past games I had problems at times figuring out where I was supposed to be going and would end up wandering around hoping to see an arrow of some sort pointing me in the right direction. I'm pretty sure one of the characters would be yelling at me telling me to do something but I was still a bit lost. Not so much on MW3. While I suppose I could have wandered off to look around or whatever, the level designs pretty much kept me on track to where it wanted me to be. Basically it did a really good job of leading me to exactly the right spot without me noticing it was doing that at first. I can see where gamers will be split on this being a good thing or not. I kind of liked it, but have to admit that it did seem to be a tad too much hand-holding. But it's war after all and who am I to turn down a guiding hand? 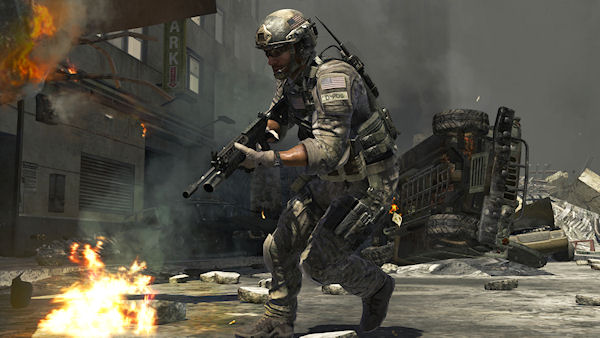 Even without knowing exactly what is going on with the story there is no doubt that the experience is exhilarating. The sense of urgency throughout each level is intense and can get your heart racing without really knowing why. A few of the levels are absolutely thrilling. Well maybe not quite the whole level but some of the scripted moments are really memorable. A few that come to mind right off are the fight around the Eiffel Tower in Paris, a sometimes weightless gunfight in an airplane, and the battle for New York harbor. All of this said, we have seen it before and there isn't anything really new in terms of gameplay.

Many gamers view the single player campaign as nothing more than a long tutorial for the other part of MW3; the multiplayer. They have refined and tweaked the multiplayer to the point of it being very good. One thing I am happy to see changed is the kill-streak bonus; it has been replaced with point-streaks. Kind of the same concept but now you can get points to earn things not just based on the number of kills but also on completing objectives or even assisting in kills. It adds more to the spirit of teamwork.

As I mentioned multiplayer games are not my favorite, mainly because I suck at them. I really don't find it very fun to be consistently pwned especially from some sort of super weapon that I can never get enough points to get my hands on myself. MW3 seems to take gamers like myself a little more into account, first with the new point-streaks and also with the ability to gain levels a bit quicker than in the past. You'll be unlocking weapons and other items after just about every round at the beginning, which gives folks like me a reason to continue.

The maps in general seem to be better constructed, but maybe that was just because I was actually getting in on the action more than I was just being a target for everyone else. There was a map in a Russian mall that I liked a lot. I also found the Kill Confirmed mode fun. In that mode you need to actually pick up the dog tags of a killed enemy before that kill would actually count for your team. You can stop a kill from being counted for the enemy by snagging the dog tag of a fallen teammate before the other team gets to it. I have to admit that it was neat seeing one of my teammates running to my body to deny the kill ... somehow it felt like teamwork.

There is also a co-operative only Spec Ops mode. One mode in this is you and a buddy just trying to survive wave after wave of baddies. Simple and fun. The other mode is kind of a greatest hits version of the campaign. It's a different challenge than the single player game and in many ways more satisfying to complete with someone than by yourself.

Graphically it's not a marvel as it's using a engine that's a few years old, but this also means that they have worked out most, repeat most, of the bugs. It's not a bad looking game by any stretch and can be played on lower spec machines, which is a good thing to me. The sounds are really good with some great gunfire and explosions going down. The voices are hit and miss, but good enough to keep you in the moment.

Final Rating: 82%. In MW3 you know what you're getting and, yes, that's exactly what you get.