So I'm sitting here on my couch drinking a Coke after the Miami Dolphins just beat the New York Jets (Go Fins!) and thinking about how much I hate the Jets, love the Dolphins, and what I'm going to write for my Saints Row: The Third review. I hate the Jets, the thought of them makes me unhappy. By contrast, I love the Dolphins and they make me smile. The newest version of Saints Row falls into one of those categories: grrr or smile. Read on to find out which way it goes.

In this third outing for the Saints Row franchise we finally don't have to make any real comparisons to GTA as the Saints are now able to stand on their own as a different gaming experience. Indeed Saints Row: The Third knows what it wants and it just goes right about doing it. And what does it want? It wants you to play the game with a big goofy grin on your face all the while wanting to have someone close by so you can constantly keep saying to them; "Dude, did you just see that!? That was awesome!" This is the most polished entry in the series and the most entertaining. There are some issues but most are not significant enough to really effect the fun. 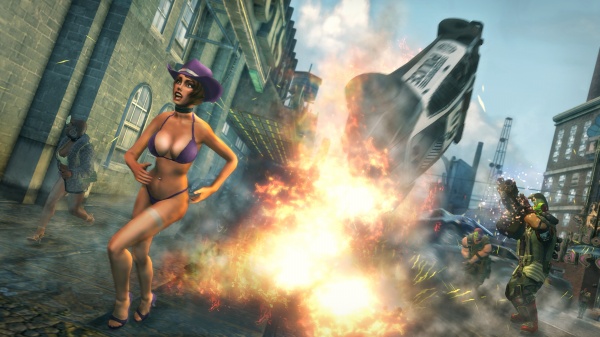 If you haven't played the previous games there are going to be a bunch of inside jokes that will not make sense to you. Certainly gamers that know the Saints history will get a little more out of it but, really, the story is secondary to the mayhem. Basically the Saints have become household names and endorsers of a variety of items. I suppose in a way it shows that crime does pay. You play in a new city called Steelport and you come in as a fourth gang in the city but you will quickly start climbing to number one. The story is basically just a way to get you from one action scene to another but those scenes are wacky and fun. The originality of the missions wanes near the end, and while unfortunate, that's actually understandable considering how over the top everything is...it's hard to keep that going for an entire campaign unless you stay in development for an additional year.

It would really be a disservice to describe the missions in Saints Row because part of the enjoyment is the surprise of what's next. I will say that you won't be stuck doing the same old thing, or not in any recognizable way. That is, even the "traditional" type of missions become something very different once you add the Saints sauce. Expect the unexpected is a rule. You will have access to an insane variety of weapons and character customization. I spent hours, probably too many, running around the game naked and just as much time running around in a bunny suit. People more or less treat you the same, naked or furry, it's all the same to them although there is an award for streaking. 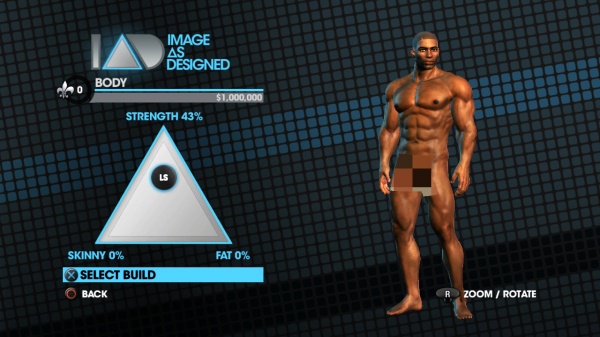 Technically it supports DX 10 and 11. I have a mid-level laptop and often saw the frame rate drop to unacceptable levels that seriously affected gameplay even on the lowest settings. There were several setting for those with more powerful rigs to fine tune the experience, but for me it I needed the lowest and even then it was a bumpy ride.

Final Rating: 88%. Saints Row: The Third certainly proves that the third time is the charm if your system is strong enough.