While the original Torchlight had the advantage of channeling Diablo in a still Diablo III free world, the sequel doesn't share that benefit. Hopefully that doesn't mean it will get lost in Diablo III's enormous shadow, because Torchlight II is a thoroughly enjoyable game in its own right. And it doesn't really matter what you think of Diablo III and its rocky launch, if you enjoy action-RPGs at all it's hard to imagine that you wouldn't like Torchlight II. From its endearing art style to the bounty of loot to be found to the seemingly endless menagerie of imaginative beasts and enemies you'll face, Torchlight II delivers an amazing amount of thoroughly addicting gameplay.

Like all action-RPGs, your experience with Torchlight II begins with your selection of your character. There are four classes in the game, Outlander, Engineer, Embermage, and Berzerker. The Berzerker and Embermage roughly fill the roles of the warrior and magic user archetypes, while the gadget-using Engineer and the gun-crazy Outlander seem to channel steam punk more than they do Dungeons and Dragons. To try and pigeonhole these classes would be unfair to Torchlight II, though, because a lot of thought has obviously gone into designing character classes that are far from generic and interesting to play. My character of choice was the Outlander, who backed up his prowess with ranged weapons with magical spells that slowed enemies and did damage over time allowing me to keep enemies at range while I peppered them with gunfire from a safe distance.

The character classes do more than provide a unique solo experience, they are designed to work together and complement each other's skills when you play the game in multiplayer mode. This leads to one of the things that I really like about Torchlight II, Action-RPGs of this nature require plenty of mouse-clicking to defeat your enemies, but Torchlight II never feels like a random click-fest. You need to know your character's class' strengths and weaknesses - as well as those of your enemies - to succeed. Walking into a mob of monsters and furiously clicking is more likely to lead to your death than that of your enemies. And this is not something you'll have down pat within the first hour of gameplay, either. The game's world is packed with an amazingly diverse array of things that want you dead. I felt that I was constantly facing new foes and having to adjust my tactics to meet each new threat.

The diversity you'll find in Torchlight II's world's denizens extends to the world itself. The game's lands, caverns, and dungeons are all randomly generated, so your view of the Torchlight II world will be different from that of every other player's, as well as a new experience for you every time you begin a new game. Randomly generated maps are nothing new, but Torchlight II does it so well you'd swear that every stone was carefully placed by a meticulous level designer. And it all looks fantastic, perfectly suiting Torchlight II's unique art style. 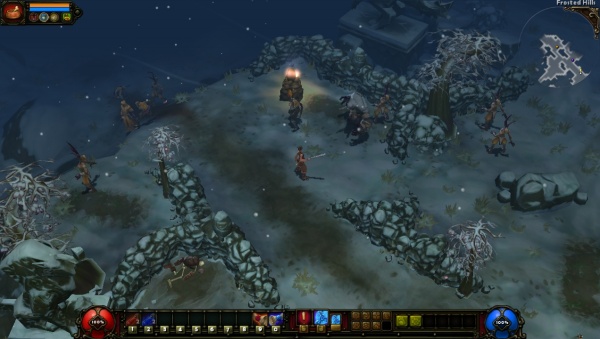 That art style extends to the game's weapons and armor as well. The diversity of weapons and armor in the game is in and of itself impressive, but even more so is the diversity of their styles. My Outlander could choose to wield pistols, shotguns, rifles, hand cannons, and more, and not only could I tell each apart with ease at a glance at the inventory screen, I could even tell which ones were the higher quality weapons. And the game's rarer and unique items have their own artwork, making them truly unique.

In Torchlight II you'll also have a pet who will serve as your faithful companion on your adventures. Your pet is a big help when it comes to managing all of the loot you'll acquire from your hard-fought battles, not just because of the extra inventory slots but because you can send your pet back to town on its own to sell your excess items. You can even give it a basic shopping list of things to bring back - a very useful thing when you find yourself far afield and short on health potions. I also liked that your pet could share in the loot grab, equipping stat-boosting collars and tags. What's really cool, though, is that you can find fishing spots, drop in a line, and try to hook a few fish. These fish can then be fed to your pet, with each type of fish bestowing a different benefit. Some can transform your pet into a bigger nastier creature while others can give it the ability to cast spells in battle. I loved coming across a new fishing hole and seeing what new powers I could bestow on my pet.

If the game has a weak spot, it would have to be in its story. The story's not really bad; it's just that it's pretty much your standard fantasy fare. So much of Torchlight II's world is engrossing it would have been nice if there was a whole mythology to match it. 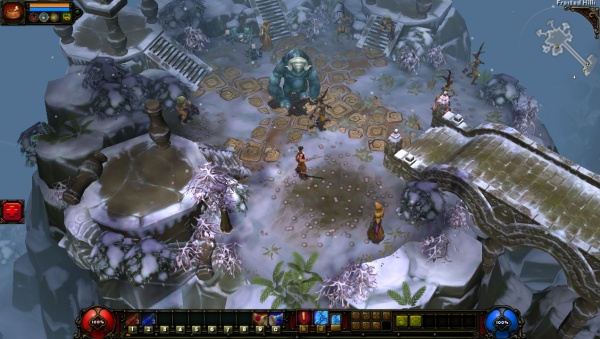 Unlike its predecessor, Torchlight II supports multiplayer play, both on a LAN and over the internet. You'll need to register for an account with Runic before going online, but it's free and the registration process is pretty painless. Multiplayer games run smoothly and support drop-in/drop-out play. The game scales the difficulty to the number of players (up to six are supported), so teamwork is a must in multiplayer games.

Torchlight II is one of those games that may not be innovative on the whole, but that just gets so many of the little things right. Sure, it's a point-and-click action-RPG in the traditional mode, but it knows how to tap into everything that makes these types of games fun to play.

Final Rating: 92%. It's everything that you love in a classic action-RPG.