People are always shocked to find out that I'm not much of an anime fan. My massive Dragonball collection (and obsession) seems to suggest otherwise, but Dragonball and Dragonball Z are really the only two anime/manga I have any real connection to and love for. It's not that I dislike other anime, I just don't find it to be my cup of tea most of the time. So it was out of character when I announced I'd be forgoing regular television for a night to watch a few episodes of Attack on Titan in preparation for this review. With a few episodes under my belt and the new 3DS title played through, I can do more justice to the game and the review than if I went in with no knowledge, proclaiming the colossal titan to be a grown-up version of Inside-Out Boy from Nickelodeon. Background knowledge or not, I feel like Attack on Titan: Humanity in Chains falls just short of how good I wanted the game to be.

If you don't know, Attack on Titan is a newish anime series that got a lot of attention over the past few years for its crazy premise and unforgettable opening sequence and song. The story follows Eren Jaeger, a boy living within a triple walled city containing the last vestiges of humanity, and opens with the ever more recognizable colossal titan attacking the walled city and breaking through. In the future, see, humanity as we know it has been all but wiped out by the titans; enormous, sexless, braindead humanoids who amble around and eat people when they find them. The colossal titan breaking through the outer wall signifies a new beginning to the titan's aggression, the possible end of the human race and is the catalyst for the entire Attack on Titan narrative. It's actually a really cool, fresh setup and the animation is top notch, especially the battle sequences. If you are interested, you can watch the first two episodes of the series through Nintendo's eShop for free, or much more than that on Netflix, Hulu, etc. 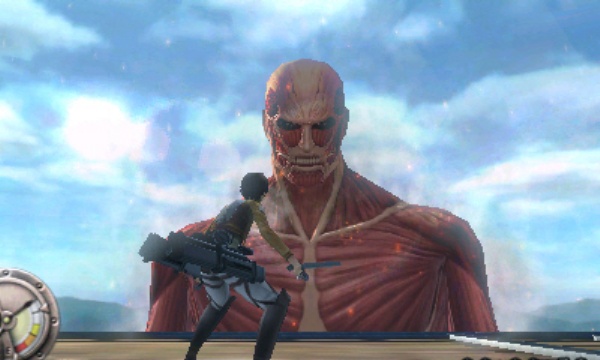 The game follows exactly the story from the anime, with a few liberties taken to facilitate the game side of things over the plot. You start off only being able to play as Eren, but eventually you'll unlock four other playable characters, each with their own set of missions to complete. Humanity in Chains' tutorial coincides with the colossal titan's attack and the following three years, in which Eren joins the military force that protects against titans with his squadmates. From there, you'll be tasked with defeating titans and completing missions that move the plot along. The problem is that the missions don't ever really feel fun and the plot takes a backseat to the gameplay, making the game feel more like completing a checklist than following a story or enjoying the action. This changes as you progress further into the game - more on that in a minute - but even cutscenes lifted directly from the anime can't make me feel like the intriguing plot didn't get as much attention as it should have. Don't misunderstand; this isn't like One Piece: Romance Dawn on 3DS, where you would need to have gotten a masters in One Piece history just to follow along. Let's put it this way - I followed the story no problem until it progressed past where I had watched the anime, and past that I was all but lost. For a story as strong as that in Attack on Titan, I still feel like an opportunity was missed.

The story taking a backseat wasn't enough to deter me from playing through the game, though; it took about 10 hours to finish all the missions and open up World Mode. I'll get to that in a minute; let's talk about how the game is played first. As you might imagine, you'll spend a lot of the game, most of it actually, just fighting the titans, but taking one down is no laughing matter. You'll need to use your grappling hook backpack... apparatus... I can't remember exactly what it is called... and swords to attack the titans' feet before going at the nape of their necks - their weak point. Different titans can take more punishment than others, so you need to approach each battle with caution. As cool as it is at first, swinging over rooftops, aiming spinning attacks at titans, it gets old pretty quickly. Each encounter is basically the same - grapple to a titan body part, hit X, hit X again when two meters line up (tough to explain, easy to do) for a critical hit, rinse and repeat. That sequence of actions is the meat of the gameplay, and I imagine most players - even the biggest fans - will tire of the same thing over and over before the real meat of the game even opens up. 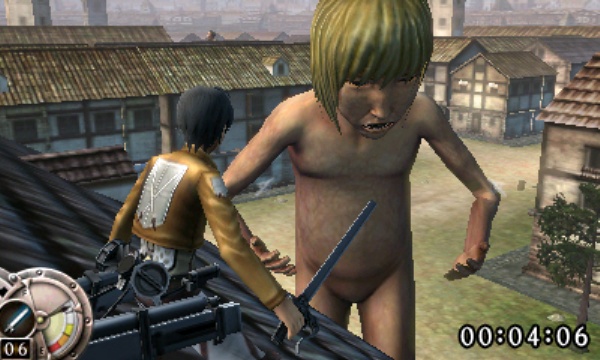 Ok, let's discuss World Mode - finally. Even with no knowledge of this mode going in, the intro and song that play when you start up the mode should be convincing enough that you are about to experience something awesome. Here, you can create your own character (!), choose different weapons (guns!) and go into missions that are much more free-form than the somewhat restrictive ones in the main story. There are still objectives and even time limits, but the whole thing feels more open, and the game is definitely better for it. This is also the mode that allows for online play with others, which provides some fun but doesn't seem all that much different than playing with computer controlled opponents. The real draw is playing as your own character with a little more freedom and leveling and building that character through some light grinding. But again, this may not be enough to keep players interested past the same methods of killing titans over and over and over.

As I said at the beginning, I feel like this game could have been so much more. The same attack patterns and methods for killing titans wears thin pretty quickly, which is a shame because the World Mode can be so much fun. Still, the whole package is a missed opportunity to capitalize on what should be a no-brainer for an action game. As much as I've uncharacteristically enjoyed the anime and love the cutscenes and songs, I really can't recommend the game to anyone beside the hardcore fanbase, and I suspect even they will run out of steam long before they've finished everything. If a sequel is made - and I genuinely hope that happens - maybe varying up the gameplay a bit or loosening the restrictive mission structure could go a long way to making the game more enjoyable. Attack on Titan: Humanity in Chains isn't what it could have been, even with such a solid foundation to build on.