One of the most gratifying parts of reviewing games is getting to share good news. No, not like the Jehovah's Witnesses, but the good news that an anticipated game is as amazing as everyone hopes it will be. It's even better when you have time to play and complete a review copy before the game hits stores. That gratification is what will make writing about Sega and Atlus' new SRPG Stella Glow so rewarding. Stella Glow hits all the right notes (music pun... groan) across presentation, gameplay and overall experience, and now, just after my 60 hour first play-through, I'm ready to name the game as my 3DS RPG of the year. Erase any doubts you may have; Stella Glow is even better than you hoped it would be.

Stella Glow starts with an opening so clich�d it is almost presented as a joke. Alto, the main character, has been the resident of a small town for three years and lives with Lisette, a terrible cook, and her mother. Guess what? He has amnesia, erasing his memories of everything before his washing up in town. The Witch of Destruction, Hilda, and her lackey, Dante, show up in town, magically transforming its citizens into crystal. After a short skirmish, Lisette inherits the powers of the Water Qualia, from a pendant Alto woke up wearing, and becomes a Water Witch. Thus begins Alto and Lisette's quest to un-crystalize their hometown. You don't have enough fingers and toes to count the amount of times we've seen this exact setup over the years.

Thankfully, the story picks up shortly after this point, and sees Alto and Lisette join the knights of the 9th Regiment. The quest becomes tracking down the three remaining witches - Fire, Wind and Earth - to combat Hilda and set things right. Recruiting each witch comes with its own mini-plotline, reminiscent of Mass Effect 2's quest to build a team to fight the Reapers. These three stories drive the first 75% of the game, with the wrap-up occupying the last quarter. The story is well told and is mostly driven by the characters you'll meet, all of whom are perfectly fleshed out and instantly memorable. The fantastic development of these characters forces the player to empathize with them all, and makes a mid-game twist as surprising as it is devastating. The plot may start with as hacky a setup as you've ever seen, but the character-driven tale quickly becomes one of the most involving and entertaining I've seen in a while.

Author's Note: Stella Glow recently published a demo on the Nintendo eShop that features the game's beginning as I described it two paragraphs ago. If you judge the game's story by the setup found in the demo, you'll be making a huge mistake. Things don't get remotely engaging until immediately after the point at which the demo ends, which makes me question the wisdom behind releasing the demo at all. 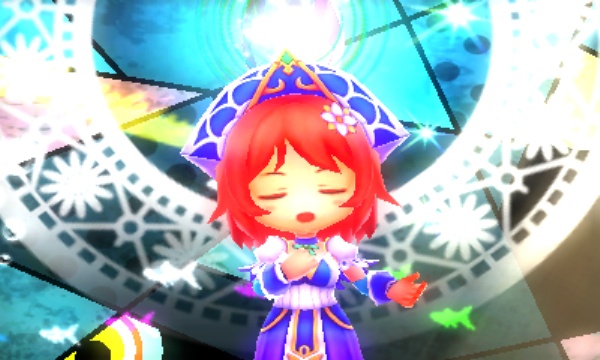 When it comes to how the game looks and sounds, Stella Glow is nearly as successful as it is in the story department. In a game that has a plot tied directly to music (witches are the only beings that can sing, and their songs are the magic of the game), the soundtrack is absolutely amazing. The songs, complete with vocals, are entrancing and beautiful, and even the background music is great, too. The game also features A TON of voice acting, with most of the character interactions fully voiced in English. As good as the English voice actors are, I really wanted the ability to play with the original Japanese voice track, an option that is woefully absent. This can be vexing as the songs remain in the original Japanese (with the exception of the opening theme), creating a weird disconnect between the voices and songs. On the bright side, this complaint is pretty much the biggest one I have with the overall game.

Stella Glow also scores big points in the visual department. If you ever played Jeanne D'Arc on the PSP, you'll see how similar the two games are graphically. The battlefields are colorful and your units are well animated, with cutaways for their special attacks and moves. In battle, the characters are presented as "chibi" versions of themselves, while they appear normal in cutscenes and dialogue segments. I could see some gamers not being pleased with this move, but it really adds to the overall charm, and Stella Glow has charm to spare. The game also features some fully animated cutscenes, but there aren't as many of these as I would have liked. Still, the ones we do get never fail to impress.

The similarities to Jeanne D'Arc continue through to the way Stella Glow plays. Players choose 6-7 from the eventually available 15 characters and move them strategically around a grid-based battlefield. Each character has strengths and weaknesses and play completely different from one another. Alto is your good, all-around attacker, while Archibald is your slow but powerful tank and Rusty is your quick thief. The most dynamic characters, though, are the witches. As the only characters that can use magic, they will make it onto nearly every battle map you intend to win. They attack with normal weapons as well, but their songs are the main purpose for deploying them. A little further into the game, you gain the ability to "conduct." This involves placing Alto next to a particular witch and unleashing a join move, which can heal your team's HP/SP, disable enemies or cause massive damage. These conducted powers become essential in the game's later stages, and change up the SRPG formula in interesting ways. Positioning is nothing new to SRPG fans, but the witches' magic, songs and conducted powers add that little extra something special to an already strategic adventure.

When you aren't in battle, the game takes on a more visual novel style. You will have lots of dialogue to read or listen to between battles, and this could have been disastrous in interrupting the flow of the game's SRPG action. It succeeds because of the story's depth and ability to connect with the player, and these long strings of reading/listening never become tiresome or tempt the player to skip through them. You can skip through them, but you won't want to, I promise.

That isn't to say that the game goes on auto-pilot when not in battle. You have the hub capital city of Lambent situated on an ever-expanding world map, and you'll have plenty of choices in exploring both. Lambent offers a gear and weapons shop, an orb shop and craft studio, the ability to take on small jobs for cash and, most importantly, the Knights Barracks. Bianca's gear shop is self-explanatory; it's where you buy gradually better weapons and armor, as well as items for use in battle. The orb shop and crafter sells trinkets that can be inserted into weapons for all kinds of effects, from elemental attacks to buffs to powers that can change the outcome of a fight instantaneously (my very favorite is one that allows a character a second turn if he/she defeats an enemy). You can also craft orbs here, combining lesser orbs with found fragments for more powerful versions of themselves. The side job system is mainly superficial, as you simply select a job, watch the scene and collect some money at the end. The Knights Barracks is where you'll spend most of your time in Lambent; here, you select from your team members for short interactions. This works like it does in the Persona or Fire Emblem games, where interacting with your team raises stats and unlocks new powers or attacks. Choosing the right members to chat with directly effects the ending you will earn, so you'll want to make sure you spend any free time conversing with the right people. Also, maxing out your interactions with the witches allows for late game power boosts, some of which you'll absolutely need to succeed in the final encounters of the game. It isn't the deepest social system I've seen in an RPG, but it works fabulously in the context of this game and makes it more than just fight after fight after fight. 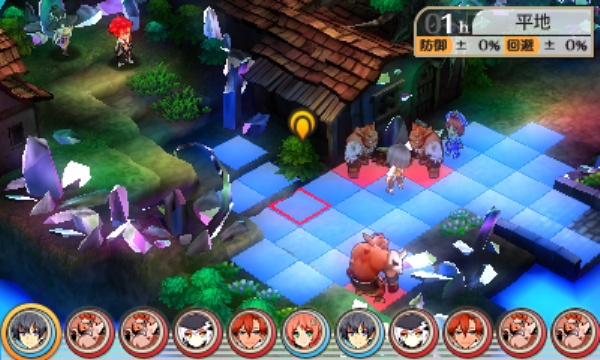 If there is one thing some SRPG fans love, it's grinding levels. Stella Glow does allow for this style of play as well. Whenever you have access to the world map, you can choose to fight skirmishes outside the storyline, just to raise stats or earn money. Though you can beat the game without much outside level grinding, I enjoyed the battles enough to fight a good number of these optional encounters each time they were available. Also found on the world map are special battles that are unlocked by using 3DS play coins. I fought a number of these battles, though I never was able to figure out how they were any different from the normal free fights. Still, I always enjoy games that bring play coins into the mix.

Speaking of grinding, you need to know that Stella Glow doesn't have a high challenge level until about halfway through the game. The first half can be breezed through with almost no chance of failure. I didn't lose a map until I was well on my way to recruiting my third and final witch. Even after that, the game remains somewhat easy until the final 3-5 maps, which require a lot of planning and skill, and a deep understanding of the characters at your disposal. It took a few tries to bring down the final boss, though it never felt unfairly difficult. If you are looking for an extreme challenge, you won't find it in Stella Glow.

Finally, finishing Stella Glow gives way to a new game + option, which allows players more time to max out their conversations in the Knights Barracks and finish the game with all conversations 100 percent completed. Also, depending on which ending you earn, you may or may not have recruited a 15th and final character in the game's ending stages. I did earn her help on my first play-through, but if you don't, getting her in your party is a nice motivator, in addition to the true ending scenes.

If it isn't obvious, I was and am completely under Stella Glow's spell. I love the characters and story, the graphics, the music, the gameplay... all of it. If it isn't clear, I'll explain how much I liked Stella Glow in terms every gamer can understand: While I was playing through to review the game, I received Fallout 4 in the mail early for review. I didn't even take the plastic off the game until after I'd finished Stella Glow. It really is that good. Every 3DS owning RPG or SRPG fan needs to give this game a look, as I can't recommend it highly enough. Here's my good news: Stella Glow is definitely the best 3DS RPG of 2015.

Final Rating: 97% - We give Stella a glowing endorsement.