I have to admit it right off the bat - I was starting to feel a bit burned out on Etrian Odyssey. After the excellent, but slower-paced Persona Q crossover title, the Ok but not great Etrian Mystery Dungeon and now Etrian Odyssey Untold 2: The Fafnir Legacy, I'm starting to feel as though a solid fraction of my total game time for 2015 has been spent with the franchise in some form or fashion, and this is after Etrian Odyssey IV and Etrian Odyssey Untold ate up so much of my time last year. So diving back into the map-drawingest, gamer-frustratingest franchise in the west (say that in a Yosemite Sam voice for full effect) took some self-cajoling, but, like (almost) always, I'm extremely glad I let myself get swept back up in the Etrian wave; Etrian Odyssey 2: The Fafnir Legacy came from behind to become my favorite in the series, dethroning previous champ Etrian Odyssey IV.

If you don't know, Etrian Odyssey Untold 2: The Fafnir Legacy is a remake of the original Etrian Odyssey 2 from back in the Nintendo DS days. But that game and this game, if you have been with the series since the early days, can be viewed as either the same thing or completely different. You now have the option of playing through the same basic game with a well-told story, interesting characters and snappy dialogue to keep things moving, or simply going with the original structure of dungeon after dungeon, with grinding and map-drawing for grinding and map-drawing's sake. If you can't tell, I'm a big fan of the addition of a story to these games. It may inflame the hearts of purists and old-school RPG fanatics, but the narrative makes a niche RPG a more mainstream one, and whereas I could never force myself to finish Etrian Odyssey 2 on the DS, I happily tore through Untold 2, more to enjoy the story than to wallow in the complex and sometimes unforgiving gameplay. That is high praise, especially considering how much of this same stuff I've dug through these past 6-9 months. 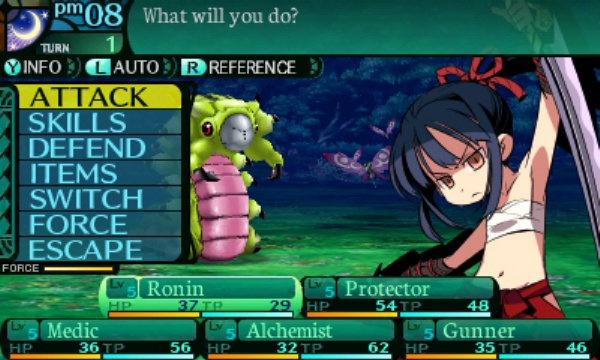 Speaking of making the game more mainstream-friendly, two more aspects really drive the point home and put this in the running for 3DS RPG of the year - the animated cutscenes and the choice on difficulty. First, the animated scenes, which make a bigger difference here than they would in other games. They solidify the presence of an actual story and really help make it feel legitimate, beyond just being beautiful to watch. For a series that used to wear its lack of a narrative like a badge of honor, it's great that they've reversed course enough to make the game feel closer to an RPG everyone can enjoy, not just the pencil-and-paper D&D enthusiasts from years ago. Further adding to the refreshed feel is the ability to not only relax the relentless difficulty, but to also change the game's difficulty at any time with little penalty. Enjoying the game but you keep dying? Turn down the challenge. Breezing through and want a little extra teeth in your encounters? Turn up the difficulty. Both these may seem like small things when viewed through the scope of an 60-100 hour RPG, but both made a real difference in my enjoyment of, and drive to keep playing, the game.

Being that the gameplay is all but unchanged from previous entries AND the fact that this is a remake of a somewhat recent title, I talked about those changes and updates before I got to the game itself. Well, let's hit that aspect now. If you've never played an Etrian Odyssey title before, and you've had PLENTY of chances, here is how it breaks down. You and a handful of team members of different classes dive into first-person dungeon after first-person dungeon, each of which are laid out on a grid. Every step represents a turn, so enemies move only when you do. You hit random encounters (unseen enemies) and larger enemies, which you'll want to avoid at first, as you move around the map, looking for the exit and any treasure along the way. The wrinkle here is that you'll need to have stylus in hand because as you move through the dungeons, you'll need to use the 3DS touch screen and the provided tools to draw yourself maps of everywhere you explore. For me, this part is as much fun as the exploring itself as seeing a completed map really brings with it a sense of accomplishment, but it can be a tedious chore for those who don't play amateur cartographers in their spare time. This is very old school dungeon crawling gameplay, but the fresh coat of paint, the story and the new cutscenes keep this from being the niche title so many other Etrian Odyssey games were correctly classified as.

I mentioned before that this game unseated Etrian Odyssey IV as my favorite in the series. Why? I only mention this to drive the point home, but it was the story. Etrian Odyssey IV was the first EO game I'd played where the narrative actually mattered, so seeing the change elevated the whole game. But here, with Etrian Odyssey Untold 2, we see the series take the next real step, into telling a story that not just holds the gameplay together, but inspires it to be something better than a dungeon crawler with some actual named characters. Over the course of this game, you'll actually come to really care about Flavio, Bertrand and the rest (maybe not Chloe... haha), and that can and should hit series the faithful like a sack of hammers. Etrian Odyssey Untold 2: The Fafnir Legacy expertly takes a niche title, adds content and some mainstream-friendly but not obnoxious options and comes out the other side as an RPG so many more people will enjoy than its original version. If this is the direction further EO games are going to go, then I don't see myself getting truly burned out on the series anytime soon.

Final Rating: 94% - We have a new champion in the Etrian Odyssey series.