It's been a while since I've felt outright anger at a video game. Let me set the scene: It was Friday night, the house was quiet and I had a brand new 3DS game to play and review - Tenkai Knights: Brave Battle. Sure, I'd read reviews that raked it over the coals, but the premise seemed cool enough; little LEGO-ish robots that transform and fight evil in a Power Rangers-style team of four. The back of the box promised customization of my own Tenkai Knight and plenty of enemies and bosses to fight. It couldn't be all bad, right? Wrong. Tenkai Knights: Brave Battle is among the worst and laziest 3DS games I've played, and my system log tells me I've played 229. The worst part is that it deep-sixed my Friday night.

I took the game for review based on what I knew of the television series. I've already described it as a Transformer/LEGO mashup with hints of Pokemon or Digimon (kids find x, have crazy adventures with x), and the toys seem pretty interesting. Having no knowledge of the show's plot and premise did me no favors; even after playing the game I still have almost no idea what the hell was going on. The story is told with still portraits and text boxes, and does little to explain why kids need to help robots, why the robots exist in the first place or how the generic evil you are supposed to fight fits into the plot. If the game is aimed at fans of the show or toys i.e. kids), then I have to assume they'll be at least as confused as I was.

Who cares if the gameplay is good, right? Too bad things fall short here as well. After selecting your Tenkai Knight, you are set up in an arena that vaguely reminds one of the old single-screen Super Mario Bros. arcade game. You must kill a certain number of baddies within a certain time limit to win the stage and move on. Here's the thing - nearly every stage in the game is almost exactly like the first. Watch unskippable "cutscene (text and pictures)," enter stage, kill X number of bad guys and prepare to do it all over and over again. Seriously - that's all there is to it. Free mobile games from the early days of the App Store have more depth and playability. 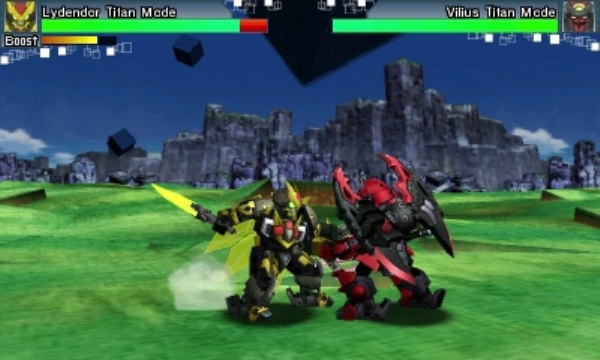 To make matters worse, your Tenkai Knight controls about as well as a protagonist from the original Resident Evil with two broken legs. Movement is extremely slow and jumping is a pain. Even attacking, monotonous two button mashing, is slow and clumsy. And since there is considerable knockback when you are hit, you can be trying to get on level ground with a bad guy only to have him knock you back off a ledge until you die. Its frustrating and annoying; so much so that even underage fans of the show will probably toss the game aside within an hour of buying it.

Remember how I said that the box promised customization? It's true; you can customize your characters, but the system is just a mess. Defeating enemies yields nondescript little items, and it is anyone's guess as to what block does what. You can somewhat decipher it by experimentation on the customization screen, but nothing is ever explained. Also, getting the blocks you need is extremely tough due to the unforgivably low drop rates. So technically the box was dead-on, you can customize the Tenkai Knights. You just won't want to.

It occurs to me that I should be even angrier with Tenkai Knights: Brave Battle than I already am for ruining my Friday. On top of that indignity, I've now spent an hour explaining why the game falls short. This is the very definition of lazy tie-in game, and one I wouldn't recommend to anyone I wanted to speak with again in the future. Check out the physical toys instead.