Mario and Donkey Kong: Minis on the Move Review

Mario and Donkey Kong: Minis on the Move is a puzzle game in which the goal is to provide a safe path through a level for windup toy versions of Mario, Peach, and other characters. The initial mode features Mini Mario and has you placing tiles containing path segments onto a grid in such a way as to allow Mini Mario to pick up bonus stars and avoid traps as he makes his way to the goal. The challenge in the game comes from: 1) the path tiles that you are given to work with are generated at random and if you let the incoming tile queue overflow you lose, and 2) once a mini starts going there's no stopping it. The way that the tiles are distributed makes this an arcade puzzle game along the lines of Tetris rather than a leisurely paced thought exercise. Unlike Tetris, though, recovering from a run of bad luck with the tiles that you receive is almost impossible, and a large proportion of your failures will come from being dealt a bad hand. 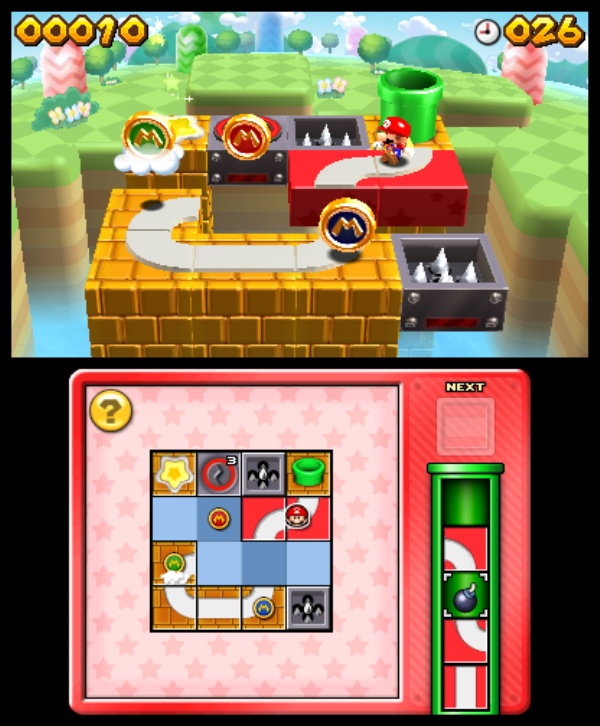 If the random tile aspect of the Mario puzzles doesn't suit you, the Mini Peach puzzles may be more to your liking. These are a variation on the theme in that you're given all of the tiles at the start of the level and you'll be able to take a little time to place them all before Mini Peach begins moving. The Mini Toad puzzles also give you all of the pieces up front, but in these puzzles you'll have to move the tiles as multiple minis wind their way through the course. Lastly, the Mini Donkey Kong puzzles emulate the Mini Mario puzzles, but on a much larger scale. Having a larger playing field certainly helps you to have more places to put unwanted tiles from the queue, but it also means that you can paint yourself into a corner pretty early on and not realize it until you get near the end. The balancing act of managing so many tiles while also trying to think very far ahead makes these puzzles the game's most challenging.

Minis on the Move is structured very much like a smartphone game, with three-star ratings on completion of each puzzle and the successful completion of a puzzle unlocking the next one on the grid. In fact, it feels like a smartphone game since all of the play is contained to the touchscreen and the 3D screen is completely ignored until it's time to sit back and watch a mini do its thing.

Rounding out the gameplay is a collection of slingshot and crank mini games that are included more to fill out the gameplay than to provide more variations on the main theme. You use the touchscreen to launch minis at targets on the 3D screen, or turn a touchscreen crank to raise and lower Mini Mario to grab items while avoiding enemies. They're the sorts of mini games that are fun for a couple of go rounds, but are not compelling enough to keep you coming back once the novelty wears off. The game also includes a nice level editor that lets you create and share levels with others, although only the Mini Mario style puzzles are supported. 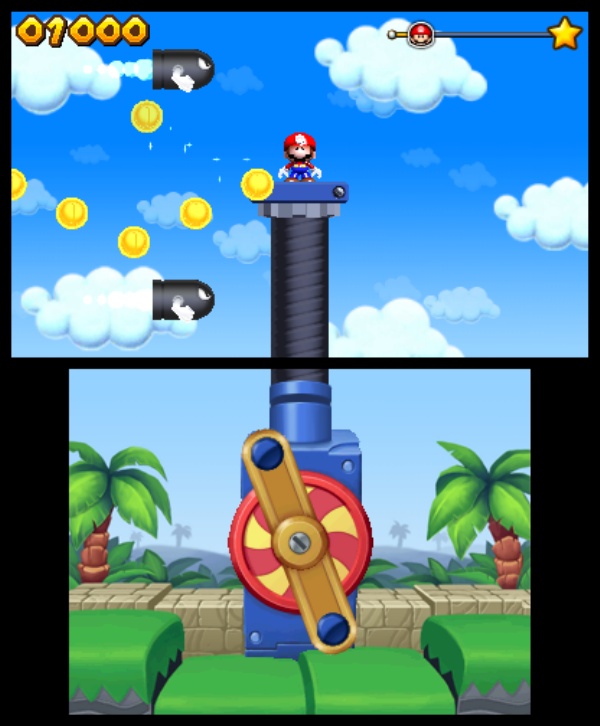 Overall the game feels like just an average entry in a crowded puzzle game market, not just with the smartphone games Minis on the Move feels like it is emulating, but on the 3DS as well. The way the difficulty of the puzzles quickly increase means that it will be too frustrating for the younger gamers who will be drawn to it by the appearance of Mario and Donkey Kong. This one is best left to the puzzle game enthusiast who knows that some frustration just comes with the territory.

Final Rating: 68%. A 2D tile moving puzzle game that's not for everyone.