Luigi certainly fulfills the role of the reluctant hero. Filled with a healthy fear of ghosts and a Dr. McCoy like distaste of teleporters, he nevertheless allows the perpetually peppy and perhaps slightly mad Professor E. Gadd to beam him directly into haunted houses to cleanse them of their ghost troubles. These ghosts were once the professor's playful and benign assistants, but the Dark Moon that kept their dark sides in check has been shattered and its pieces have been scattered across Evershade Valley. While the Professor monitors the situation from the safety of his bunker, he sends Luigi into the mansions of the valley to find the pieces of the moon, round-up the mischievous ghosts, and try to restore Evershade Valley to the way that it was.

Luigi is sent to the haunted mansions armed with the Poltergust 5000, a vacuum cleaner developed by the Professor that has the capability to suck up ghosts. The ghosts won't stand still for you as you try to vacuum them, though. First you'll have to find them as they turn invisible or hide inside objects in the room while avoiding their direct attacks and any objects that they throw at you. Then you'll have to momentarily blind them with the Poltergust's flashlight attachment. Once a ghost is blinded you can point the Poltergust at it and begin trying to vacuum it up, but it won't go easily. You'll need to win a tug of war with it as it struggles to free itself of the suction and make sure that it doesn't pull you around the room. 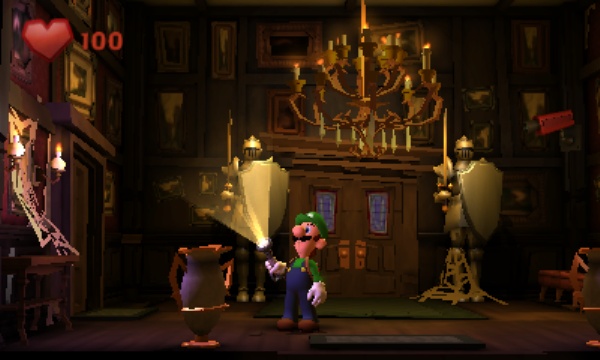 There's more to the game than straight ghost-busting, though. The rooms of the haunted mansions are filled with interactive objects and secrets that reward players who take the time to do a little exploring. Some of the mansions' secrets are necessary to completing your objectives, such as finding secret passages into otherwise inaccessible rooms or solving puzzles to obtain keys to locked doors, but others will reward you with coins and money to be spent on upgrades to the Poltergust or dog bones that will give you a second lease on life should you lose all of your helath on a mission. The Poltergust often plays a role in solving the game's puzzles, as you can use it to pull down curtains and roll up rugs among other things. It also runs in reverse, effectively turning it into a blower which can spin ceiling fans or blow out fires. Busting ghosts is fun, but it's also enjoyable to try and find all of the secrets in the mansions, whether they're needed to complete a mission, reward you with money or health, or are simply put there to reward your curiosity with a little humorous interlude.

This exploration is made all the more enjoyable by the game's attention to detail and graphics that are among the best I've seen in a 3DS game. The 3D is used perfectly to bring the mansion rooms to life and it gives them the look of little exquisite dioramas or meticulously detailed rooms in a dollhouse. The lighting effects are also impressive, from the Poltergust's light attachments to the glow of fireplaces and candlelight to the spooky aura of the ghosts themselves. The game's sounds and music are also worth noting; especially since I loved that Luigi would occasionally hum along with the background music. 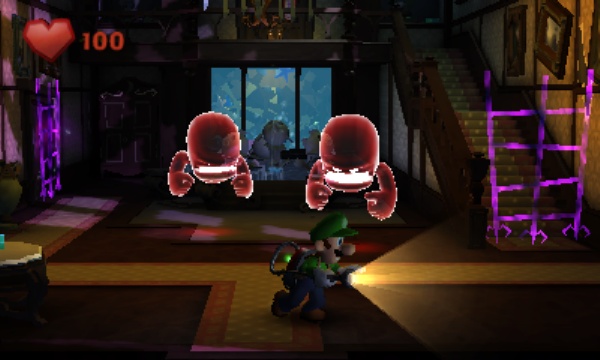 The game has been designed with mobile play in mind, dividing your time in each mansion into a series of missions. While this means that you'll revisit some of the rooms a number of times, the game will open up a little more of each mansion with each subsequent visit and the locations of hidden coins and hearts will be restocked and shuffled around. The missions can also be replayed at any time and the game will tally your performance each time, so you have the opportunity to better your mission scores if you want.

The game also includes a multiplayer mode in which up to four players must work together to clear the floors of an additional haunted mansion. This mode focuses on ghost-busting over exploring and puzzle solving, but a ghost round-up among friends can be a lot of fun. The key is that you have friends to play with, though. The multiplayer mode lets you create and join games over the internet, but you have to be extremely patient because you'll spend most of your time in this mode connecting to games and being immediately dropped than you will actually playing the game. Overall, Luigi's Mansion: Dark Moon is very easy to recommend. It's fun, charming, and one of the best games available on the 3DS. I just hope that we won't have to wait another twelve years for the next game in the series.

Final Rating: 94%. Nintendo's Year of Luigi is off to a great start.