This is a tough one, guys. I've been playing the new 3DS Animal Crossing, called Animal Crossing: New Leaf, on a daily basis for about three weeks now. In that time, I've set myself up a nice little town, built and paid off a home, enacted ordinances, shopped, caught bugs, fish and sea creatures, visited a distant island, bought clothes and furniture, dug up fossils... pretty much everything there is to do in the game. Reading back over that little list, it doesn't sound very interesting; I've fought no evil power, saved no people or worlds or even used a weapon. All I've done is conduct semi-normal day-to-day suburban business, stuff I do in my everyday life (I don't do all that stuff every day, but you see what I'm getting at). So why, then, do I continue to come back to the game over and over? There is something compelling and hypnotic about Nintendo's series of everyday life simulators, and Animal Crossing: New Leaf is no exception. I'm just not sure how much actual fun I've had playing the game, and that's what makes this review so difficult to put together.

Even though I just described it, here is what to expect with New Leaf. You are cast as the mayor of a small plot of land and it is your job to turn what starts as a few odd houses into a bustling town. To get things going, you'll need two things: time and money, called bells. You start by plucking fruit from trees and shells from beaches and selling it to Re-Tail, a second hand shop/flea market that is always ready to buy back any crap you may pick up. Eventually, you can buy a shovel, for digging up fossils and other junk, a bug net, for catching bugs (duh) and a fishing rod, an item that has exactly the functionality you might expect. You can sell the commodities gained from using these items, or you can donate them to a local museum. In the find/buy/sell/donate grind, you'll have other priorities to worry about as well. You can keep your growing population of animals happy by helping them out with various tasks. You can plant flowers and trees while digging up weeds. You can build public works projects, like bridges and lampposts, by soliciting donations to a works fund (and paying a hefty amount yourself). You can visit a nearby island to catch different varieties of bugs and fish, as well as fruit that may not be native to your hometown. You can swim in the ocean (when you acquire a wet suit) and search for sea creatures. You can buy, sell and design your own clothes. You can build, pay off and expand your home, lining the walls with found goodies and purchased furniture. No one an accuse New Leaf of a shortage of things to do, that's for sure. 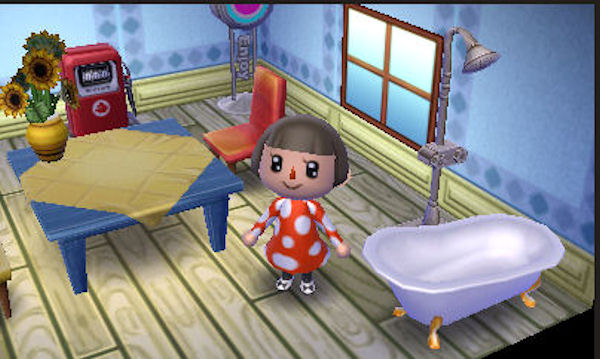 But here's the thing: The game runs on a 24 hour clock, which can throw a wrench into how much time you can really put into the game per day. Yes, I know you can fiddle with the 3DS' internal clock, but I never did - it felt like cheating and I shied away from the exploit. During your first hours and days with the game, there is plenty to do to drain your 3DS battery. You can play for hours on end getting things set up the way you like them. Once you settle into a routine, however, you are really strangled by that clock. You can only find just so many fossils per day, and the same goes for shells and fruit (bugs and fish respawn constantly). Stores restock every 24 hours so if you've seen what they have, there is no reason to return until the next day. Lots of projects can be started one day, but don't go into effect until the next. This translated into me playing for 30-45 minutes before I ran out of stuff to accomplish for the day. Whether I wanted to keep playing or not, there just wasn't anything else to do. My wife, upon seeing me play, has taken to calling my short bursts of New Leaf gameplay "doing my chores." And at times, it feels like just that - chores. But we will get there in a moment. Back to the clock, another issue is how the clock controls the economy. Stores are only open during the day, so people with families and jobs might end up missing out on the opportunity to buy or sell stuff when playing at night. There is still some room for late night players to accomplish most things, but economics flies out the window between the hours of 9 pm and 11 pm (and until 8 am and 10 am the next morning). After you've been playing for a while, you'll have the ability to enact an ordinance that makes stores stay open a little later, but it still won't be enough for true night owls. Running out of things to do for a 24 hour cycle is far more annoying than missing business hours, but both feel obnoxious enough to warrant being mentioned in this review.

I can already hear people protesting, "Online, good sir! You may run out of stuff to do in your town, but what of the online game?" Hey, I thought that too, OK? First off, you've got to play a little way into the game to access the online mode, a good decision in my book. It gives the player time to get things sorted out at home before letting them venture to other people's turfs. Once you do open it up, all but the most extreme apologists will be disgusted with what they find. Two words: friend codes. To visit another town, you must have that player's friend code, a garbled set of 12 numbers specific to each 3DS and game. This flat out sucks. Imagine the possibilities of being able to jump freely from town to town, interacting with residents and sharing goodies. Nintendo could have had an open MMO-like setup with endless possibilities. Even a more guarded setup, with user-published towns on a central server, would have been great. Instead, we are left with a neutered online mode that will require entering too many numbers just to pay a simple visit to a friend's village. After seeing what Sony did with the Vita version of Little Big Planet, or what Nintendo themselves did with the online portions of the DS Pokemon titles, this kind of online mode seems cheap, dated and worst of all, no fun. Online could have padded out the per day gametime, but friend codes make it a lumbering, ancient dinosaur of a mode, one that really isn't worth anyone's time or attention. 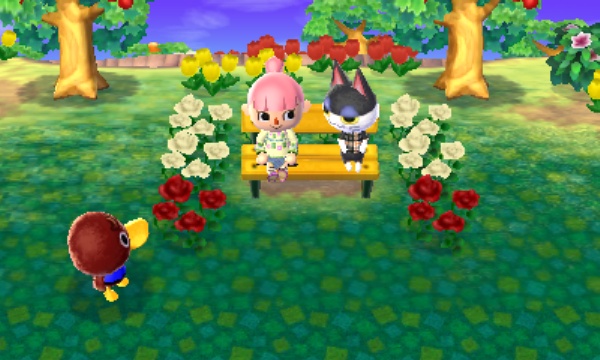 As I said earlier, I was compelled to keep playing New Leaf, despite the fact that I never really felt like I was having much fun. The game has a hypnotic effect, stirring the deepest depths of my gamer compulsions. There is no reward for anything you accomplish, save for an expanded list of things to accomplish. I never said to myself, "Hey, I can't wait to play Animal Crossing!" It was more like, "I'm sick of dying in Donkey Kong Country Returns 3D, I may as well do my Animal Crossing maintenance for today. Sigh." And that is what New Leaf becomes - a game of maintenance. Paying off loans, selling junk for bells, fishing, none of it ever thrilled me. But filling up the encyclopedia, which catalogues species of fish, bugs and sea creatures, and the museum, home to those fossils you'll dig up, has a way of eating at you, driving you to seek out that next new organism. After my wife starting referring to the game as "doing my chores," it hit me. New Leaf is a lot like managing a real, adult life. You may not want to paint the garage or go shopping, but you do it anyway and maybe you even get a small thrill from a job well done and a life responsibly lived. New Leaf is life, and though somewhat satisfying, it is never all that exciting.

Before I wrap things up, I wanted to urge Animal Crossing fans and prospective fans alike to a single action: Purchase this game through the eShop, rather than at retail. As I said, daily gametime is fairly limited. Having it at your fingertips at all times is a much better solution for New Leaf. I doubt I would have put in anywhere near as many hours if I had to switch game carts, and I assume a lot of people will fall into the same camp. Can you imagine you'd have had anywhere near the amount invested into Puzzle Swap or Find Mii if you had to hunt down a game card each time you got a new Streetpass? No way. New Leaf follows the exact same principle: a longer form game that requires intermittent checks over marathon gaming sessions.

How can I write a review for a game that has easily eaten up hours upon hours of my life (a positive) but at the same time often felt like a chore to play (a negative)? The answer is to take myself out of the equation. I see and recognize the Animal Crossing: New Leaf is, at its core, a very good game. Fans who have been counting the seconds until release are sure to be satisfied with the game, pouring in hundreds of hours over months at a time. New Leaf has an addictive bent unmatched in most other titles, and it will keep those even mildly interested coming back for days and days. Friend codes absolutely and unquestionably decimate any fun that could have been had with online play, but other than that everything is exactly what people want it to be and more. I may not have been thrilled with New Leaf, but that certainly doesn't mean you won't be.