The first thing that came to mind when I heard of Paper Mario Sticker Star was how well a 2D game would look in 3D. After playing the game, I can tell you that it looks quite good actually. Mario and all of the characters are flat (they are stickers, after all) as are the various flora and fauna that inhabit their world, but that world itself is 3D. The effect is like looking at a paper diorama or a shadow box, and it gives the game a unique and charming look. I also enjoyed the character animations, which looked a bit like watching flipbook animations without the flickering, and the way that the characters would flip to their other sides when changing direction.

You can probably predict how things open in the game. Princess Peach and her mushroom subjects are enjoying a festival, which is completely ruined when Bowser shows up to try and get his hands on the magical Sticker Star. The Sticker Star gets shattered, Peach gets kidnapped, and it's up to Mario to rescue the princess and set things right in the kingdom again. Teaj, if's a lot like the story in every Mario game, but you wouldn't have it any other way, would you?

As for gameplay, if you haven't played a Paper Mario game before you might be in for a bit of a surprise. Paper Mario Sticker Star isn't the platform style game that's pretty much synonymous with Mario for years. As a matter of fact, it shares more with tactical RPGs than it does with other Mario games. 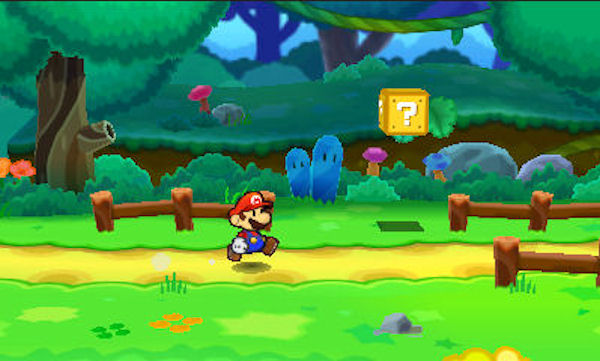 As you explore the game's world and come across a koopa troopa or other foe, your first instinct as Mario will be to jump on its head. You can still do that in Paper Mario Sticker Star, and in fact you should as it gives you a first strike bonus, but as soon as you do you move to a battle screen for some turn-based sparring. This is one of the places where the stickers you collect as you play the game come into play. Some of the stickers represent various jump and hammer attacks, as well as other types too numerous to list here, and when it comes your turn to attack you select the sticker you want to use to attack your foes. The battles are more participatory than they are in most turn-based RPGs, as you need to time your press of the attack button at the right moment to get the most out of your strike. Also, when it comes time for you to defend, if you press the block button at the right moment you can minimize the amount of damage that you take.

These battles are fun, primarily because the game just takes what's fun about tactical RPGs and eliminates all of the bookkeeping that goes with managing parties, inventories, and experience levels. The result is that all of the battles play out pretty quickly and don't bog down the rest of the game and the fun that comes with exploring its worlds and finding its secrets. On the downside, if you lose one of these battles it's game over. When you restart your game, you'll lose all progress that you made in the world in which you lost the battle. This can be a little annoying, to say the least, but it does make you take the battles more seriously.

Boss battles are a different matter entirely. They're still turn-based affairs that play out like the other battles, but bosses are so loaded with hit points that the battles can turn into long, drawn-out battles of attrition that can burn through your entire collection of stickers. There are special stickers in the game that make the boss battles easier, but you need to find these rare stickers in the first place and then know which one to use against a particular boss. The game will give you a hint as to which sticker is needed against a particular boss, but not until you're well on your way to losing your second fight against the boss. Sure, boss fights should be challenging, but not necessarily because the game is withholding vital information from you. 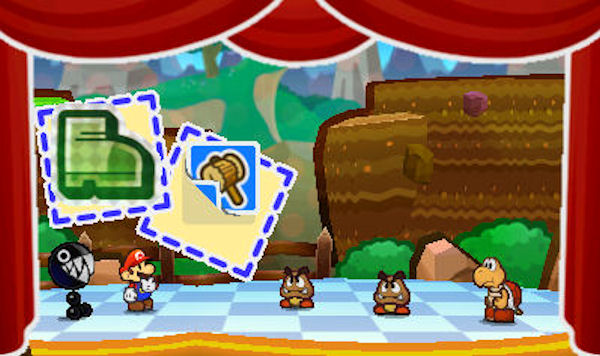 The stickers also come into play outside of the battles. With the press of a button you can "paperize" the game world, which flattens and freezes everything. While you've got things flattened you can place stickers or special items into the world, which is the primary way in which puzzles are solved and secrets are discovered in the game. It's a fun mechanic, but, like the boss battles, the connection between the puzzle and the right sticker or item to use can be obtuse at times.

Even when it was at its most frustrating, I found it hard to stay mad at Paper Mario Sticker Star for long. The game world was just too charming, the dialog too humorous and offbeat, and the gameplay simply too unique to let the game's shortcomings sour my overall experience with it. As long as you're OK with the turn-based battles and have some patience for puzzles that aren't always intuitive, you should have plenty of fun with the game.